It has been a year and a half since I last had an English Conversation Class and it was so nice to get back into the saddle with this great group. I unfortunately do NOT have any photos of us, so you will have to take my word for it. There were 10 students who started and only 5 came enough to get certificates, but all of them enjoyed the time together. I was helped by another native-speaker living here in Banja Luka, and that made it easier for me and also a bit more fun as well. I did a test at the end and the 5 students were almost all at different levels ranging from pre-intermediate up to advanced, but the way that we do the classes actually works well even for a range of students like this. It was just so interesting to see that they were soooo different.

So what do we do? We do activities to try and get them to talk English as much as possible. To actually try to get them to switch over into thinking in English and not just translating in their heads. This works better with the upper-intermediate and advanced students of course, but it also helps those who are not as advance a chance to improve their English. We actually started with 2 more students who came to the first class and were not able to converse at all, and this format is not able to help them - they have to have a certain level (pre-intermediate) to be able to do this class...

We play games, do speed dating style talking activities (this is actually my favourite as they ask the same questions and have to answer them each time as well - and repetition is the best way to learn!), mingle activities, group activities, pair activities... we usually focus on a topic or a grammar point (sometimes both!) and have a lot of fun!

Learning another language is never easy and the motivation to learn needs to come from the students themselves and those that do the best are the ones who have that motivation! I love teaching English and helping others not only improve their English and chances for a better job, but also just encouraging them to be motivated not only in learning English, but also in the rest of their lives as well!
Posted by beeinbosnia at 10:37 am No comments:

Instead of having Book Club at the Home for two weeks, we took two groups of around 15 children to the Children's Theatre to watch shows there. The older kids went first, and of course I didn't get a pic with them - but they had a good time. We walked into town (about 20 minutes) and back (and also a bit around town - more about that later) which made it more fun (they are 11-15 years old so can handle it!).

After the show came out, I wanted to treat them to something (usually in the summer we do icecream, but it is November, so it is a bit too cold!) and I spotted a lady selling popcorn. Perfect! We had hung around at the theatre afterwards, so we were some of the last to leave. When she heard we were from the Home she also gave us the leftover popcorn as she was heading home... This was the start of the kids eating a LOT of popcorn... one of them came to me and said "it is magic, I keep eating, but my popcorn box is never empty". So cute!

The funnest part of the evening for the kids was when 5 of them and a volunteer went running around a department store trying to track down one of the contestants on a local "The Voice" equivalent to get photos with him... luckily when they tracked him down he was quite a obliging! The rest of us waited outside (wondering what was taking them so long!) and eating popcorn...

The next week we took the younger kids - this time it was colder and so we didn't walk, but got a ride! But we were lucky in that there was a special celebration of "Preemie Day" so there was lots of food and drinks after the show... but we still found the popcorn lady and made her day by buying popcorn (and she again made ours and gave us the leftovers!). 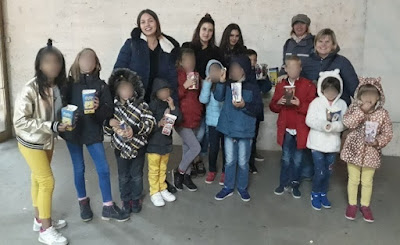 This time the play was "The Frog Prince" (or as they called it "King Frog") and I unfortunately missed the part where the Frog is kissed as I was taking 4 kids to the toilet... oh well. As you can see we also had a few volunteers join us, not like 2 years ago when through various misunderstandings I was left with 14 kids by myself... The Children's Theatre also deserves a big accolade as they provide the seats for us free of charge!! And that means a LOT!
Posted by beeinbosnia at 11:10 am No comments: