As I am part of the Bosnian National Team for Samaritan's Purse's "Operation Christmas Child", this year I went to the IConnect conference held in Toledo, Spain with 3 of my fellow team members. Here we are below with our colleagues from Montenegro, Macedonia and Serbia. Yes, we went all the way to Spain and hung out with our local colleagues :) 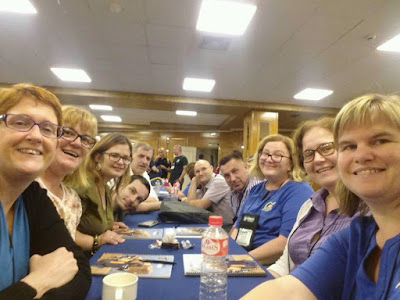 This year was also Elvira's first time and she asked me to also dress up in National Costume so she wouldn't be alone. this was meant to be for the first night along with everyone else, but our flight was delayed and then our luggage lost, so we didn't get to do it then... but we were determined to do it anyway and it was really fun: 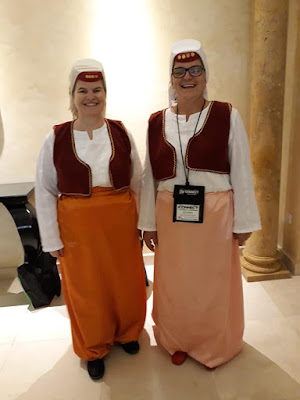 Here are all of us from Bosnia and Herzegovina together with the OCC mascot! 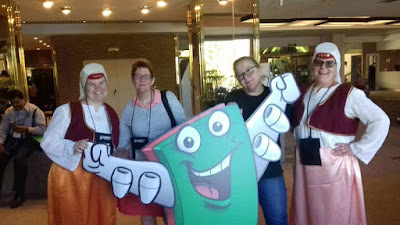 The conference was huge - over 500 people from 60 nations. We had corporate sessions in the morning and evenings and then workshops in small groups the rest of the day. It was long days, but we had a great time!

One evening we were able to go to Toledo - and we took the little train up to the hill overlooking the city and got some great views of this Unesco World Heritage City, before exploring the city further and then having a little adventure getting lost trying to make our way back to where we could catch the taxi home! But we made it back safe and sound in the end... 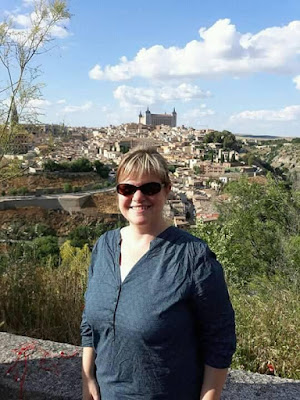 After the conference, we all flew back to Sarajevo, and as it was my birthday the next day, everyone arranged to stay on and celebrate with me... Yay!! We were joined by Carolyn (and Elvira opted out) for the trip up the mountain on the newly redone Cable Car: 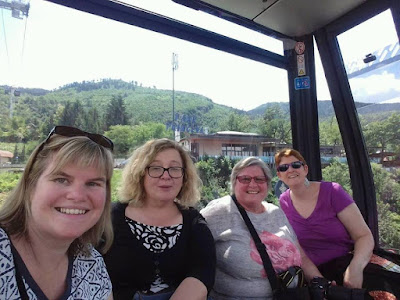 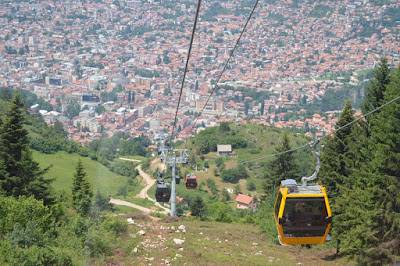 Here I am in one of the old cars - the original Cable Car was made for the 1984 Sarajevo Olympics and then unfortunately it was destroyed in the 1990s war, so it is nice to have it up and running again. 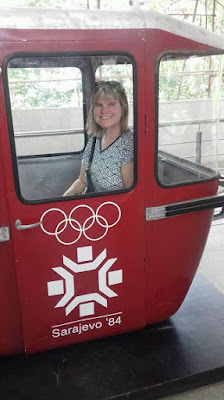 Then, instead of travelling from Sarajevo to Banja Luka (5 hours by train) and then onto Budapest (12 hours on bus and train), I just flew on a Wizzair cheap flight to Budapest... and stayed with my friend Marie (and got to hang out with some other people as well which was great - but I don't have pics of that). 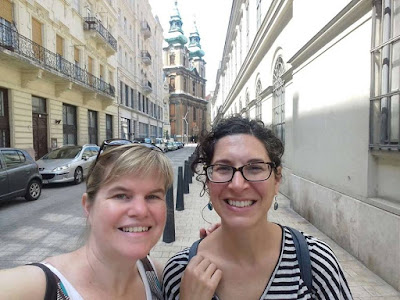 The reason for going to Budapest, was actually to take advantage of cheap flights to my next destination, Tallinn, Estonia, another Unesco World Heritage City!! (I should call this post from Toledo to Tallinn, seeing World Heritage cities across Europe!) 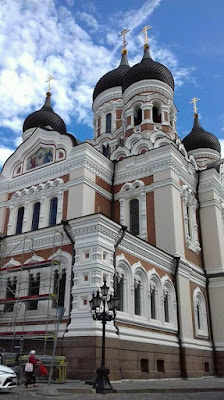 But you can see why it is a world heritage site... above is the Russian Orthodox church and below is one of the city gates that is still there - they have more that 80% of them, which is amazing for a medieval city! 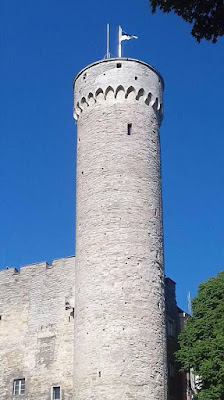 A view from the walls out... so pretty: 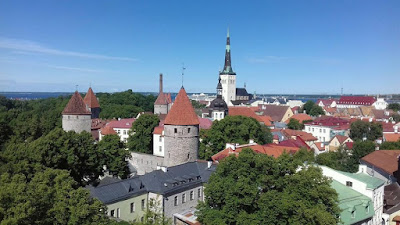 This was part of the walk from where we were staying in the middle of old town to the place we were meeting... 2 years ago when I was here, I could barely make it up the hill... now 15kgs lighter and little bit fitter, I was able to make it up, sometimes twice a day, with no problem... so I was happy about that :) 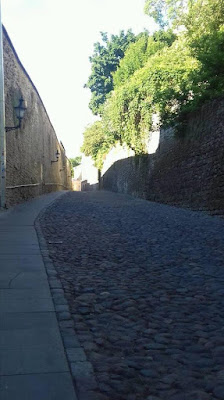 The reason I was in Tallinn, was to spend time with these great people: The European Leadership Learning Community. I was part of the staff team for this event which was so fun. I love this group! 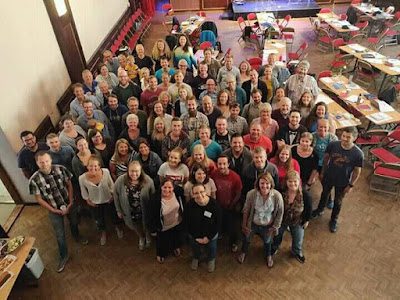 We had two very different, but amazing teachers. One was Ben Fitzgerald from Awakening Europe: He was more inspirational... 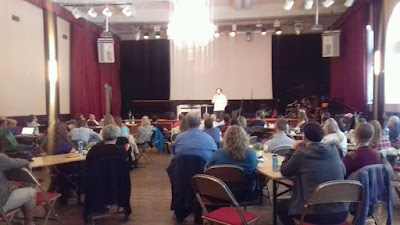 The other Oivind Augland from xpand Norway: He was inspirational, but also so very practical. Loved it! 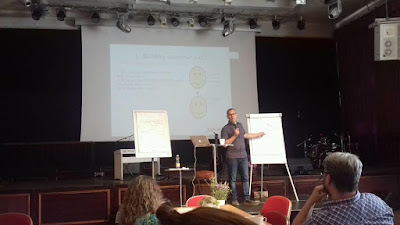 We did have time for a little RnR... playing games in the park. There were some interesting ones like the one below... It was so much fun! And if you want interesting games, get a Dutchie to organise it! 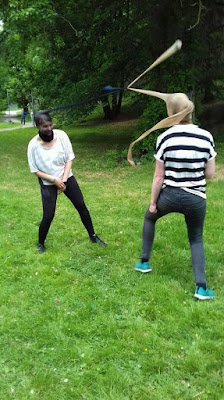 During the week, I also got to hang out with my Estonian/Bosnian friend, Jael. She lived in Bosnia for 17 years and left last year in October to return to Tallinn. She took me to the medieval restaurant "Old Hanza" which was amazing... 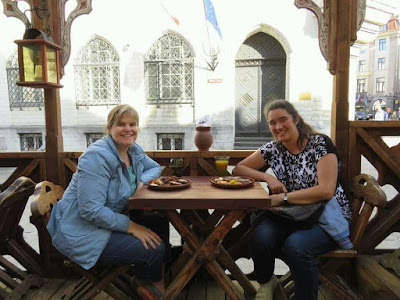 The sausages were bear, moose and wild boar!! All the food are things that they would have eaten in medieval times... such a fun experience! 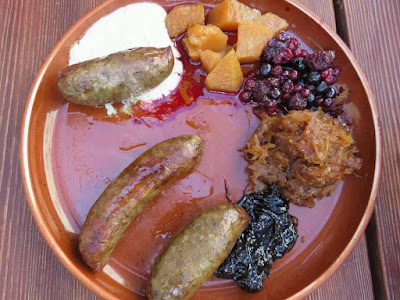 After 3 weeks, 1 5 hour hour train trip, 9 flights ranging from 1 to 4 hours, 1 5 hour bus trip, and many other forms of transport including the Cable Car, I met up in Zagreb with Ljilja and Sina and we hung out for a bit before Sina left... and then Ljilja and I picked up my MOM for her to come to stay with us in Banja Luka... but more on that in another post :)
Posted by beeinbosnia at 11:10 am No comments: