I first must confess that I decided to get this book to review through Netgalley as Rachel is a good friend, and I even helped with some of the words in Serbian in the book. I also remember her telling me enthusiastically about some of the different parts she was writing, which made reading the book even more fun. I loved her first book Ascension of Larks and so was looking forward to reading this one and so grabbed the chance to review it before it even came out!!

And I COULDN'T PUT THE BOOK DOWN! The characters are so well written and the plot so gripping, that I just kept on reading and reading... and it was a problem as I was supposed to be doing other things!!!

Some of the book is set in my part of the world (Central Europe) and deals with the terror that is human trafficking, but the deeper story of the two sisters and the in-depth look into their lives as individuals and how they interact as sisters made me reminisce about my relationship with my sister and brother and made me realise I could be doing better...

And that is the point of the book. It isn't just a good novel or a gripping read, but makes one think more about the wider world as well as one's own relationship circles. Knowing Rachel, I know this was done delibrately. This is the kind of book you read for distraction, but also to make you think. She really got the balance right. And of course her writing is amazing and throughout the book I am imagining myself in those places and with the characters involved.

The book is coming out in May, so don't delay, get your copy while you can!!
Posted by beeinbosnia at 8:35 am No comments:

We ran a Faith and Conflict in 2014, and Jonny Clark from YWAM Rostrevor has been on me ever since to run another one. I never felt it was the right time until this year. This year, the Discipleship Training School (DTS) that is being run in Croatia is focusing on Bosnia Herzegovina and Serbia as well, and so we decided that this week long conference would be part of the DTS and we would also see if anyone else wanted to come along for this journey of understanding... and they did!

Even though Jonny couldn't come at the last minute, and he was supposed to be the main speaker, everything still turned out OK. We had great local input from different people telling their stories, from how they were in the army from the beginning to the end of the war without having a gun to dodging bullets in Sarajevo, to becoming a refugee. We also had two great speakers from Northern Ireland fill in for Jonny: Walter and Alex, and they shared more about the topic of reconciliation and the key role of forgiveness.

We physically (as well as mentally and spiritually!) went on a journey through Bosnia and Herzegovina, starting in Banja Luka: Here we are in front of the Orthodox church. 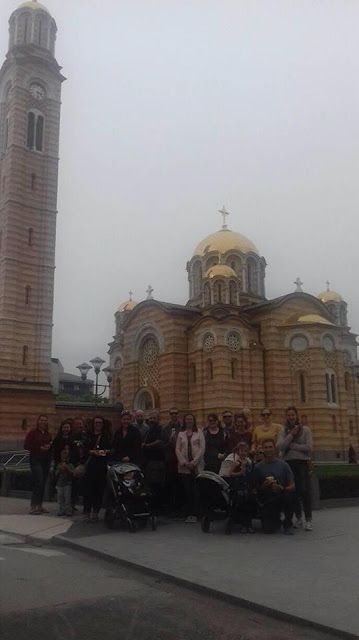 Then moving to Sarajevo - where we enjoyed some better weather :) 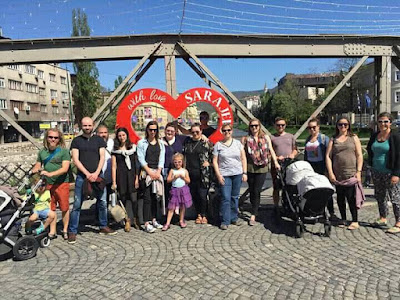 We finished off in Mostar, and were so impacted by how divided the city still is. One of the people telling their stories said "here the war hasn't ended yet". It just brought home how much still has to change here. 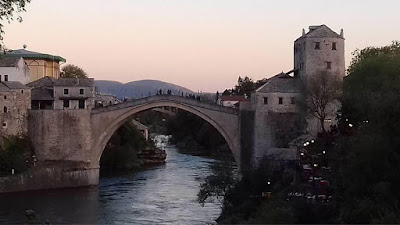 For me, it was so impactful how we kept taking the BIG picture and then making it personal. So, conflict happens between people groups when there is an "us" and a "them" and the same thing is true in our lives. How much do I make a difference in my own life between a group I am part of and a group I am not part of. A silly example was when one of the girls started bragging how much better it was to be on the top bunk (we were sleeping in bunks in one of the churches in Sarajevo) and those people on the bottom bunks were all losing out... There was the us and them!

In our lives, we need to be living not with us and them, but just us... we are all in this together and need each other to get along. It is easier to build walls than bridges - but we need to build bridges to survive!!

It was a fantastic week, and even though there was a lot of work to organise all the logistics in 3 cities, it was worth it to show everyone the riches of beauty in this country - not just in the physical geography, but also in its people!
Posted by beeinbosnia at 2:32 pm No comments:

At the end of March, we had two wonderful teams come and serve us in Banja Luka. First, a team of 17 youth from different churches from Austria came to spend 4 days with us before moving on to Tuzla: 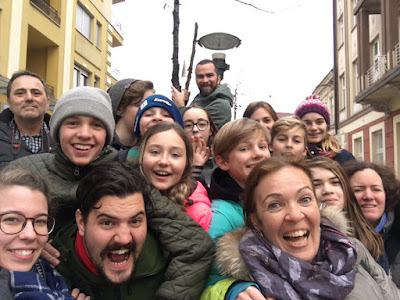 While they were still with us, a team of 16 young people also from different churches came from Norway to spend a week with us. 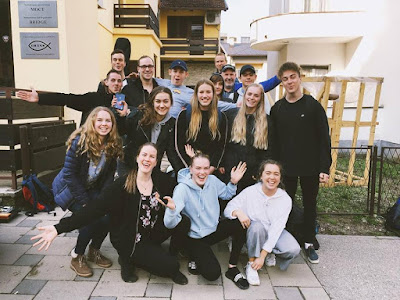 Both teams helped us give out "Easter" packages (which were actually shoe-box Christmas packages) both at the church and at schools in our surrounding villages. It was a jam-packed week, but the joy of the Easter message was shared to many children!

We did two big distributions in the church. One with just the Austrians: (here sharing about Austria) 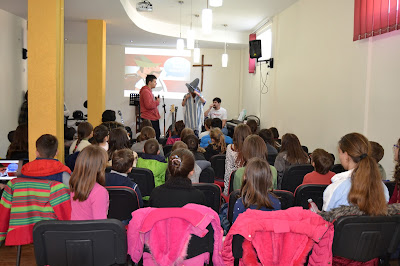 Before having crafts about Easter and fun games: 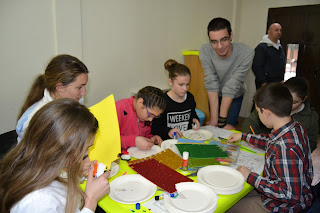 At the end we gave out the packages, to everyone's delight :) 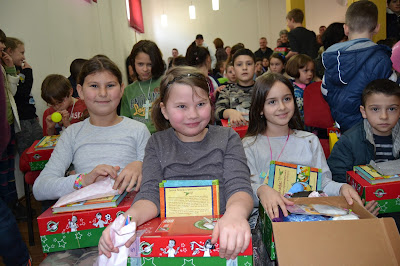 We also gave out Children's Bibles which were a great hit: 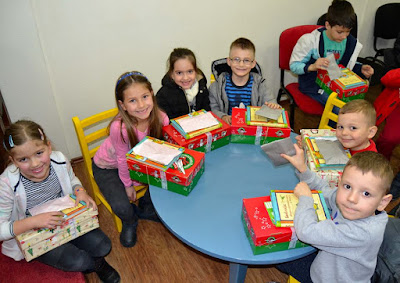 The second day we did the same thing, but were joined at the end by the Norwegians (they were supposed to arrive earlier but were delayed at the border as they didn't have the right papers for their bus. In the end they were fetched from the border and we managed to -by God's grace and Ljilja's charms- to get the bus in the next day!)

They added some songs: 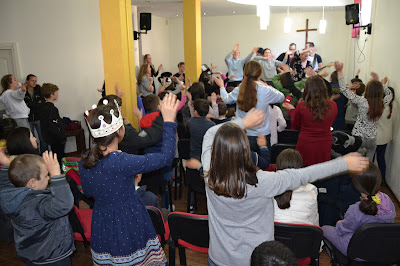 And a couple of dances to the mix: 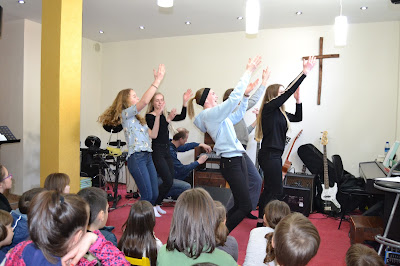 During both programs, the parents were upstairs having their own program about Easter: 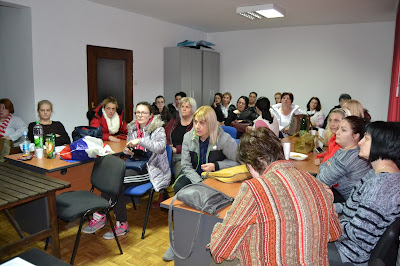 We also took both teams separately to the Children's Home to have a program there: The Austrians shared about Austria: 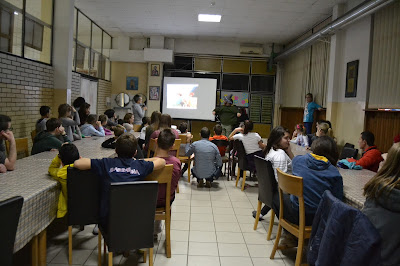 Before each child was given the chance to decorate a photo frame: And the team even had a photo printer, so they could have a photo in the frame: 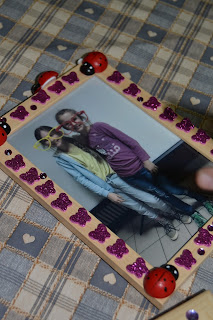 Along with some funny glasses, so as to make it even more special: 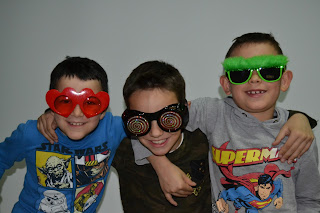 As you can see, the kids really enjoyed this! 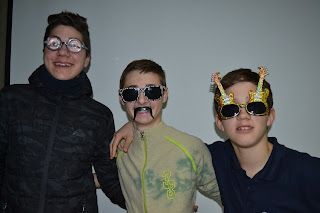 The Norwegians went later on in the week, and had a great program, including songs and dance, and even a magician (me translating for him below): 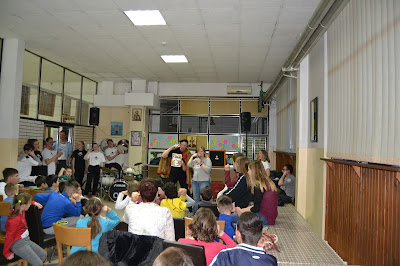 And the kids really enjoyed the singing and dancing! 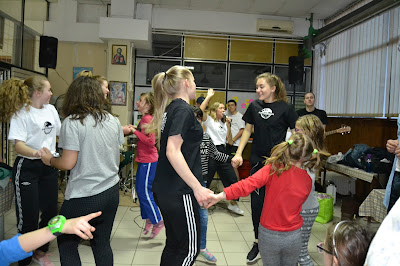 During one of the overlap days, we had a joint cultural evening where we learnt the different ways that Easter is celebrated. At the end, the locals shared their tradition of "egg-hitting" where you hit each other's eggs and the one whose egg survives gets to take the other's egg. 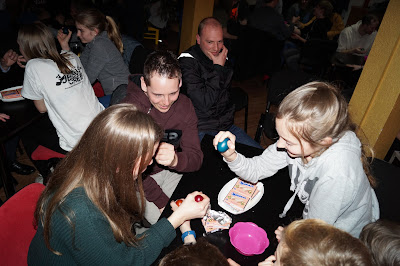 Here is a battle between a Norwegian and an Austrian... they really enjoyed learning about this local Easter tradition! 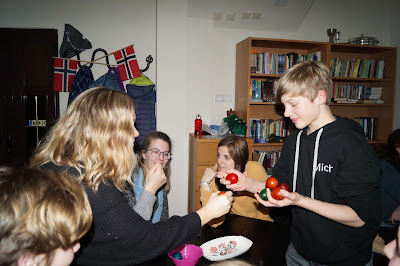 The rest of the week, while the Austrians went to Tuzla and carried on their outreach there, the Norwegian team went to small village schools to give out "Easter" packages. And everyone had a great time: 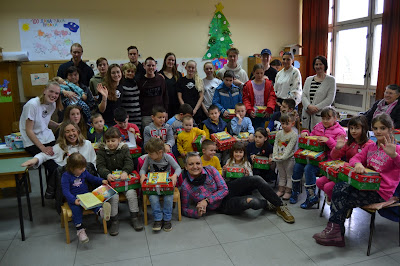 It was a busy, but fun week for us, and we look forward to when both teams can come back!
Posted by beeinbosnia at 9:15 am No comments: