Even though I am part of the Central European area of YWAM, as part of my role in leadership, I am invited to be a part of the WELG (Western European Leadership Gathering) which is held every other year. This year it was in Geneva. There were about 300 leaders from all over Western Europe (and about 20 of us from Central Europe). (See if you can spot me in the middle next to the lady in turquoise :) 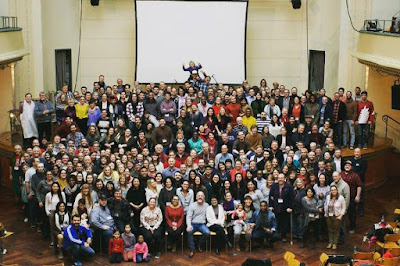 The key note speaker was Vishal Mangalwadi. It was amazing to hear his teaching again, as I was privileged to have him speak on the Community Development school I did in 1999 in South Africa. He spoke on two days, and the rest of the week we had other YWAM leaders sharing - from Jeff Fountain to Tom Bloomer - and it was a very encouraging time! 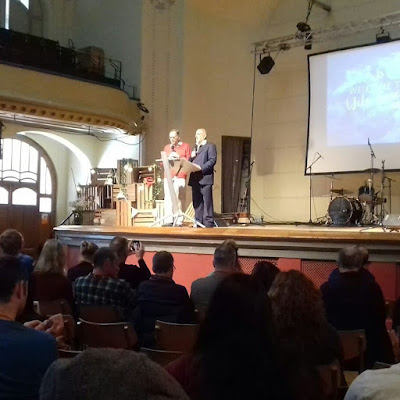 And we were definitely in Switzerland - the first night we were treated to some traditional music and raclette! (which for this amount of people was quite a task, but they did a great job!) 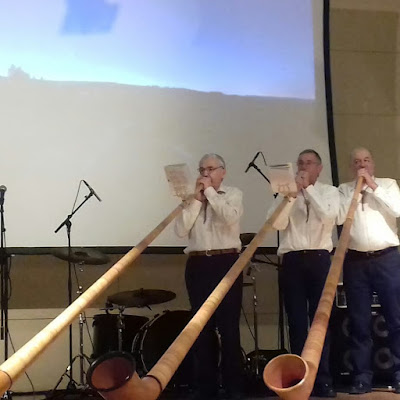 To keep costs down in one of the most expensive cities in the world, they told us we would be in bunkers... I thought WW2 bunkers that had been turned into a hostel or something like that... but no, we were in actual atomic shelter bunkers built in the 70s. This is the view of our room - my purple sheets on the left is where I slept in this room with 25 of my (now) closest friends! It was unexpected, but not as horrible as it seems... and now I have a great story to tell! 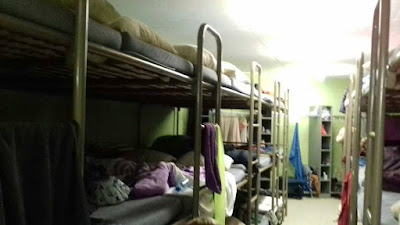 Yip - I slept in an actual Bomb Shelter...apparently Switzerland has shelters for every one of their citizens. Each new building has to have a shelter and in every 10th house built in a village, the government pays for them to have a shelter in the basement for them and their neighbours. 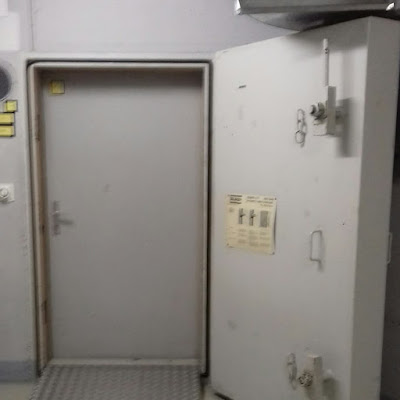 We did get to enjoy some of the sights of the city - mostly on the tram on the way to and from the conference :) But it was still nice to get a feel for the city - and isn't this just beautiful! (thanks Jill for the pic!) 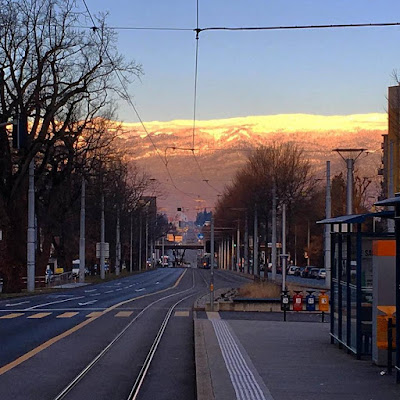 One afternoon I was part of a walking tour of the reformation part of the city with Tom Bloomer who is soon stepping down as the Provost for YWAM's University. It was amazing to hear about the reformation that happened in this city from someone who has been studying it for years! Here he is explaining about Calvin's role in the city's transformation. 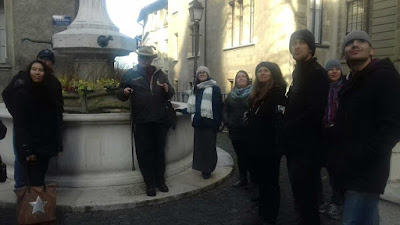 We went to see where Calvin preached: 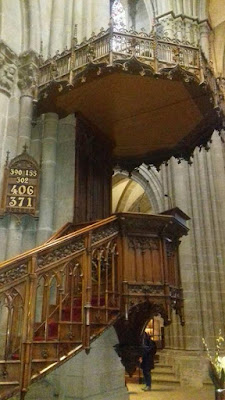 And the chair he used: 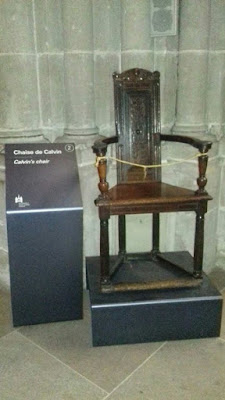 And the church where he did his preaching... 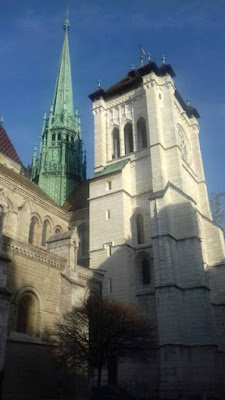 And our tour ended near an amazing place: what was literally the crossroads of Europe - during Roman times, this is where the main North South road met the main East West road, connecting all of Europe in this place! 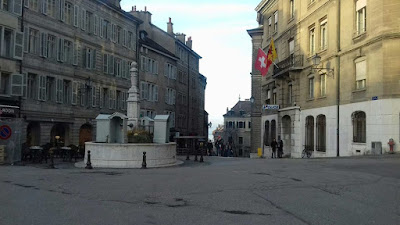 And that is what this conference is for me - there are no pics of all the connections that took place with old friends and new, connecting me to people in Spain and Switzerland who want to send teams to Bosnia, connecting me with people from Czech and Greece so I can see how they are doing, connecting me with people from Ireland who are coming to run a Faith and Conflict conference in Bosnia in April, and most importantly reminding me how important it is to stay connected to God so that I can do all that I am doing!
Posted by beeinbosnia at 8:59 am No comments:

A team from YWAM Rostrevor came for 12 days, and it was great having them. They were from all over: Canada, Syria, Hawaii, Germany and Northern Ireland and we managed to get a lot packed into their short visit! We hit the ground running with our last Christmas package distribution at the Children's Home: Our child/teenage actors finished off well: 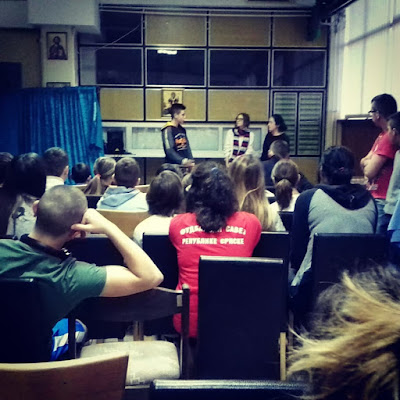 And the team sang a song to complete the program: 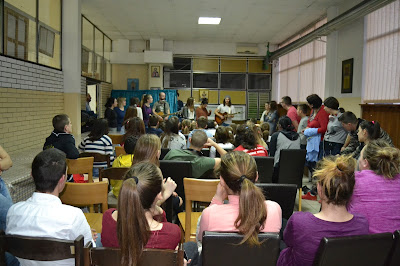 Then it was time to hand out the packages (we can't show the faces of the children for child protection reasons, but you can imagine the joy on them for yourselves :) )

All of the team either sing of play a musical instrument (and usually more than one!) so we decided to do a music workshop with our sponsorship kids: 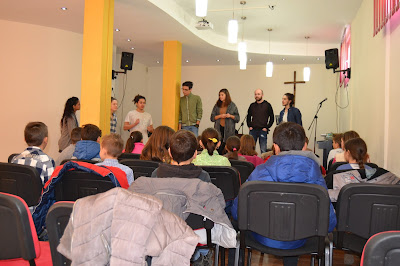 Here they are making a fruit choir: each of the parts is singing a fruit name: Mango or Banana or Kiwi. And the great thing is that they are the same in Bosnian, English and German (where the song came from!) 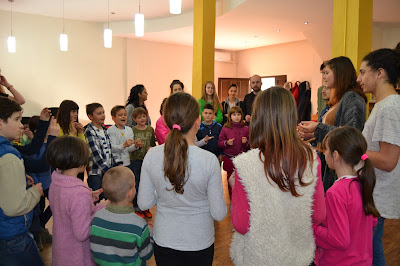 While we were downstairs, Ljilja had a business workshop upstairs with the moms: 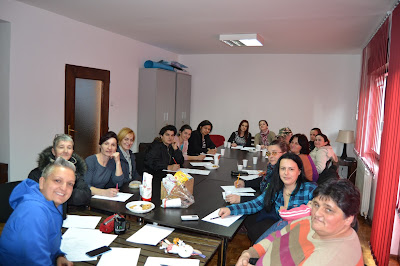 We had one full day of practical work around our building, cleaning up and sorting out stuff... such a great help! And then we prepared for the Christmas party for my volunteers. It was postponed from December as I was not well enough to do it then, and it was so great that they could help out and also hang out with the volunteers: 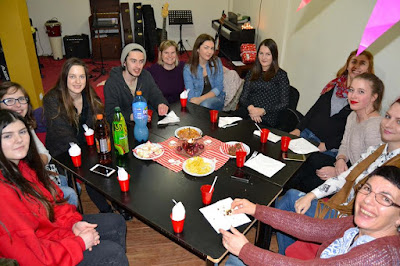 We had prepared a program of more Christmassy songs with the team, but we were also giving the treat of a new local band... They had started practicing together for the first time in our building, so we asked them to come and play a couple of crowd-pleasing songs: 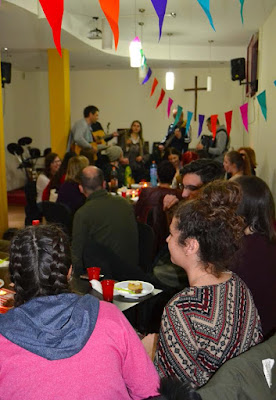 For having just got together, they did a great job! 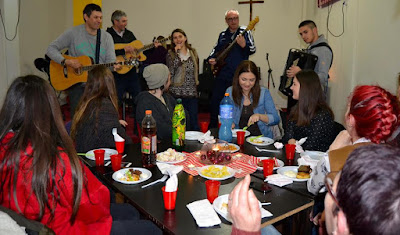 And they got even everyone on their feet and dancing, so I think it was a success! 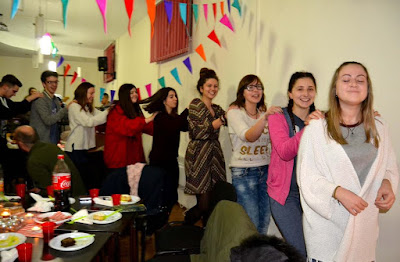 After that, we had more hanging out: 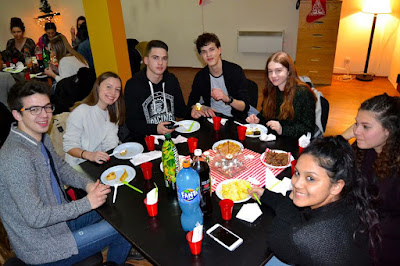 And enjoying the food: 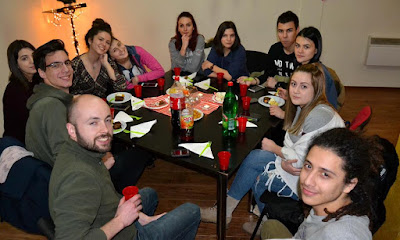 Two of the girls on the team and I spent ALL afternoon baking, but from the expression on these two volunteer's faces I think it was worth it: all unusual cakes for here: brownies, pumpkin pie, cinnamon rolls, and other specialities! 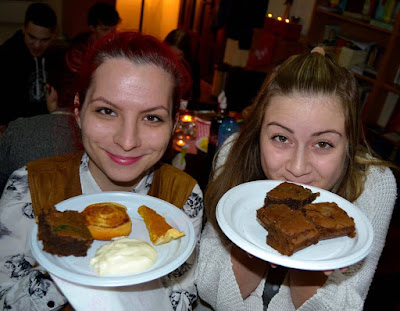 We did end off the program with some more "Holy" music and a good message about Christmas: 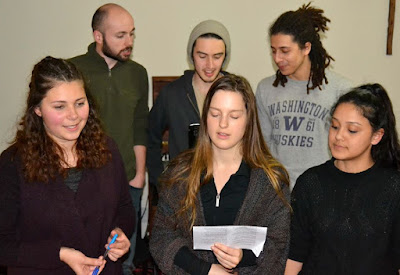 During the week we went again to the Children's Home and the team did a great cultural program for the kids there, including Syrian dancing and a Hawaii shout which went down really well. But then it was time for the 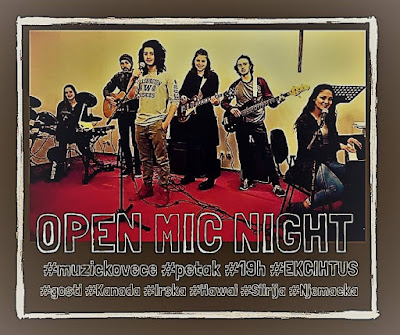 The team sang some songs to get things rolling... 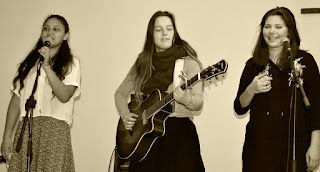 And then the locals joined in... 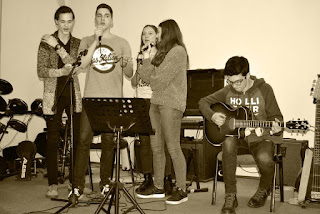 Including sharing the Uzicko Kolo (a traditional circle dance) 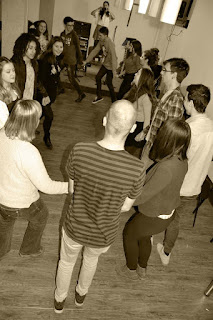 I even got involved in the fun by the end of the night... It was a great evening and everyone enjoyed themselves!! (and thanks to Ljilja for the funky photos!)

Before they left they had fun hanging out not just with the volunteers, but also with our teenage actors from our Christmas plays, and also ran another children's workshop with our sponsorship kids. As I said, we packed in a lot in their short visit!

It was with sad hearts that we said goodbye to them and sent them on their way to Sarajevo...
Posted by beeinbosnia at 7:42 am No comments: