As the school year is coming to a close for the summer, Book Club will be taking a hiatus... until the new school year. We had more 30 children who came regularly this semester and about the same amount of volunteers involved, some more regularly than others.

As the weather gets better, when we go to the library we also take a stop at the local playground. The library is in between two playgrounds, and one of them was recently renovated, so we took a stop there the last time we went to the library. It has some fun features which we tried out for the first time... Like the group swing: 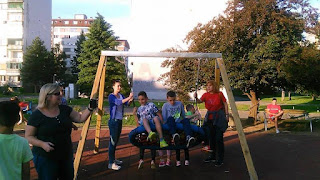 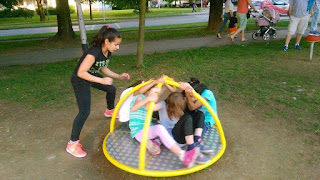 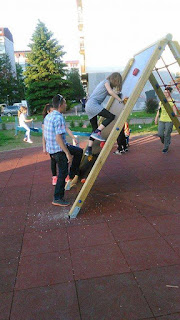 Another fun thing we try to do is take the kids to the Children's Theatre. We took them in two groups - one to see "Ivica i Marica" (Hansel and Gretel) and the other to see "Crvenkapa" (Little Red Riding Hood). The theatre gives us the tickets gratis, and so on our last book club we made them two posters as a "thank-you". We coloured in a scene or two from the play and the best ones went on the poster. We also wrote down which our favourite parts were and put those on there.

The first one says "Ivica and Marica, thank-you!") 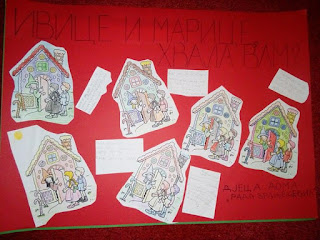 The second one says "Crvenkapa, thank-you!" 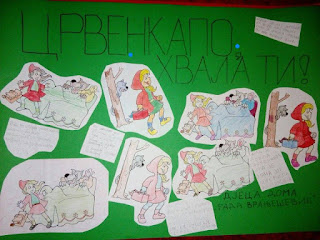 Both of them have "Children from the Children's Home "Rada Vranjesevic" at the bottom right, so they know who the posters came from. The theatre staff were very touched by this gesture!

We also ended off the school year by giving prizes for attendance... The kids LOVE that they get any kinds of presents, and it is a good incentive to stay a part of the club, especially for the older kids...

And so I say, the Book Club is not just about reading (although there is a bit of that), it is also about just having fun! So maybe it should be called the "Fun Club"!! :)
Posted by beeinbosnia at 9:04 am