YWAM in Europe is made up of different areas, and I am one of the leaders for the Central European area. This is made up of 16 different countries from Poland to Greece and Czech to Moldova. It is a real privilege to help lead the 250 people in YWAM in my area.

This week, I went to England to get together with the different area leaders from all over Europe. We had 2 intense days of meeting together and praying for Europe, and it was a real privilege to be a part of this great group of people: 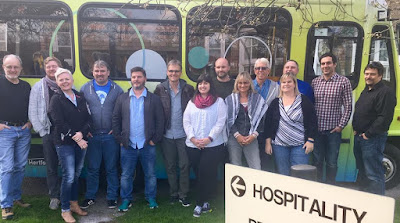 It wasn't all work and no play - we did have time to hang out and get to know each other better, and catch up with what is going on in our lives. We worked out that amongst the 14 of us, we actually came from 13 different countries* - a real YWAM bunch of leaders!

(*and if you count Scotland and England separately, then 14!)
Posted by beeinbosnia at 8:02 am No comments:

It's time for Slovenia

I got back to Bosnia from South Africa, and about a week later went to Ljubljana (about 4 hours drive away) for a mini-gathering of people from all over YWAM Europe. There were 22 adults (and 7 kids) from 12 different nations who came together to see how we could start something in YWAM in this nation. It was 2 days of praying for the nation and the people who are already working there in different organisations and also trying to see what and how we can work there in the future.

As part of my leadership role in YWAM Central Europe, I was part of the team who was organising the event - and it was such a privilege to work together with people from YWAM Grimerud in Norway, YWAM Amsterdam in Holland, and Andreja, the only known Slovenian YWAMer... Here we are: Andreas and Geir Edvin from Norway, Andreja, me, and Reinier from Holland. 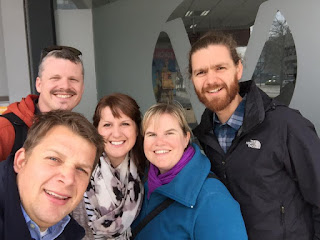 There was a media team from YWAM Amsterdam who came specifically to make videos to promote the idea of YWAM in Slovenia. Here is one of their videos:


I am so glad that I could be a part of this event which included our former European Director, Jeff Fountain "just happening" to be there at the same time to promote his book about Europe's Christian roots, which had been translated into Slovenian. A highlight for me was singing together with everyone in the Ljubljana City Hall (you can see a clip in the video) - the acoustics were amazing, and our worship sounded so good, some of the locals and tourists started videoing us as well!

We clearly saw that it is time for Slovenia!!
Posted by beeinbosnia at 7:22 am No comments: