Wonderful team from the UK!

I met Les and Pam from the UK when I came on a short-term trip to Bosnia and Herzegovina in 1999. They were also here on a short-term trip and we stayed in touch all this time. Pam started bringing teams from the UK to do "pampering" 12 years ago, but they had never been to Banja Luka. When I was in England in February, I stopped off to see her for lunch, and I encouraged her to think about bringing the team to Banja Luka... and in the end they did!

Here are Ljilja and I with the team of 4 - Nicky, Nicola, Wendy and Pam: 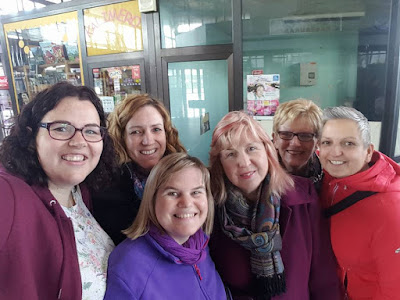 For 3 nights we had "pampering" for mothers of the children in our projects, our friends and our wonderful volunteers. It was hard to explain to everyone what the "pampering" is as when you translate the word in google translate it comes up as "cuddling" :) So here is what "pampering" consists of: Manicures: 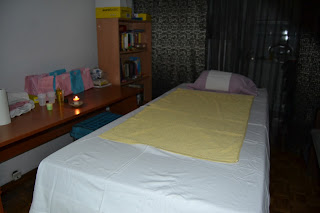 And handicrafts (where we could just hang out and be creative!):

We also had fun with some photo booth items: Here are the ladies from the 3 nights: As you can see we had a good time!! 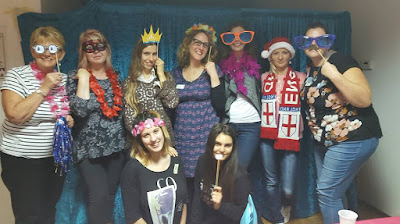 They really treated us so well, we were soooo blessed! So, I showed them a good time in between the pampering - showing them around Banja Luka, including taking them to Cafe Rene (which is based on the TV show "'Allo 'Allo") : 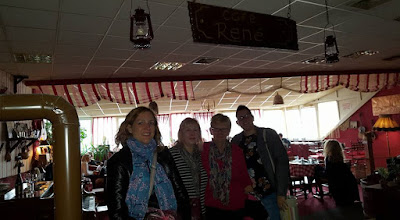 I also took them to the working watermills and waterfalls at Krupa na Vrbas, which they loved! 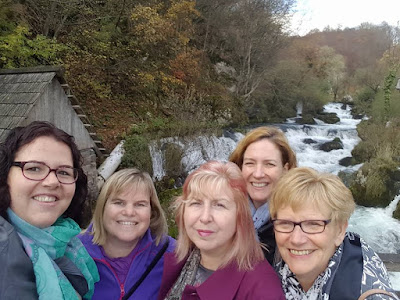 After a great week it was sad to see them go again... but I can comfort myself in the knowledge that they plan to come again in the future!
Posted by beeinbosnia at 6:27 pm 2 comments:

About 70 of us from across Europe gathered in the little country of Armenia for our Europe leadership meetings. I went a day early to help with setup and I am so glad I did as we spent about an hour sight-seeing and got to see the magnificent Mount Ararat: (and then it was cloudy for the rest of the week, so all the other people who came didn't get to see it at all!) 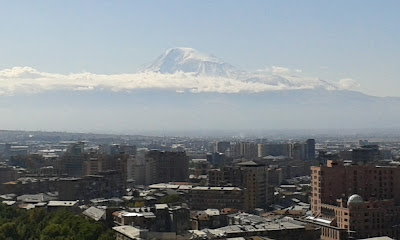 That picture was taken from the top of the "Cascades" which are pretty amazing. There are art galleries inside on every level... 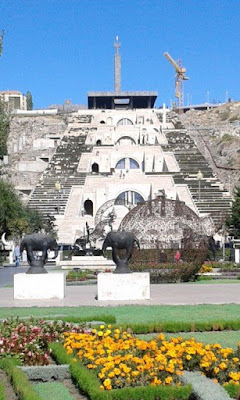 And art installations on the outside on every level: 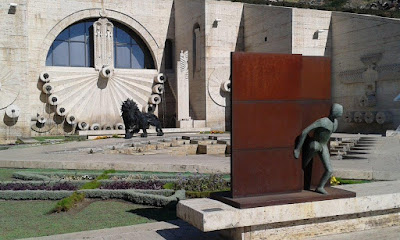 Including this magnificent lion made from recycled tyres: 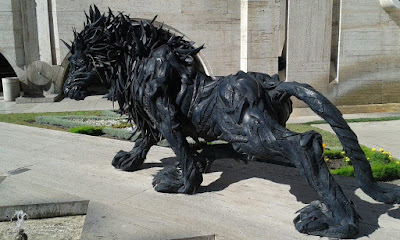 It was a privilege to be able to enjoy some of the sights on that first day as the rest of the week was pretty busy for us all, but especially for those of us in the organising team :)

We met altogether in plenary sessions during the day. Here is Al Akimoff sharing some stories with us - he has been working in the Central/Eastern European region for over 40 years! 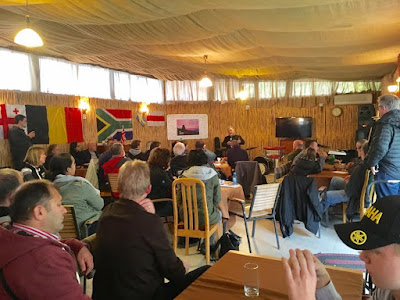 In the afternoons we met in our "regions" (Western, Central, Northern and Eastern), so I was with the guys from the Central European region. There were 8 of us and on the first night after our meeting ended we went out for dinner in a traditional restaurant: 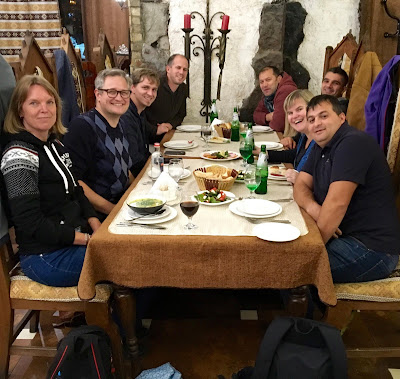 And enjoyed some lovely Armenian music: 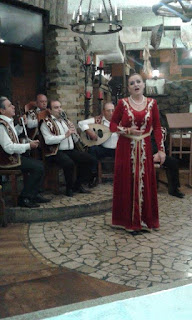 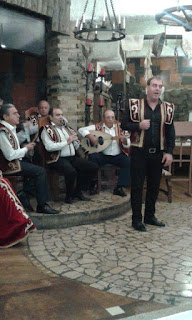 Including this flute player who played two flutes at the same time WITH HIS NOSE :) 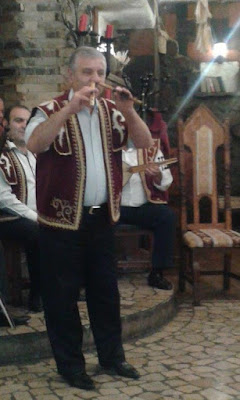 We had some lovely food, which I forgot to take a picture of: I ordered lemonade (and a lot of others followed my lead... to their dismay!) and got some lovely bright green tarragon drink: my one colleague said it tasted like sweet beef stew :) Definitely an acquired taste which I didn't have time to acquire... but the food was really good, so couldn't complain! 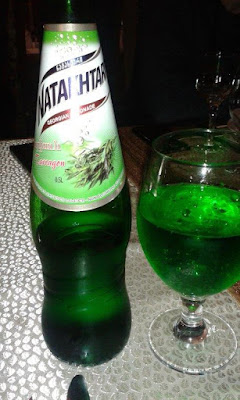 Then it was time to divide the bill... you try and figure out what you had! Luckily we mostly remembered the prices of what we got! Armenian's lettering is unique as it was specially made to be able to translate the Bible. During the Soviet Union they would teach the children "God doesn't exist, but He gave us our alphabet" :) 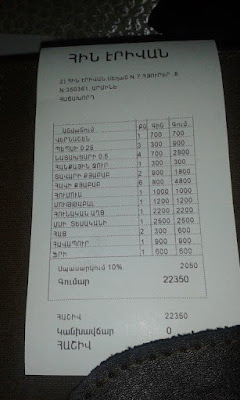 We were in meetings for most of the day all week, but one afternoon we were taken on a wonderful outing to see Mithras' temple: Here is Andrej, one of the leaders in Armenia, sharing with us about the temple. He helped organise the whole conference and it was such fun working with him. 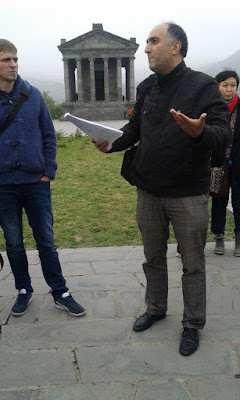 There was time for a picture of all of us at the Temple: 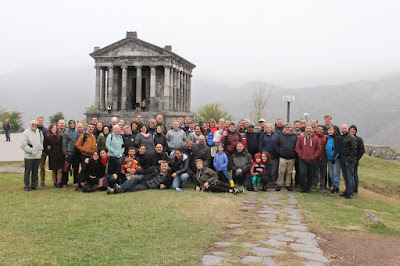 And we also went to a 4th Century Monastery (yes, the 4th century - the Armenian church was founded in 314 and was the first country to have Christianity as its official religion) which was cut out of a cave. The acoustics were amazing, but it didn't make for good photos inside... I did get some photos of the crosses: 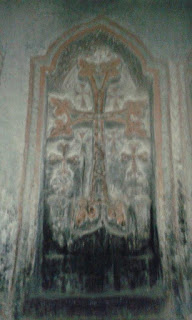 Which get more intricate as time goes on... 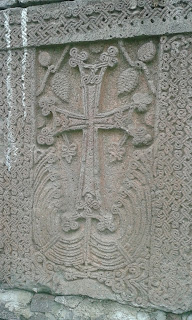 And they are all so beautiful: 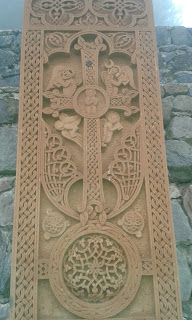 It was a great week of meeting together as a YWAM family from all over Europe as well as finding out more about the history and culture from this part of the world!
Posted by beeinbosnia at 2:58 pm 2 comments: