As he had been conscripted at 18 and was part of the Polish army, my grandfather fled Poland at the beginning of WWII - he travelled through Europe, was captured in France by the Germans, but escaped and eventually made it to England. There he fought in the Battle of Britain with the Polish Battalion. In England he met my grandmother and they had my mom and travelled to South Africa 3 years after the war ended. He wrote letters home to his family, but never received anything back (probably because it was behind the Iron Curtain), so we always thought that none of them had survived.

In October 2014, I received a Facebook message from my second cousin, Izabela, (her grandfather Wacław and mine were brothers) asking if I was Branisław's granddaughter. She had found some of the letters and tracked me down! So, as they kept inviting us to come visit...my mother, aunt and cousin from South Africa, my sister and kids from England, my brother from Canada and I all came together in Poland to meet this side of the family! And as Mom turned 70 this May, to celebrate her birthday altogether!

We didn't know what to expect at all, but it was an amazing time of exploring Poland and getting to know our new-found Polish side of the family. Also, getting back to our roots and seeing where our Grandfather (or Father as the case may be) was from.

We started off in Warsaw for two days, where we explored the old city and went to the fantastic museum about the Warsaw Uprising during WWII. Here am I, my Mom Sue, cousin Pawel (who showed us around with cousin, Izabela), my niece Amy, nephew James, and sister Astrid in Warsaw old town. We were joined later in the week by my brother, Kevin and Aunt Janny and cousin Lauren so there were 8 of us from our branch of the family. 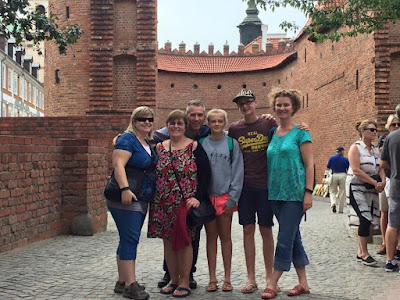 For the two days we were in Warsaw, we were staying in Wołomin, a city just outside Warsaw where one branch of the family lives, and they gave us a wonderful barbecue our first night: And we started to think that we fit in well in this crazy family :) 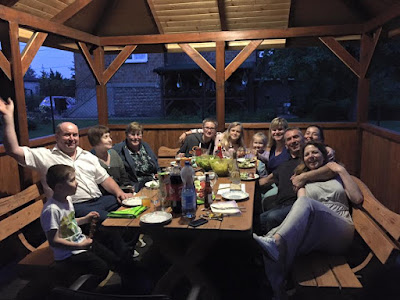 There was also time to look through photographs together. Something we did a LOT of during the week: We got to know each other through all of our photos. One of the dynamics was that not many of the family spoke English very well. Izabela - below left, was the one who contacted me and her English is fantastic - she even teaches children - and Anja, below middle, also spoke well. Aunty Stasha in the middle didn't speak a lick of English, but that didn't stop her from trying to talk to all of us all the time. She was very with it, but just couldn't understand why we couldn't understand her Polish (although some of the time we could figure out some of what she was saying...). Her family did just tell us that she likes to talk and to just nod and smile, so that is what we did... Having her around was part of the charm of becoming part of this family! 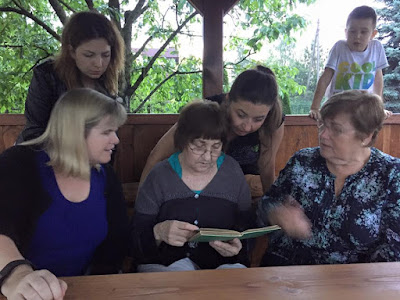 Here are Izabela and cousin Pawel - they are also 2nd cousins to each other as are Astrid, Kevin and I to them. They were the ones who did most of the organising and transport and making sure everything came together. As I have said, Izabela's English is very good, but Pawel's needs help. But he was so determined to communicate with us, with hands and feet and everything in him: and he was unable to hide his love and enthusiasm for life and us... we so enjoyed these two, and this photo sums up how fun they are :) 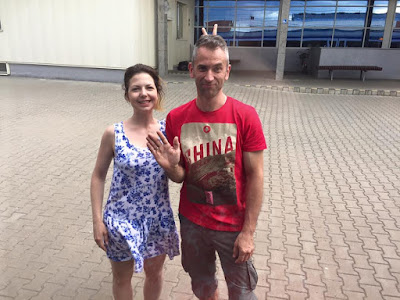 It was then time to drive to Terespol in the East of Poland where the rest of the family was from, and near where my Grandfather grew up in the village of Samowicze. Some of the family from Wołomin came along so it was a big house party for the weekend! We were shown what true hospitality and family is all about: looooooots of food, fun and family: 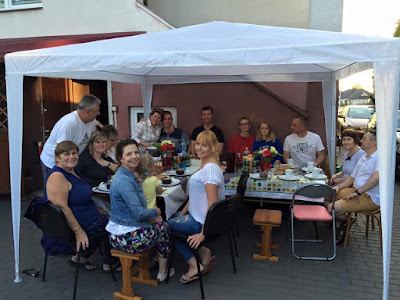 Amy and James with some of the home made biscuits: so yummy! 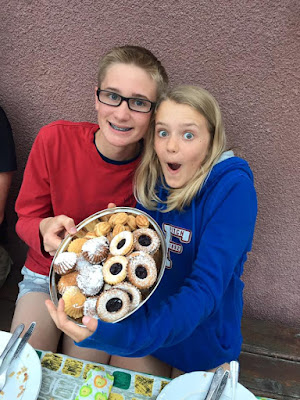 And there was LOTS of wonderful pierogies in all shapes and sizes and fillings :) Besides heaps of other food :) 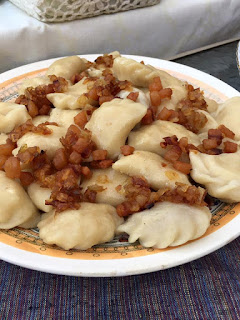 They also made a birthday cake for Mom's 70th (and also for me as it was my birthday while we were there!) 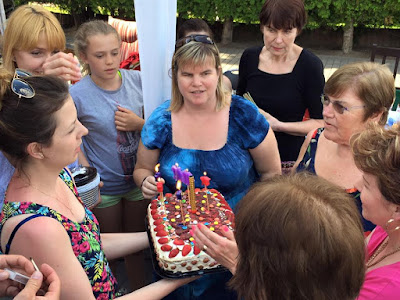 We went to where my grandfather was born and grew up with his 3 brothers. Not much of it is still there as it was wooden - but the cellar survives. Pretty small. Next to my brother on the left is Adam, Izabela (next to him)'s father. He was the one who took us around the village and keeps all the graves clean of all those in his family. It is pretty amazing. It was pretty special to see where my grandfather was from! 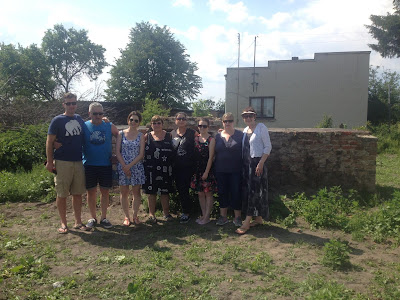 And we also went to visit the graves of my great-grandparents and all of my grandfather's brothers. I kind of felt like I was on the TV show "Who do you think you are" as I discovered my Polish roots... I was taught to say in Polish: I am from South Africa, I live in Bosnia, but my heart is in Poland :) Here is most of the Polish side of the family in front of the great-grandparents' graves, which are kept nice by Uncle Adam. 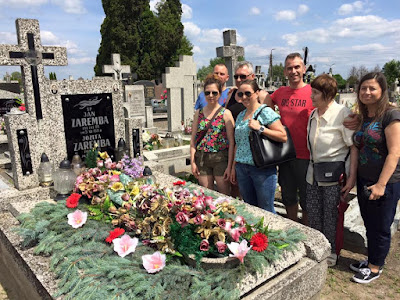 We went to many other places in the area, including to the Polish border with Belarus (which we couldn't cross without a visa). My grandfather worked in the Army in Brest on what is now on the other side of the border so we went to see where he would have walked to work :). This was all before he was forced to flee the advancing German and Russian troops. 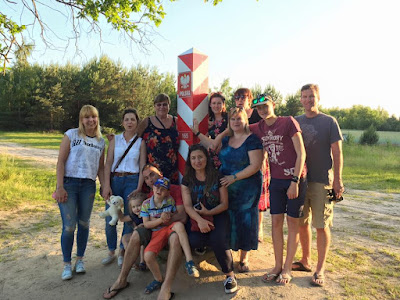 They made each of us a wonderful family tree as a momento: My grandfather Branisław, is the oldest of 4 brothers. He was the only brother old enough to be in the army and that is why he had to leave and the rest stayed. 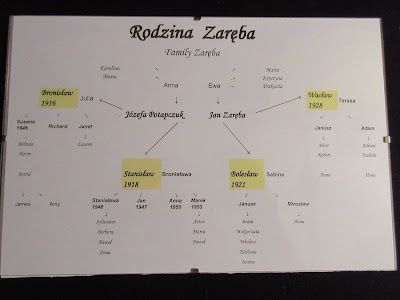 And they printed out and framed a picture for each of us of a photo they had of Papa (which is what we called him) before he left Poland: such a special momento. They also gave us all a lot of other gifts including a book about Poland, and of course, Polish plum vodka! 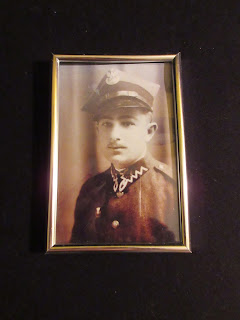 After a wonderful couple of days together, it was time to go back to Warsaw to fly back home, but not before we saw some more beautiful sights - here we are at Łazienki Palace. 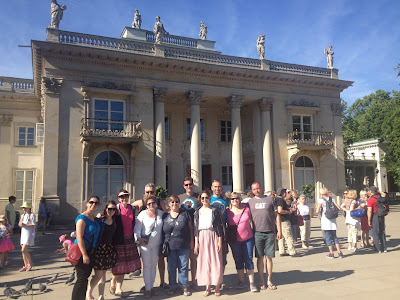 It all passed pretty much in a dream. It is amazing that people who were to all intents and purposes strangers at the beginning of the week have grown into something so much more than family... I am so blessed that we made contact after over 75 years of being apart and am looking forward to more reunions in the future!
Posted by beeinbosnia at 11:50 pm

Bee, love this story. How fun and amazing for your family to rediscover each other!!

It was pretty amazing to live through it all :) We all kept saying it was like a dream!

So moved by this B just so special wow

yes, we were all pretty emotional during the whole week... many tears were shed.