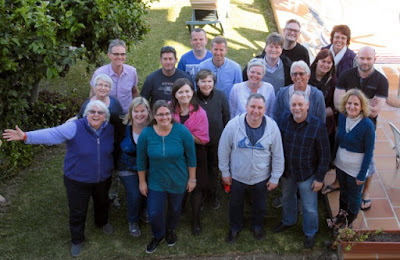 As part of my role in Central Europe leadership, I was privileged to be a part of the YWAM Field Leadership Team meetings held last week in Malaga, Spain. There were 24 people (not all pictured), 9 different nationalities, working in 13 nations and representing all 4 areas of YWAM Europe. It was a great time of fun, fellowship and food, but we also managed to achieve many things which will impact the YWAM Field of Europe. There are over 2500 YWAMers who are spread across Europe, 250 of them in our area of Central Europe, so being involved in helping to shape strategy, and give input in areas affecting this whole field, was amazing!!

Posted by beeinbosnia at 9:19 am No comments:

My colleague, David, hosted a lovely team from the bible school in Czech come and spend a week with us in Banja Luka. Besides working with students, we put them to work in and around our building - cleaning, moving, packing up stuff. We were also really blessed that they were here to help unload more Samaritan's Purse Christmas Packages which arrived - and which we will distribute in time for Orthodox Easter which is on the 1st of May this year.

They also hosted a great Czech cultural night at EKC Ihtus and despite the torrential downpour quite a few people came along to enjoy the fun: You can get a taste for what it was like from the photos :) 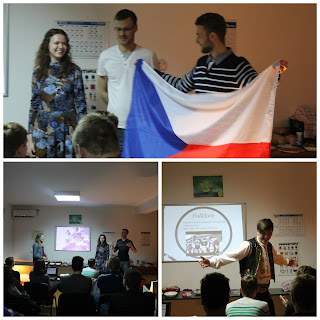 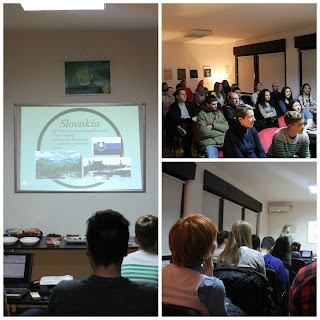 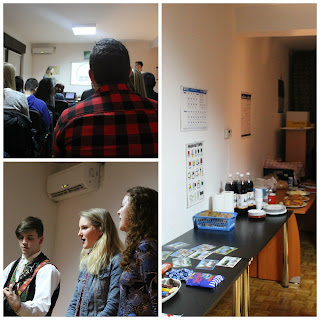 Posted by beeinbosnia at 2:25 pm No comments:

The JOY of the Lord

I found this wonderful colouring page a while ago on thevictoryroad.com and had it for when I would have time to colour... I had heard about the fact that colouring is now becoming the thing to do as adults, and so I thought I would see what it is all about.

I know that the children I work with love to colour, especially those at the Children's Home, and I know that it calms them, so I could see the benefit for them... And in this crazy life, I know that there are times I long for the calming, stilling, "just being"-ness that something like colouring would bring.

And yet, I still didn't try it. I didn't find the time. Until time found me... After a crazy trip to three countries and a lot of conference and meetings, I found myself unwell. It was inevitable as in my last destination I was in meetings all day with someone with a cold... oh well.  After 5 days of being good and resting, (even cancelling a trip I was supposed to take) and thinking I was better, I managed to get up and carry on with my normal craziness - and after 2 days of that, I was hit by a second wave of illness worse than the first... After a trip to the doctor and a diagnosis of sinusitis and bronchitis and a prescription of antibiotics and "REST" (she even put it in capital letters so I really would get the idea...), I decided to actually do some resting... 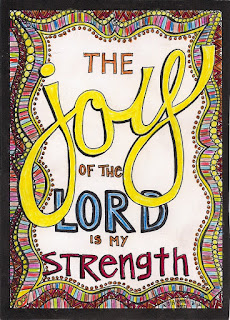 And so, during the time of rest, I finally found time to do some colouring... and of course I found that I enjoyed it! I love the meditative nature of choosing the colours, focusing on the words while colouring and repeating over and over to myself - the JOY of the LORD is my STRENGTH. In this time when I am without strength, it is good to be reminded!!

I am not really an artist, but I can find JOY in bringing a blank colouring page to life!

It was also good to know that the world doesn't collapse without me in it. Things carry on without me (I have a good band of people around me to fill in!) and so I can take time to rest and get my strength back up before moving on to the next thing that God has for me...

We had our first Book Club of 2016 last night. I have gone a couple of times to visit the kids at the Children's Home in the meantime, and had a meeting with our volunteers (where we talk details and then I also got them to sharpen all the pencil crayons so I didn't have to do it all by myself!), but we waited until now to have our first actual Book Club.

Here it is customary to give cards and flowers to women for Women's Day (which is on Tuesday, March 8th) so we made cards for their teachers, carers and mothers (unfortunately the reality is that a lot of the kids have moms who can't/won't take care of them). As usual it was organised chaos, but I think everyone had a really good time: 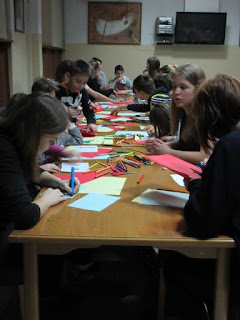 After I took this picture more kids arrived, so this table also filled up... we ended up with over 30 kids and there were about 15 volunteers. I didn't get to take many pictures as I was doing crowd control :) 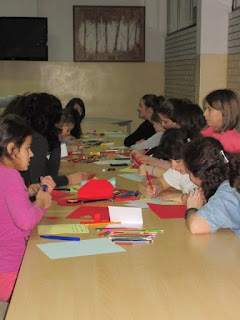 And who says that making crafts is just for girls? Some of the boys really got into it... Here is M with his creation for his carer. 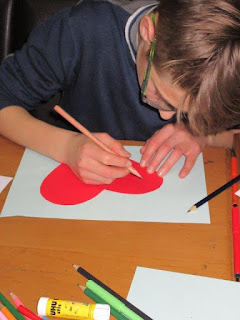 And his little brother D with a car - don't ask! (also for his carer) 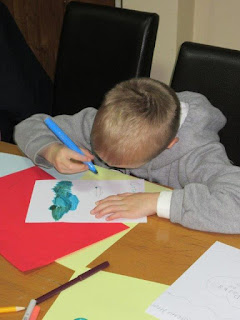 Now, when I arrived I got three notes - the paper all pulled out from the same notebook and all saying "I love you Aunty Belinda" and "Happy Women's Day". It always warms my heart to get something like this, but this time I was especially touched, because one of the notes was from a new child whom I only met last night... She had only heard about me from her friends and yet she wanted to give me something... Must be doing something right when they love me just by reputation :)
Posted by beeinbosnia at 10:13 am No comments:

I needed to go to Italy for a conference, and to Budapest for meetings... and I discovered that it would work out cheaper to go via the UK to Italy and then onto Budapest, and it happened to be the half term holiday that week, so I combined the trip to see my sister's family and some other friends in the UK. I don't have pics of everyone or everything, but hopefully the ones I do have will help you enjoy the trip along with me...

I started in Oxford... and had a great time with my sister, brother-in-law and their two kids... that is despite the fact that my wallet was stolen the first day (from my bag while I was in a charity shop)... The most annoying part is not the money or cards, which are easily replaced, but the South African driver's license - which is not as easy to get a new one from overseas... but luckily my mom found out that she could apply on my behalf as long as I got a bunch of stuff together, which I managed to do while in the UK.

Besides hanging out with family (and helping them get a hamster!). I got to do some wondering around the dreaming spires of the city. Here is Amy on the Bodleian library steps: 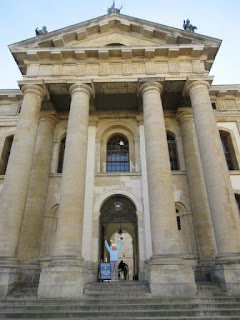 We also wondered through the University Gardens on the way to and from the city... and got the only photo of us together on one of the cute bridges: 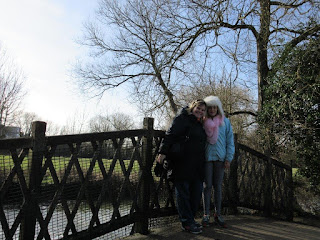 And Amy got this super shot of one of the first snow-bells :) spring is in the air! 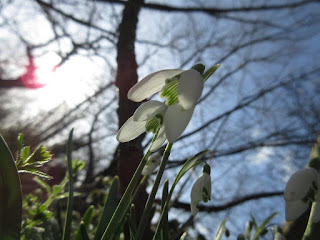 I then travelled to Stoke-on-Trent to visit my friends Trevor and Carol and their kids, my godson Christopher and Anna. We had a great time hanging out (and running around getting things done to send to my mom to apply for a new driver's license!). 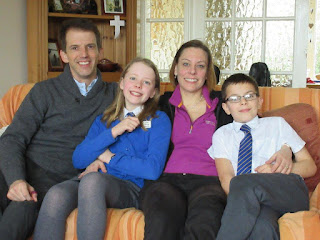 Then it was time to fly to Milan for the YWAM Western (and Central) European Leadership Gathering. We were mostly in meetings all day, but we had one afternoon where we got to see more of the city... 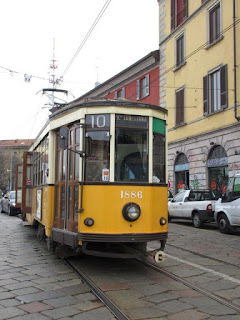 The square where Constantine declared that Christianity was the official religion of the Roman Empire: 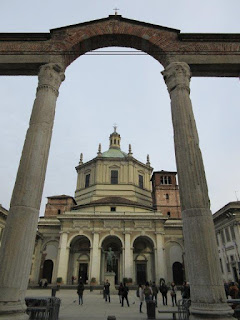 We had some lovely gelato at the Duomo Cathedral square and I decided to go for the arty pic: 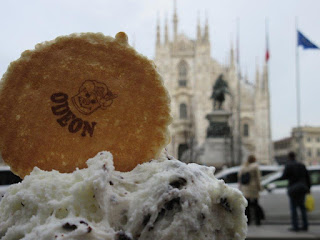 Galleria Vittorio Emanuele with some cool guys: Rune from Norway working in Romania, Jarod from Canada working in Croatia and Luke from the US working in Czech... 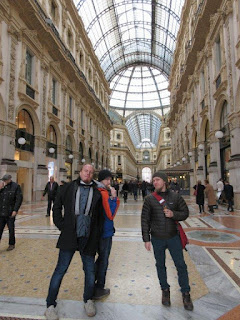 Sunset over the canals... so lovely :) 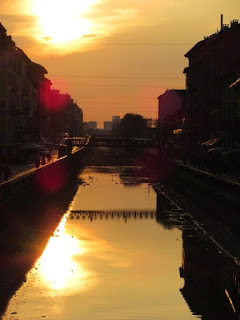 And yes, there was conference: Here is the main speaker Neil Cole: I didn't get any other pics, but there were other speakers, break-out groups and lots of meetings over dinner, breakfast and lunch! We started at 7am for breakfast, and got back to the hostel at 10pm each night, so long days, but lots of good connections and great input makes it all worthwhile. 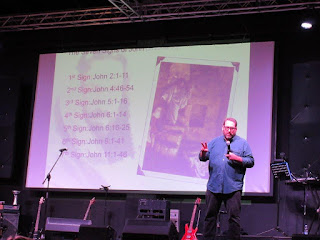 After Milan it was time for Budapest. We had two full days of meetings, but I did get to hang out with my Swiss friend, Heidi, on the weekend and we even got to have fondue!! 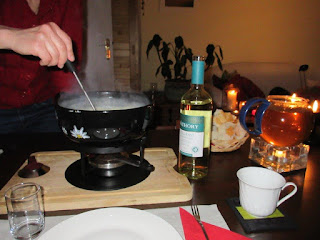 And of course I didn't get any other pics in Budapest either :(

After almost 3 weeks on the road, it is really nice to be home again!!
(oh and my mom got the stuff for my driver's license and already handed it all in - and so now it is just 4-6 weeks and then getting it here before I will be able to drive again... note to self: next time don't carry it in the wallet!)
Posted by beeinbosnia at 8:29 pm 2 comments: