Rules for my life

When I was at University, I had a friend who had the following rules: 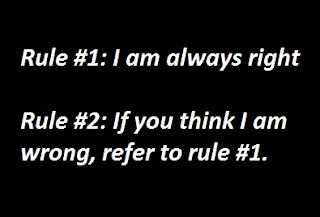 Since then I have always used this as a joke...saying that this is the list of rules for my life. Although I am right in many cases (ha ha!), I know that I am not always right... but sometimes I do act as if I am always right: which is not good for those around me. Yesterday Ljilja joked "my life became so much easier when I just remember that Belinda is always right" and it got me to thinking...

I mean, if the person I live with and work with has to act like I am always right just for us to get along, then something isn't right!!

This morning during my daily time of reading my bible and praying, I realised a couple of things...
1) of course I don't really think that I am not always right, but even saying it as a joke means that others may think that I actually do think that...
2) the only one who is ALWAYS right is the Lord. WOW! That was a BIG one. Of course I know that God is good, and loving and LORD ALMIGHTY, but to put it into that context is so cool. He doesn't make mistakes. He knows what is best. He is in control. He is GOD and I am NOT! I don't have to always be right, but it is comforting to know that someone is...

So, my list of rules for my life are now: 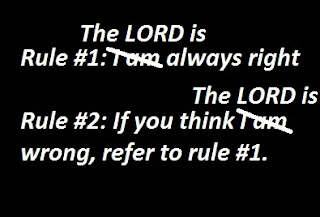 Posted by beeinbosnia at 6:04 pm 2 comments: 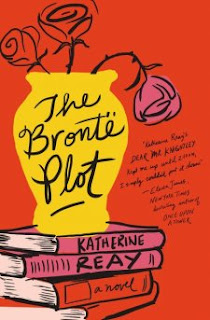 Before I went on vacation to Canada, I decided to get a book to read while I was travelling and chose this one from the ones available. Set at first in Chicago, but quickly moving to London and classic places like Haworth where the Brontë's lived and wrote and also the Lake district, this story was a great one to read while travelling myself!

The settings are beautifully described, and the characters are well developed, and the story-line keeps you wanting more - my kind of book!  The main character, rare-book dealer Lucy, has made mistakes in the past, and these catch up with her and ruin her relationship with her Prince Charming, James. She realises that things have to change and in comes James' gran who whisks her along to England on a buying trip, but she also has other motives which surprisingly have nothing to do with James...

As the story unfolded, I was drawn along by wanting to know what was going to happen, and really enjoyed seeing the changes the main characters made in their lives.

I would recommended this story especially to those who enjoy classics from the Brontë's to Austen, and want a good solid read that makes you think about your life and how you can also improve.

Disclosure of Material Connection: I received this book free from the publisher through the BookLook Bloggers <http://booklookbloggers.com> book review bloggers program. I was not required to write a positive review. The opinions I have expressed are my own.
Posted by beeinbosnia at 5:45 pm No comments:

Canada and US Trip

It has been six years since I visited my brother and his family in Canada and as I hadn't seen his youngest, Hope, since she was a baby and she is almost 4, I decided it was time to come over to this side of the world...and then I found some really reasonable tickets to actually come for Christmas, so I grabbed the chance!! It did mean that things got pretty hectic before I left Bosnia as we finished up the Christmas package distribution and the craziness included a trip to the ER with Ljilja as she developed an allergy to new medication - fun times! (She is all good now, thankfully...)

It has been a fun, hectic, fun, full time and now I am baby-sitting to give my brother and his wife a nice date night, and decided it was time to put something on the blog...

I arrived just in time to slightly get over jetlag so I could enjoy the day-long Christmas festivities... the most important of which (for the children) were of course the present opening:
The pics are of Andrew, Luke and Hope all opening their presents from me, which included some age-appropriate Bible for each of them: 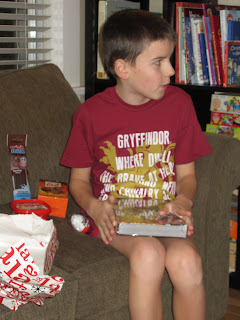 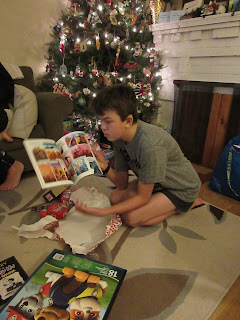 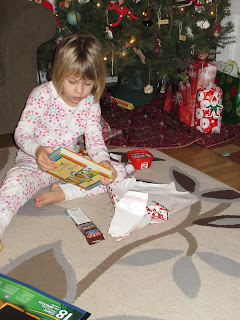 Christmas fun continued at Robin's parents place where we had brunch and then opened more presents and then hung out until Christmas dinner... and it was a fun bunch of people to hang out with as you can see: 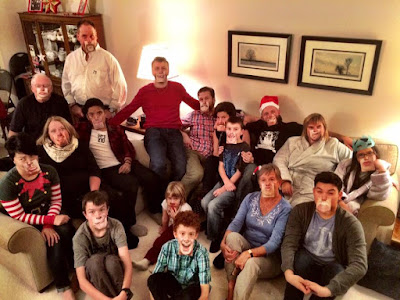 I am in a gown as it was one of my presents and Mia (next to me) came wearing hers, so we were wearing our gowns as a "thing" and I was not cold as my poor mother thought when she saw this photo!

Christmas continued into the next week when we went to "Bright Lights" and the Christmas train at Stanley Park - it was very fun! 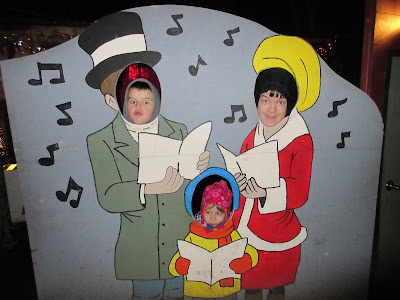 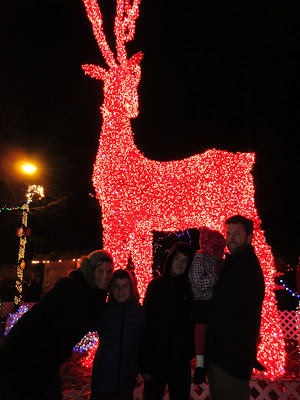 And Trinity Street where my brother lives is well known for their Christmas lights, so we had a stroll one evening to have a look...and these pics are just a sample: 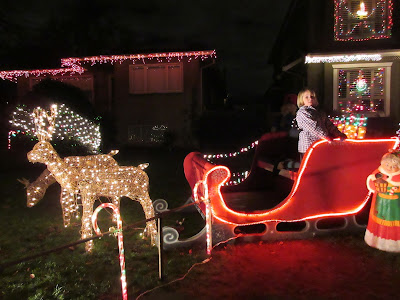 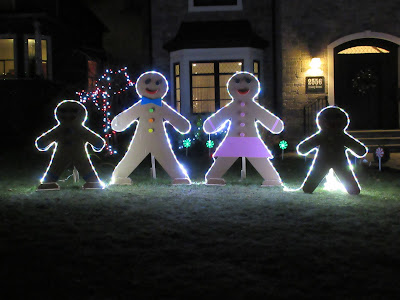 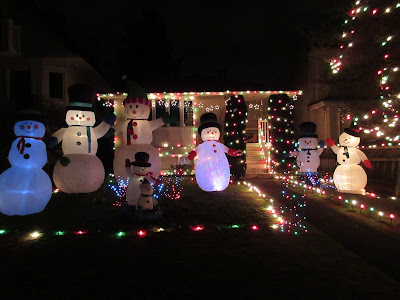 I did go downtown one afternoon to meet up with a friend for coffee and see some of the sights: Canada Place: 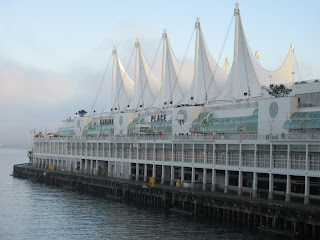 And an arty pic of the Olympic cauldron: 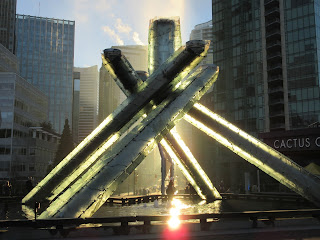 We did do some things not connected to Christmas... ice-skating (well for Andrew and Hope - I played card game with Luke and we were both much happier doing that...) 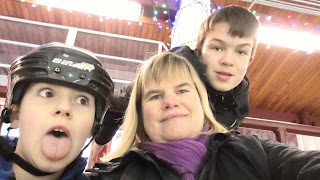 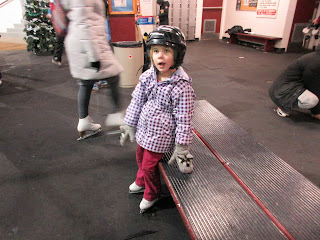 An outing to the seawall at the Olympic village - but the only pic I have is Andrew (9) entertaining Hope (3) with his magic tricks with a quarter she found... so cute! 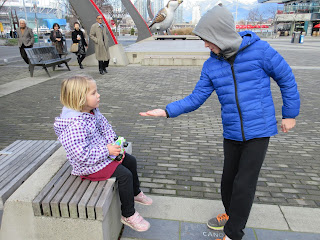 And today we went to Granville Island, which is a really fun place for adults and kids alike... I tried to get a group shot, but Hope didn't like looking into the sun... 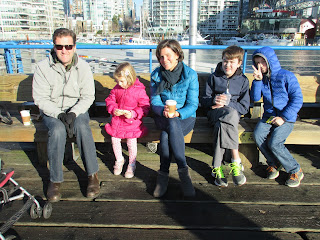 But she was happy to pose for me when she didn't have to look into the sun - what a cutie! 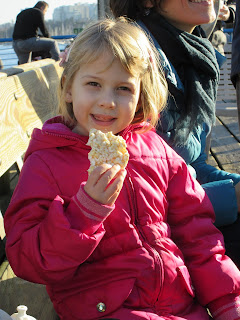 While I was already in Vancouver, it seemed like a good idea to visit a church which has sent a team to us and is based in Seattle. When my sister-in-law's parents heard about the idea, they offered to drive me down and a plan was formed... so we headed to Seattle this past week and we had a great time!

We spent one day doing the scenic route (and via some shopping!) but I didn't get any pictures as it is the Pacific North West and so it RAINED the whole way... but it was still pretty!

In the evening, I shared with a group of people from the church about what we do in Banja Luka: 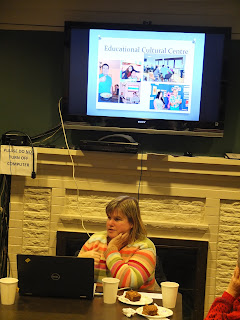 Some people had already left, but here are most of the people who form part of the Balkan Task Force at University Presbyterian Church in Seattle. They were a very attentive group with lots of good questions! 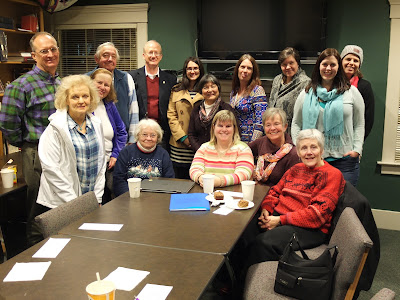 The next day I spent sightseeing in Seattle with Bevin and Barb and Seattle pulled out its best weather, so I forgave the rain of the previous day... it was STUNNING!

We started at the Pike Street Market: 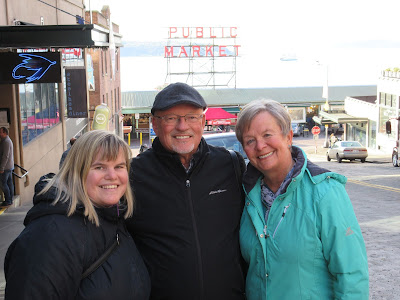 Where the first Starbucks was started: 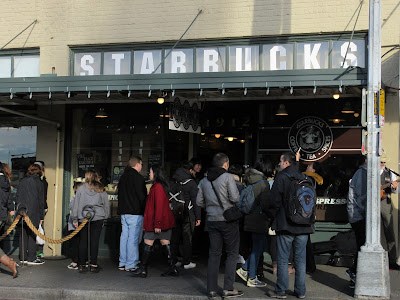 We then took the monorail to the space needle: (and sat in front, so I could get cool pics like this one!): 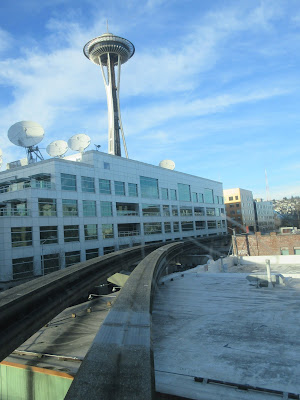 As I said, it was completely stunning weather... view to downtown (and a bonus float plane!) 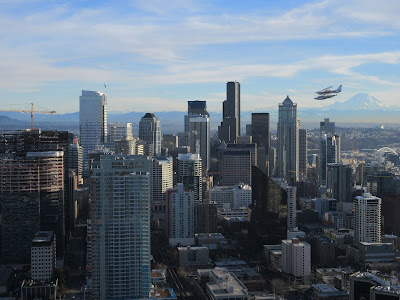 And a shot of Mt Ranier... so pretty! 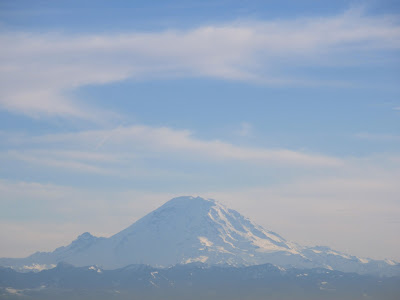 We also got our pic take up top just to prove we had been up there: 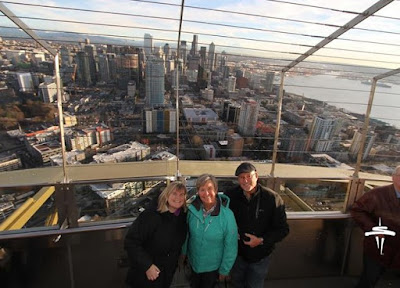 As you can see I have had a great time in Canada and the US... just a couple days more and it is back to Bosnia and I guess back to reality!!
Posted by beeinbosnia at 6:05 am No comments: