Book Review | The Bones will speak 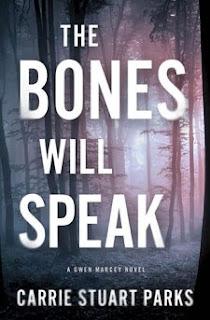 When forensic artist Gwen Marcey is presented with a human skull by her dog who then leads her to shallow grave, and more bodies, she uses her artistic skills to reconstruct the face of the victims. She realises with shock that the face of all of the victims resemble that of her 14-year-old daughter and that they are being targeted by a serial killer.

The story starts strong and carries on going through twists and turns and unexpected blind alleys which all keep you guessing until the end of the book...

I really enjoyed the book which was intriguing from beginning to end and was an easy enough read with some interesting details to keep me entertained.

I didn't realise that this was a part of a series until reading other reviews after reading it. It can be a stand alone book, and I do look forward to reading other books in the series.

Disclosure of Material Connection: I received this book free from the publisher through the BookLook Bloggers <http://booklookbloggers.com> book review bloggers program. I was not required to write a positive review. The opinions I have expressed are my own.

Not just another Sunday...

After having one group of actors doing Saturday's Christmas plays and Shoebox packages, it was the turn of our other group on Sunday (we decided this year to have two groups, so if someone got sick we would have a back-up: last year our main actor had a temperature of 39,5 and still performed!). It has been interesting with so many children, especially finding times we could practice. I also worked out that I have heard the play at least 25 times with two groups practicing each time at least twice... I think I can almost repeat it word for word!

Ljilja started off the program: 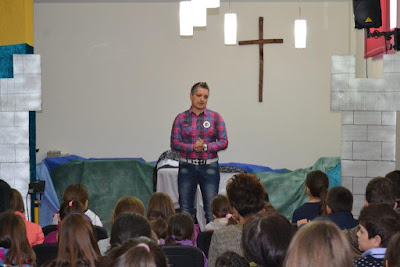 And then it was time for our play: They did a really good job, and I am so proud of all of them! Especially Tanja, our narrator behind the scenes... 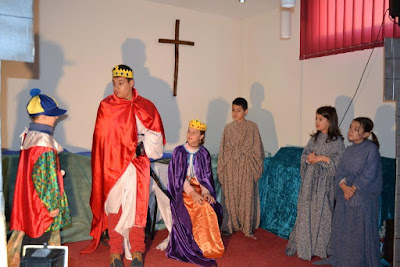 A song (with Christmassy hats!). 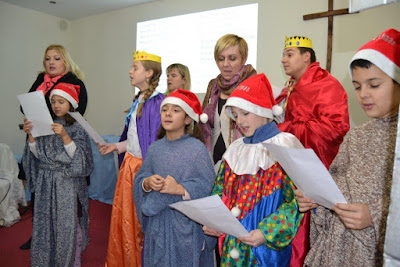 We again had a film about where the packages came from, and then it was Sinisa's turn to talk about how the greatest gift at Christmas is the little baby in the manger: 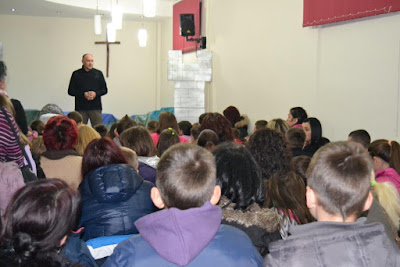 Then again Dragana invited the kids to come along on "The Greatest Journey" - a 12 week look at the Bible which is really fun for kids... we plan to do it in the new year. 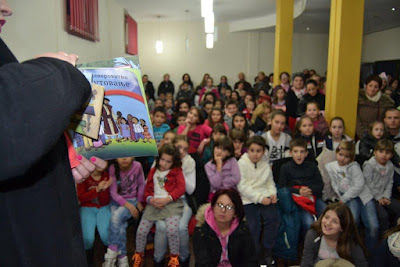 We also had a guest, Aleksander from Samaritan's Purse, to see how we did the distribution - here I am (in my snazzy Operation Christmas Child shirt!) translating for him: 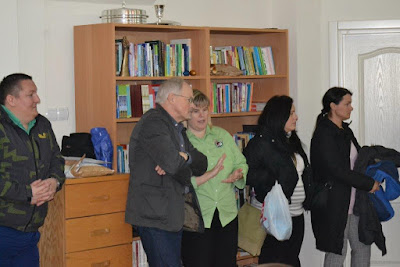 Then it was time for the main attraction!! Group one with all their presents... This is children of our friends, children of volunteers, sponsored children - a real mix: 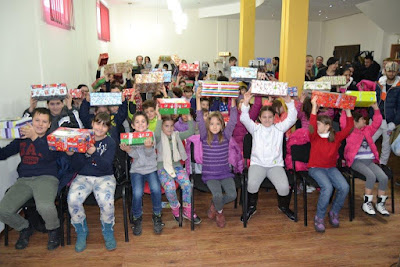 And then it was time to do it all over again... Unfortunately , we didn't get a picture of all of the kids with their presents in group 2 (from the single parents group) as they didn't realise we wanted them to stay for a picture and just left with their presents, but you can see them below with our wonderful actors! 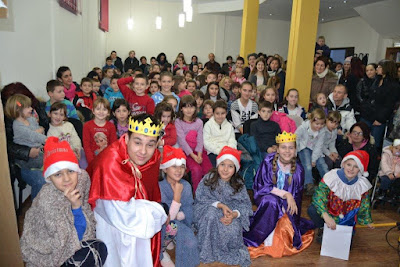 It was a really fun day - and we had lots of reports about how cool the presents are once they got home! This week we will do a couple more performances and then that is it for our Christmas play for this year...
Posted by beeinbosnia at 12:25 pm 2 comments:

We are in the throws of Samaritan's Purse shoebox package distribution - the packages arrived on Wednesday from the UK, just in time!! We have two groups of kids who are doing the play for us. We had our preview of our drama at the Children's home and on Saturday it was time to have the it at our place, with a Castle and everything! 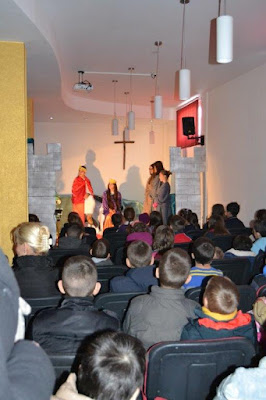 It was the same group as on Thursday at the children's home. Sunday is the turn of the other group... They did really, really well. I was very proud of them! 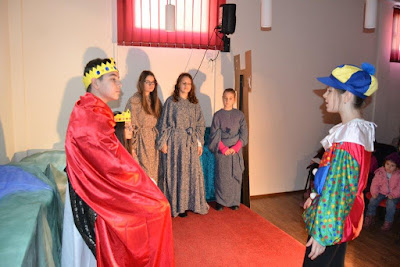 Here you can see our clever trick which I have to tell you about otherwise you wouldn't... Below the Jester is explaining about how the baby in the Christmas card is actually the biggest present for Christmas and all about what He has done for us. It was a LOT of text to learn, so we put it on the back of the Christmas card so they have a reminder (they mostly know it!) and can say it all without leaving anything out... She just looks like she is holding it up for the audience to see :) 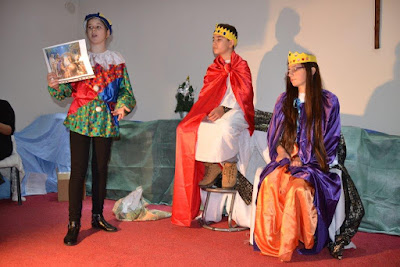 After the play we sang (along with the crowd!). This song is all about how we are precious: 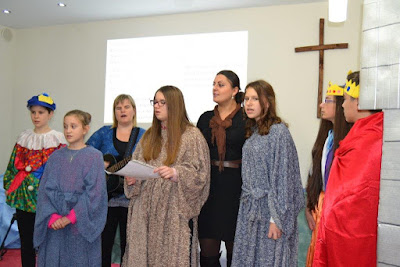 Then it was time for us to watch a couple of videos from Samaritan's Purse showing how the packages are packed by individuals and sent to us and all over the world. Dragana is explaining the films: 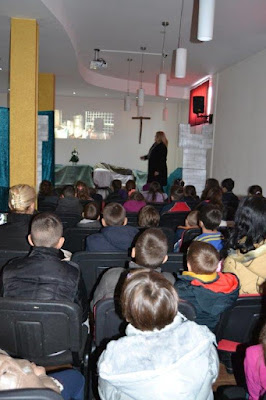 Then we explained a bit more about the most precious gift of all: the one who came to earth as a baby who is actually the King of all! But after that the best part - shoebox packages! 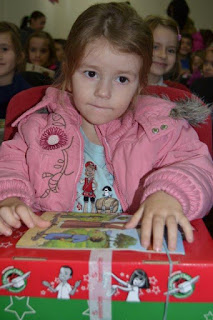 I don't think they knew what was going on, but they are super sweet :) And the packages are almost bigger than they are! 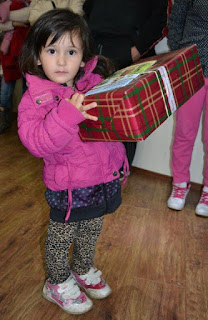 This little guy understands!!Love that smile! 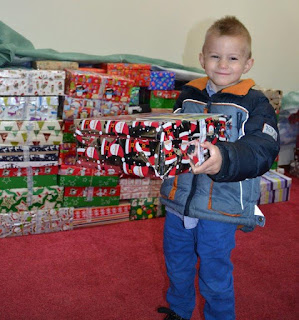 This was the first group: new kids in our sponsorship project: And then we did it all again in the afternoon for the second group: older kids in our sponsorship project (and our actors got along with this group as well!) 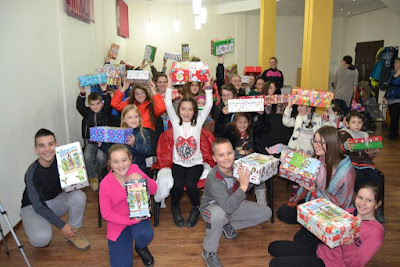 I think even though it was a long day, it was definitely worth it to bring sooooo much joy to soooo many kids... And the fun continues... sometimes I really love my job!
Posted by beeinbosnia at 8:30 am 3 comments:

Christmas play for last Book Club of the year


For the past 4 weeks we have been practicing our Christmas play, and this time with two groups of children (yes, I am mad!). We are having more distributions this year, so we decided that it was better to have two groups as it would be too much for one group. It also means that if someone is sick we have a back-up! The children in the play are either one of our sponsorship children or children of our friends, and we have fun! My friend Dijana was once again helping with the text and narrating (she helped last year as well). Tanja helped a LOT with the costumes other logistics. Also, many of the costumes were made by my Finnish colleagues for the Nativity play two years ago and we just adapted them all... I love the legacy - they have been gone 18 months, but we still have many things we use that they left behind, this is just one of them!

On Thursday we had our preview performance (with one group) at the Children's Home as part of our last Book Club of the year. We had all of our Book Club members as well as some extra kids :) 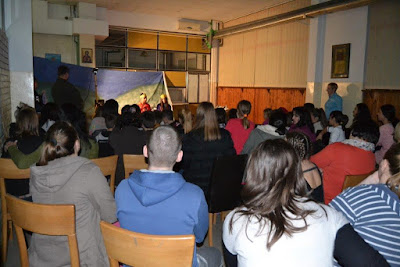 The story this year is set in Kingdom far away where there is a king and a princess and a court jester. The court jester, however, is no longer funny, so they send him to another kingdom to learn new jokes... 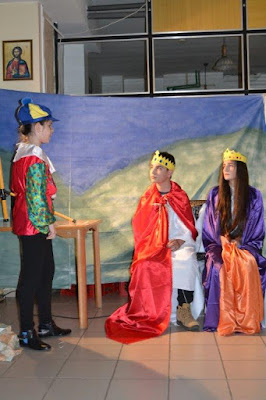 While he is away the people in the kingdom complain about how boring it is, and how they can hardly wait until he gets back... (as this is the children's home, I can't show their faces online - so that is why the audience is a little blocked out...but at least you get the idea) 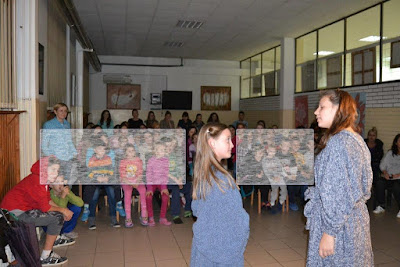 When the jester returns, he has new jokes, but they are about a strange thing called "Christmas". In this Kingdom they had never heard about Christmas... So, "he" (it is actually a she as the part is played by Ana) explains to them all about celebrating Christmas. Here he is showing them a Christmas card and telling them all about how baby in the picture is actually a King who is the best present we can ever receive... 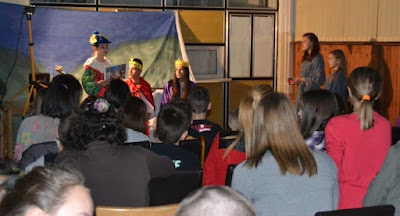 It was really fun doing the drama with this group - and they did a really good job! Here we all are, including Dijana. (and I am not sure why I am not smiling, I was happy it went well!). 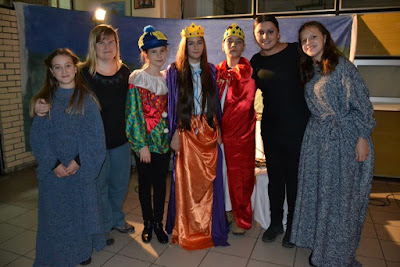 The kids at the Home really enjoyed it, and I love the fact that I can mix two parts of my ministry here in this way!!
Posted by beeinbosnia at 8:42 pm 2 comments: