Trip around the World with Sina

Sina, our Finnish friend and colleague has been staying with us off and on for over a month now, and it has been great having her. She has also travelled to over 70 countries in her lifetime, so we decided to have her give us a "trip around the world" through her experiences: Here she is (with Ljilja translating):  (somehow all the pics of the crowd came out fuzzy: I was trying to take them in between moving the slides along, and clearly multitasking isn't my strong point...) 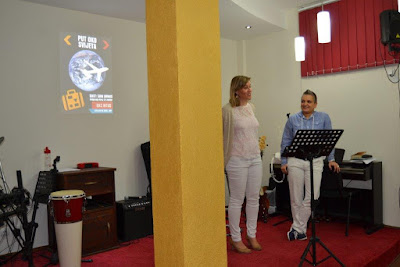 She shared stories from some of the many countries she has been to. It really was a very interesting presentation, with lots of interesting facts and interaction. Here are Ljilja and Sina posing with one of the pictures she showed us. It is from India of Sina while she was in her role of Sponsorship Child Coordinator with Fida International:  (she is now the coordinator for Child Sponsorship in the Balkans - which is why she is based now in Kosovo and spent a month here) 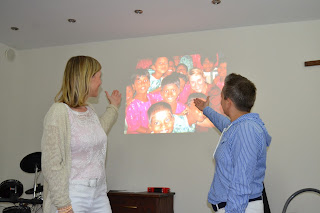 After the presentation we had a challenging quiz which was done in groups: (and Ljilja took these photos... no fuzziness!) 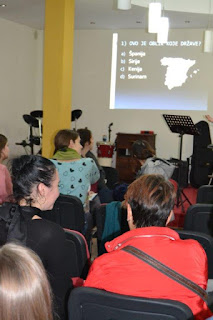 As you can see, it was also really fun: 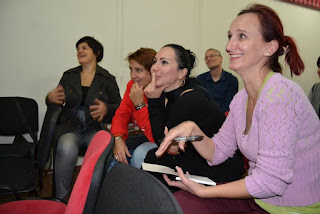 And after the prizes were handed out, we enjoyed food from all over the world: From South Africa some Kudu and Ostrich biltong, wasabi nuts from Japan, salmiakki from Finland, Swiss chocolate, Kosovar pralines, and some delicious Spanish sweet delicacy which probably went done the best (after the Swiss chocolate of course...) 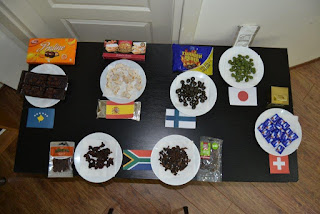 Most people did try everything, but some (cleverer ones) stayed clear of the wasabi and salmiakki as the strange taste is not to their liking! But we did have something for everyone - and you can see that people were enjoying the different delicacies... 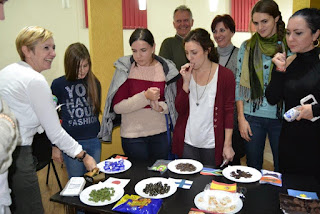 It was a great evening, and those that came had a great time! Well done Sina!
Posted by beeinbosnia at 12:04 pm No comments:

I didn't get any pics of Mom at our Book Clubs which she came along to very diligently with me. We have one in English (where we are reading through a shortened version of "The Hiding Place" by Corrie ten Boom) and of course the one at the Children's Home. However, to make up for it, I have some pics of our "visiting people" activities:

Visiting Tanja (and her daughter Ana about to go to afternoon shift in school): 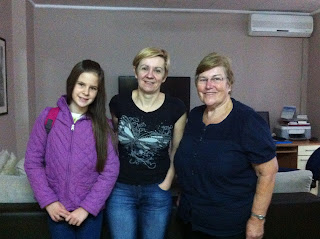 Visiting Dragana and her crazy wonderful family: her Mom and Dad and nephew Sergej all gave us lots of laughs :) 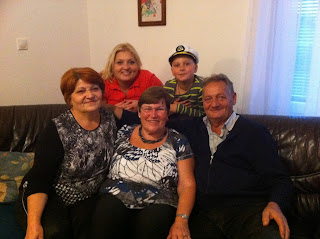 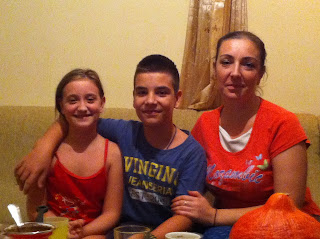 Here is a pic with Mom from 5 years ago - look how they have grown!! Mom is still the same! 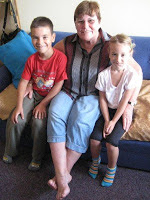 And another blast from the past we managed to fit in when we went to Zagreb (where Mom flew from) was Ivana. She used to live in Banja Luka and Mom met her then. It really was great to see her again, as the last time we organised our schedules to make it happen was 2010!

I love the fact that people enjoy seeing Mom almost as much as I do. It was soooo great to have her come again and be a part of my world here. Can't wait until next time!
Posted by beeinbosnia at 3:37 pm 1 comment:

Adventures with my mother!

We started in Split which she flew into. We had one morning to explore all the wonders of Split: 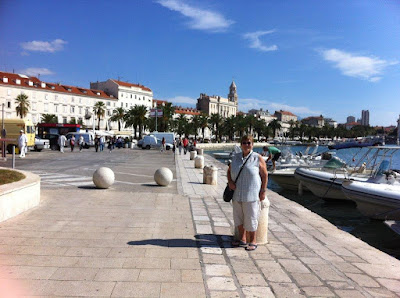 As Split is built up around the ruins of Roman Emperor Diocletian's Palace and there were some soldiers in the main square to remind us of this: 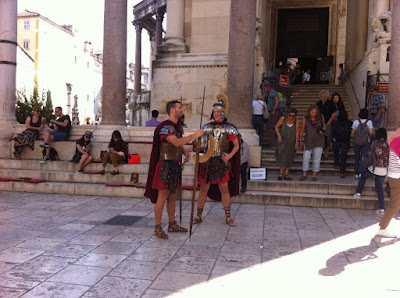 We also stumbled onto some Dalmatian singers, who were fantastic - Mom could have stayed here all day! But I managed to drag her away to go look at the rest of the city... 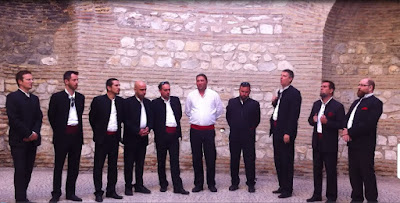 Proof that I was there as well... such a beautiful day too! 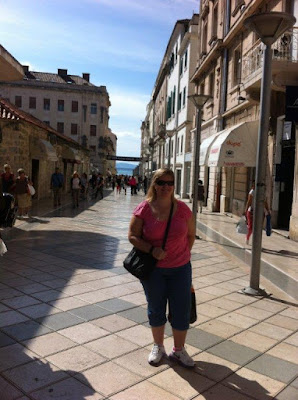 We had a pizza lunch on the main promenade... 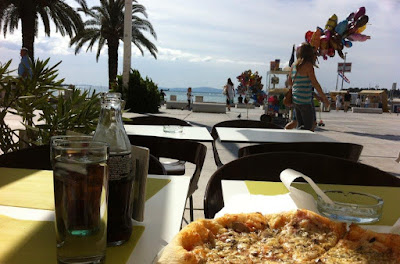 Before heading to the Brela Women's Conference in well, Brela, about 50km down the coast. It was a lovely conference with about 70 women from all over the Balkans and beyond... and of course the only photo is of the beautiful sunset the one night: I love Brela sunsets! 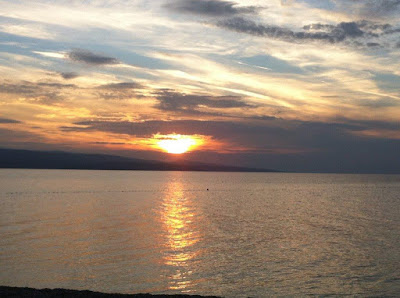 We then headed to Mostar in Herzegovina (south part of Bosnia Herzegovina) where I was to do the first two modules of a Business Training course. We stayed with my friend Carolyn (I don't have a photo of her), but mostly hung out with Jelena and Jennifer. We went to Blagaj the one day where there is a Muslim Dervish House (and you have to put on a covering to go inside...):
The house is at the mouth of the river Buna and the water comes out of the mountain really fast (but as you can see below they have had a VERY dry summer, so the water level was very low): 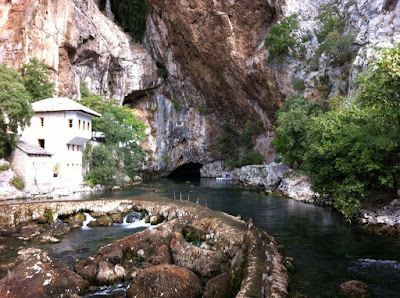 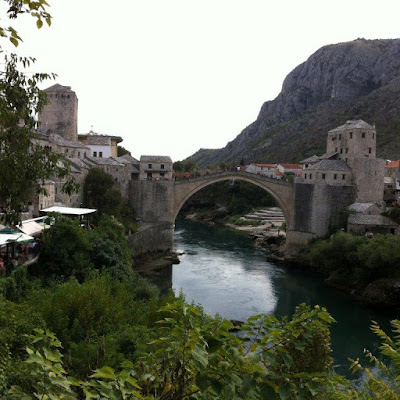 And of course I did what we came to do in Mostar - run the first and second module of the business training. Mom came along and took some pics so you can see what it looked like:(and then sat at the back playing on her ipad as she couldn't understand anything really... but I think she enjoyed herself!) 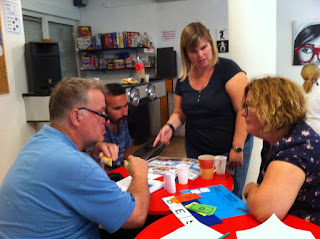 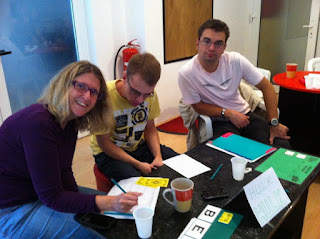 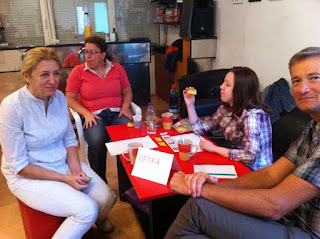 It was a lovely group and we had a great time - two are interested in running the course in the future as well, so it is a bit of training for them to see how to run it in the future... I will go back later this month to do the other two modules.

We came back to Banja Luka yesterday and she is here for 5 days before heading back to England...
Posted by beeinbosnia at 5:22 pm 2 comments: