So one thing I like having is visitors... really. I do. I love it even more when they are FUN visitors... and in the last two weeks that is what I got. Yay!

First, Hannes and Doris (from Germany and Switzerland) came for a "member care" visit. They are YWAM Central Europe's member care people so part of their job is to come alongside those of us in far flung places and make sure we are doing alright. They left their two kids behind and came to visit Kip and Erica in Sarajevo and then on to me. I told them to bring their swimsuits as the forecast was or 40 on the day they were here - so we went to the pool and did member care in the pool! Great idea! They were many years in Albania, so they really come from a place of understanding some of the things that we as foreigners do go through living in a cross-cultural situation, so it was great to have a chance to just process and chat with people who understand!!

They did get a chance to come with me and the InterVarsity team to the children's home as that was scheduled on the day they arrived. I know they had a good time seeing a little bit more of what I do. I did take them around and show them the sights (in the early morning and late evening) and we had a wonderful time... do you think I got a photo of them while they were here? NO! So here is a random one I got off their facebook, ha ha! They are supersweet as you can see from the photo: 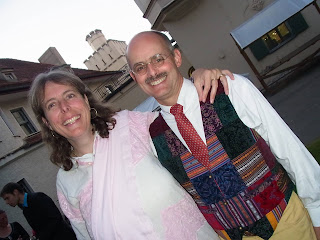 My next set of visitors who decided to pop by this summer were Andrew and Lydia (from Texas and Wales) who live in Serbia.  They are newlyweds and just good fun to have around. Again, 40deg weather me meant we went to the pool on the first day, which I don't think they were too unhappy about :) They were here for two days, so on the second day with a forecast for afternoon thundershowers (which came and cooled things down after a month of plus 35!) we decided to go on a drive to Krupa na Vrbasu. I have been with many people there over the years - including last year with Tanja (and her family) who had never been before. I took Andrew and Lydia as they have this great trout restaurant which gets the fish from the fish farm across the road... so you order and they go and get the fish out of the basin: what you eat was alive less than 1/2 hour before! So great!

Again, I didn't get a photo of the two of them: but here is a lovely photo of them from the Facebook: 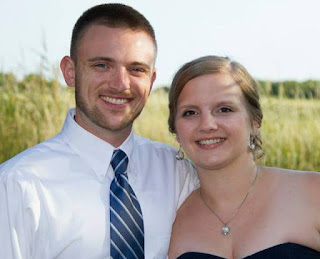 We also had a great time playing some games and just catching up. However, it wasn't all play and no work - we are talking about running a Discipleship Training School in Bosnia, Serbia and Croatia and so these two are visiting all of us in our locations to talk about this school and what we can each commit to it. It is only set for 2017, but we are already recruiting if anyone in YWAM is interested in being on staff! I also discovered a fellow voracious reader in Andrew, so he was in awe of my books (I have collected a few over the years - as people leave they leave them with me, or people have brought them for me and one time I brought 15kgs of just books from the UK!) and left with about 30 of them on loan... he was sooo happy!

I hope you enjoyed reading this blog as much as I enjoyed having these visitors... anyone else want to pop over??
Posted by beeinbosnia at 5:34 pm No comments:

From one end of Europe to the other... Portuguese adventures...

As my usual summer holiday companions, Ljilja and Sina, wanted to do something different this year, we decided to leave the eastern bloc and travel to Portugal... we found some cheap flights and accommodation and we were all set for a wonderful well-deserved break. (after 9 back-to-back weeks of hosting 3 different teams, it was definitely time for me to get a break!!)

We started with two days in Lisbon. This is the view from our apartment: (and the funny story is that I sent my sister this pic via whatsapp and she sent me one back from the apartment they were in in December, and it was almost exactly the same - they were just two doors further down!). We were right in the heart of the Baixa, the downtown walking district... 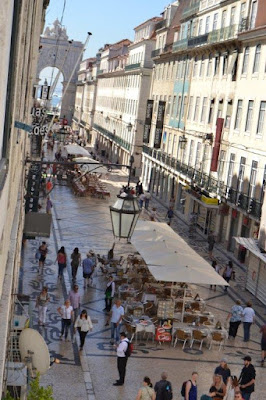 We did a LOT of walking in our two days: around Chiado, Alfama and up to the Castelo: Here are Ljilja and Sina in one of the windows of the Castle... 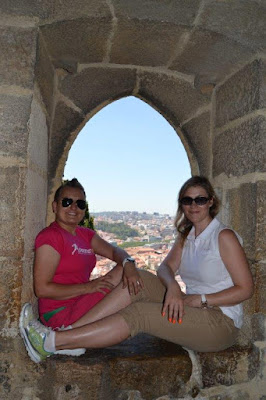 The views from up there were fantastic: They have a bridge built by the same guy who did the bridge in San Francisco, (looking very similar!) and also a Christ statue inspired by the Christ the Redeemer in Rio... 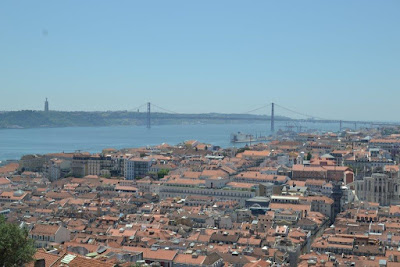 Then it was time to spend a little time in Sintra (still part of Lisbon, but were the Kings and nobility used to summer): Here I am with Sina: 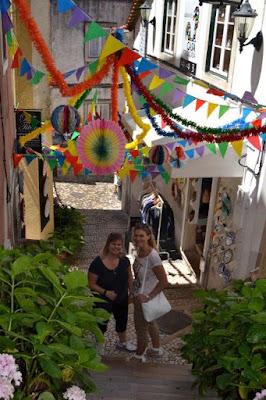 It was quite festive, and we also got to see the palace there (but the photos don't do it justice), before heading to the westerly most point on continental Europe: it was a leetle bit windy: 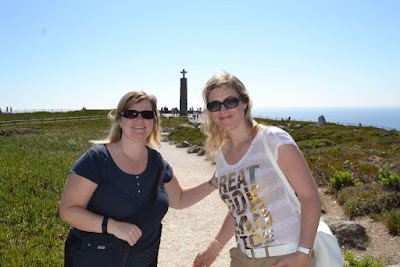 But the wind doesn't bother the short-haired member of our crew: here she is looking back from the cross towards the rocky coast and the lighthouse: 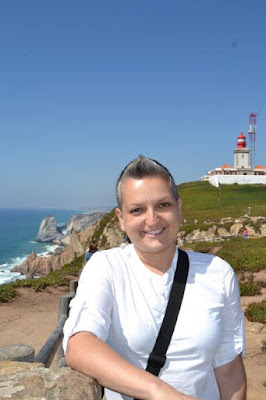 After a whirlwind two days it was time to travel down to lovely Lagos on the Algarve coast: 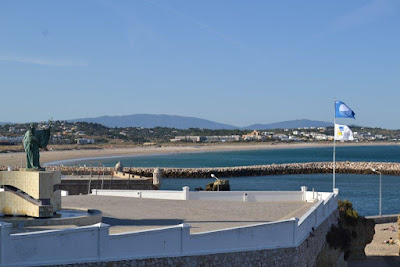 The beaches were lovely - see the long "meia praia" above in the background and below was our favourite: little "batata": 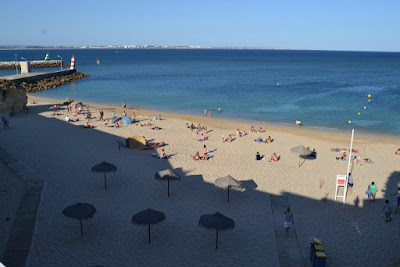 But to be honest, the water was pretty chilly, so we spent a lot of time at the pool at our complex... the views made us feel like we were on a beach!! 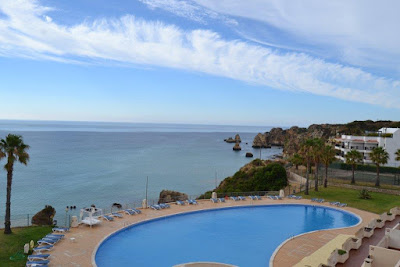 And we also hung out a bit in Lagos old town: very beautiful! 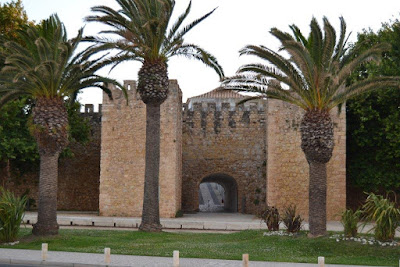 Of course, being in Portugal, my crazy companions just had to travel to "nearby" Spain as well: so we went to Seville for the day: 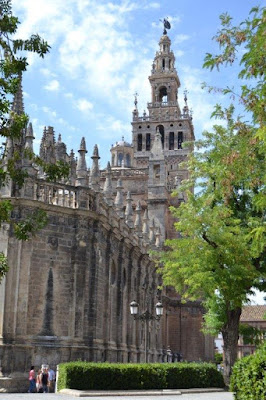 Despite the heat (and being there at the hottest part of the day!) we did have a wonderful time wandering around: Above is the Cathedral and below is the Plaza de Espana: 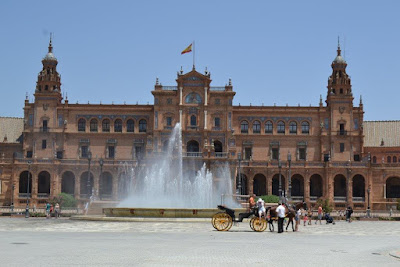 After seeing all the horse and carts everywhere, we decided to ask how much it would be to take us back to where we started (so we didn't have to walk)... the first guy wanted €45, so we walked away, but then another driver offered us less and then another even less, until we got one who gave us the ride at €20!! 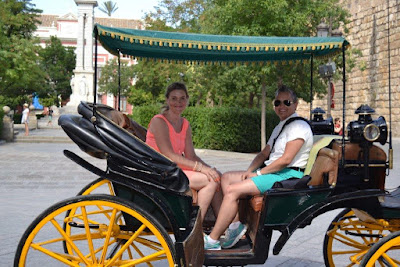 We did see some other parts of the Algarve, but we spent most of our time in Lagos. It is well known for its beautiful craggy rocky coastline: 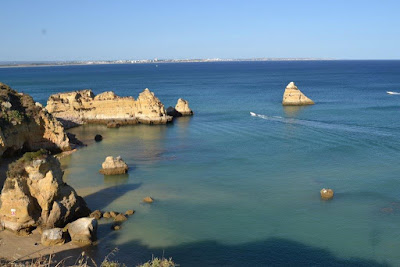 And the best way to view it is by boat: especially with a local fisherman as guide: here were are with Gigi, who looks so excited to have us on board :) 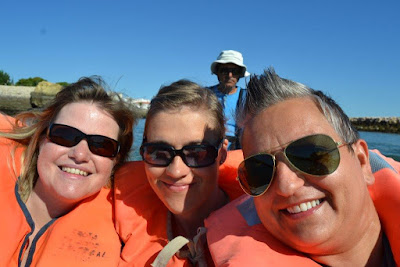 He knew enough English to tell us what some of the stones were called: Wedding Cake 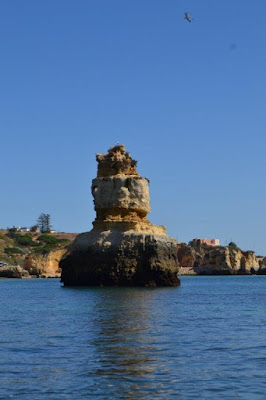 The one on the left is "Titanic" 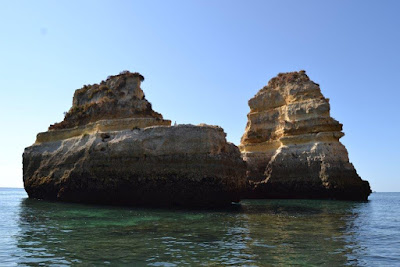 Otherwise there were lots of lovely formations to see: 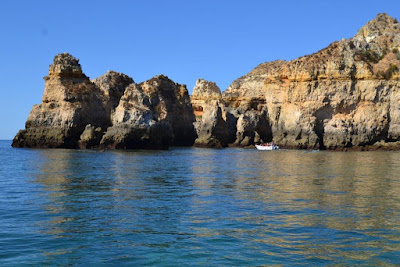 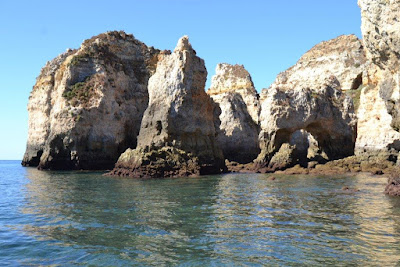 And lovely caves to enter: 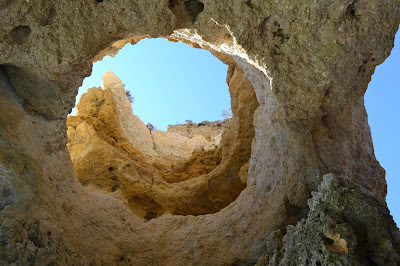 And one final picture of beautiful Portugal... 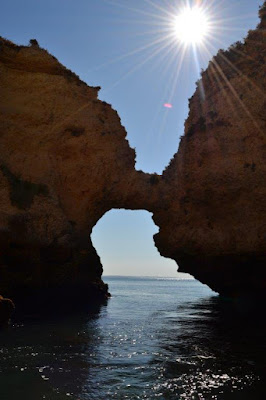 Then it was time for us to head on back to reality... after a relaxing (8 books read!!) and refreshing holiday!
Posted by beeinbosnia at 9:04 pm No comments: