After 18 months of planning and hard work, the 2014 Bosnian Faith and Conflict experience was held successfully in Banja Luka and Sarajevo, with a day trip to Srebrenica. There were just over 30 participants from 15 different nations, mostly working with YWAM, but also some others came along for the ride as well. And what a ride it was... 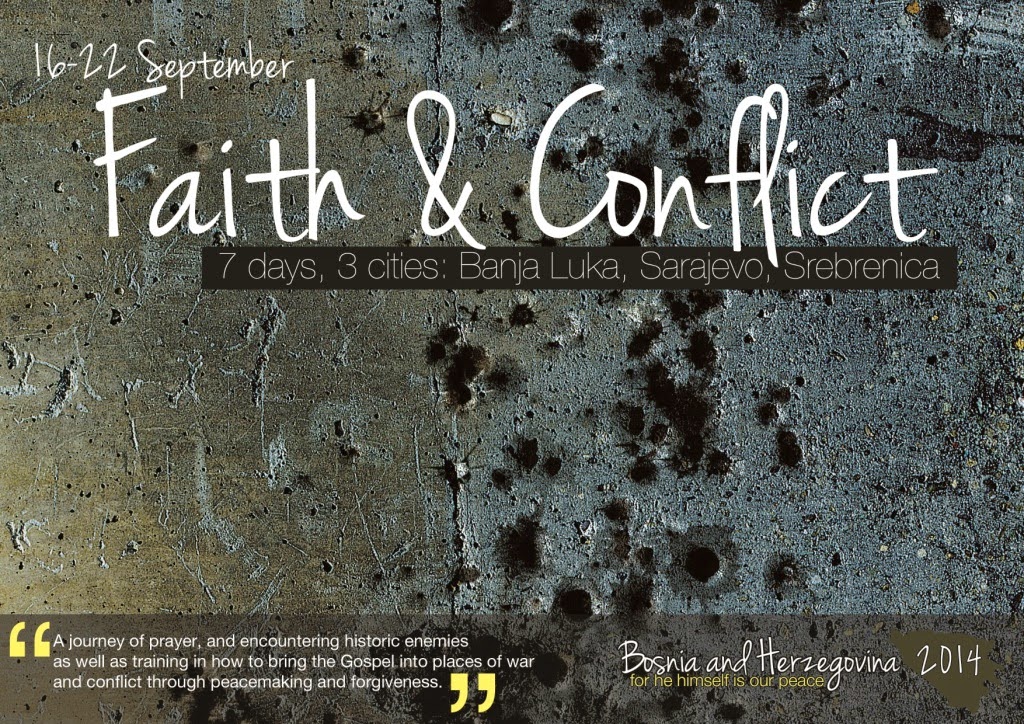 We were in lectures some of the time, but also heard from local people, both in Banja Luka and in Sarajevo. Below is one of my friends, Ceca, who works with a local NGO, sharing on the different things they do in the area of reconciliation: (we were using the nearly finished Church building in Banja Luka - doesn't it look amazing!!! I can't wait until it is completely finished and we can really start using it!) 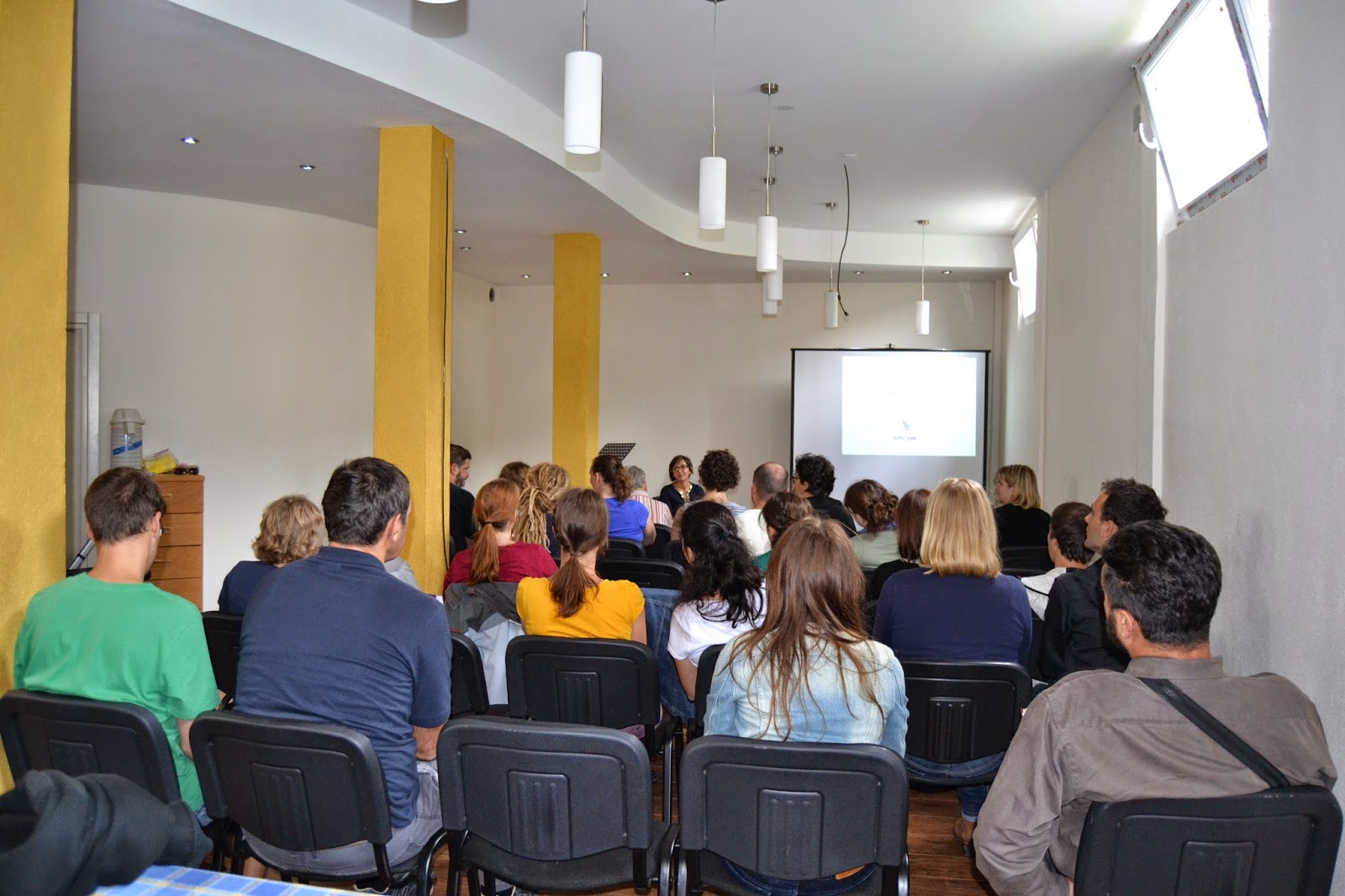 But it wasn't inside all of the time - both in Banja Luka and in Sarajevo we took a tour of the city. I did the Banja Luka tour, and below is Aida (in blue) doing the tour in Sarajevo: She did a fantastic job! Wrangling 30 people plus children is not easy!! 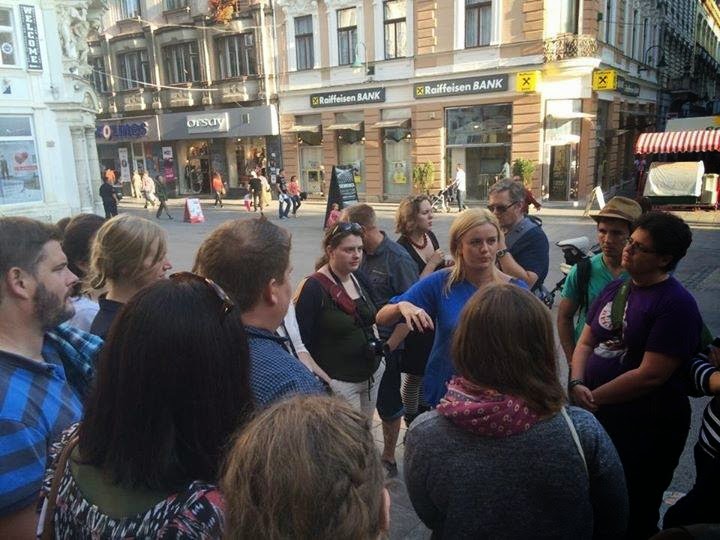 Below is most of the group in front of the library in Sarajevo. It really was a great group of people, and I was really sad to say goodbye to them all... 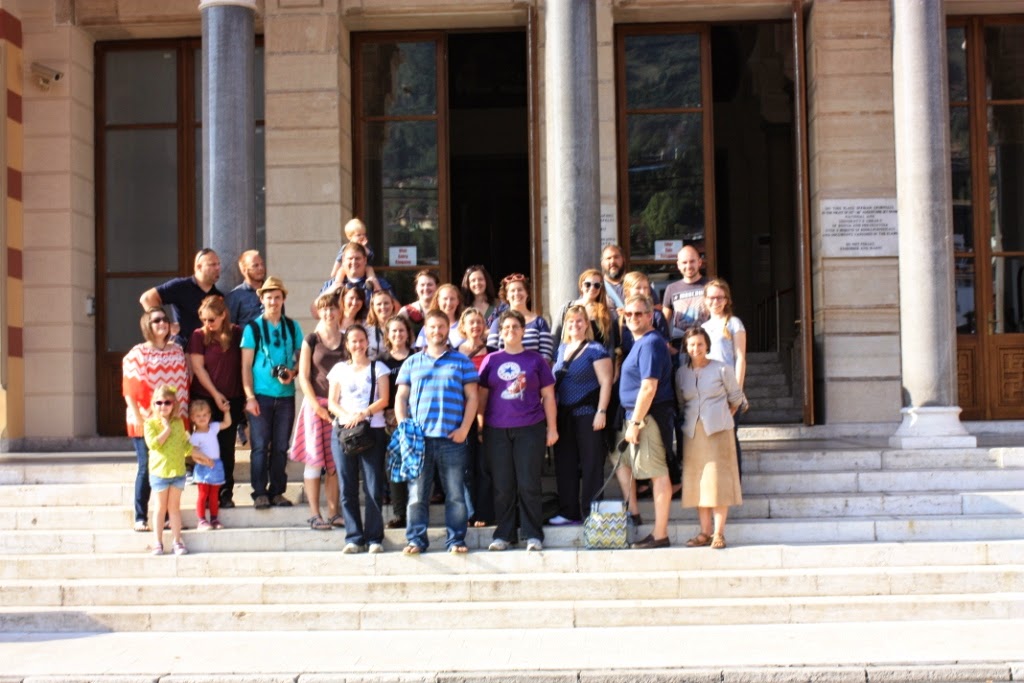 As I said, we had a great tour in Sarajevo and here is Jonny at the place where 100 years ago Archduke Franz Ferdinand was assassinated, and this led directly to the start of WWI: 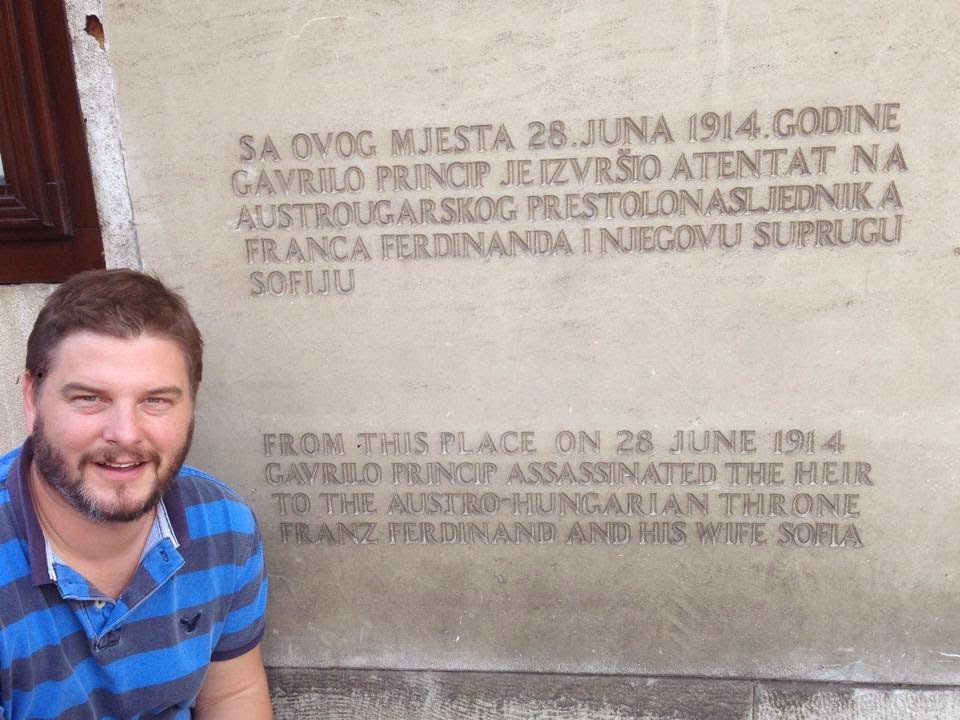 And no tour of Sarajevo would be complete without cevapi with kajmak  :) (and in fact, the food was also a highlight - we had local ladies who did most of the cooking, and it was great and mostly local recipes, meaning they got to experience local homemade food that way! And everyone really enjoyed the food!) 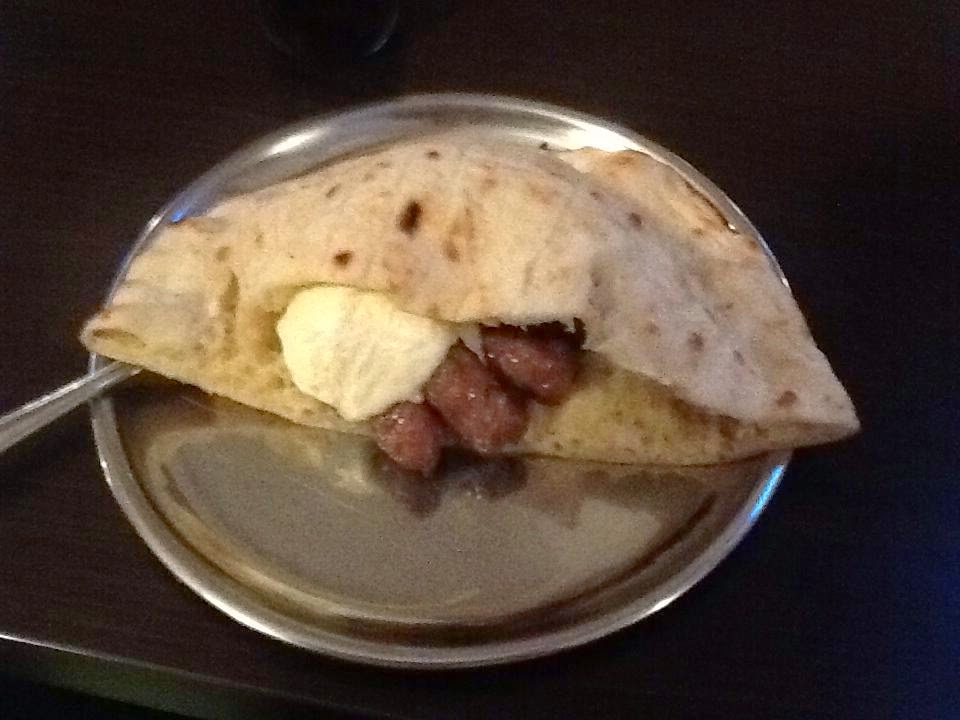 We also had a series of workshops with local believers in Sarajevo - here is Jonny speaking with Pastor Sasa doing the translating. Although we could have had more people, it was still great for those that did attend. 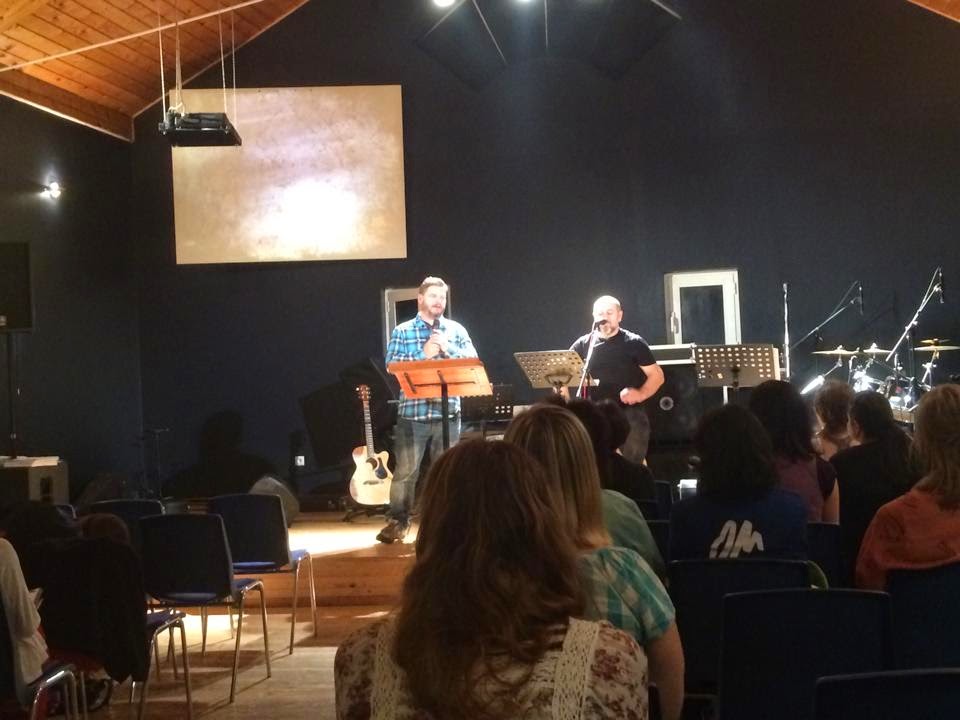 On the last day we took the long drive (and as we got lost, even longer...) to the memorial to the biggest massacre since WWII in Srebrenica. It was REALLY hard, but I am glad we did it. The memorial is poignant and the tour guide was excellent. He only told me in confidence that he had actually been there the day that men and boys as young as 13,14 were separated out, and only through some miracle did they think he was took young (even though he was also 13) and his life was spared... 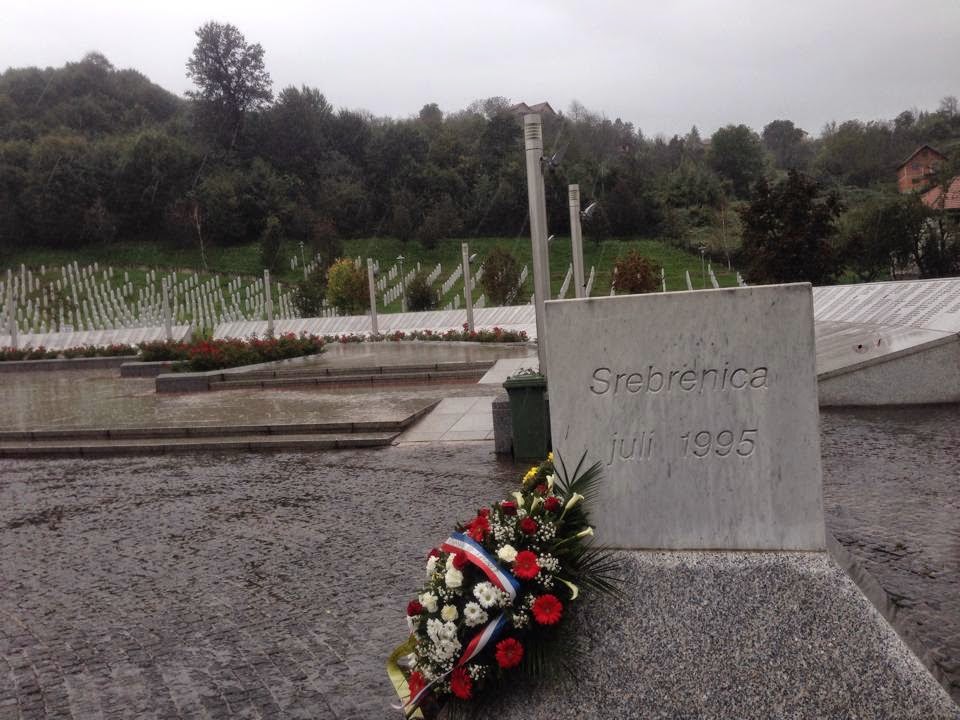 It is also good to remember that many people were killed in those days by Serbs, but so were many Serbs were killed before that in the surrounding areas by Muslims. War is never clear cut and easy to understand... with one side in the right and one side in the wrong: but one thing is clear: everyone suffers. And everyone needs to learn how to get passed it and forgive... Reconciliation is only possible if both sides forgive and learn to move forward together again: otherwise it is not reconciliation.

All in all, I think it was an amazing experience for everyone involved, and we are already talking about having it again in two years time! It was hard work for me as I did all the logistics for 30 people in two cities, but I also think it was worth it as not only did we all learn more about reconciliation, but they all got a taste for Bosnia Herzegovina, and who knows, maybe they will be back here one day!! 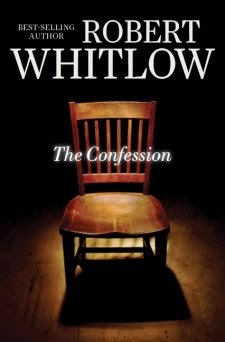 Having read and enjoyed other Robert Whitlow books, (some of which I have reviewed here and here) I grabbed the chance to read and review "The Confession" for booklookbloggers.com

The story focuses on Holt Douglas, an assistant D.A in Ashley County, Georgia who has a secret which he has hidden since he was a teenager. As he prosecutes people for all the things they do wrong, he has forgotten that he is actually in the same boat as them, having made a horrendous mistake which should have him in jail as well. It really reminded me of the need to take the plank out of my own eye before taking the speck out of my neighbour's.

Another main character, Deputy Trish Carmichael, is wrapped in unforgiveness and bitterness over the accident that took her father and paralysed her mother. Through how the two story lines connect, Robert Whitlow not only shows how secrets can keep us imprisoned in the past, but also how bitterness does the same as well.

"The Confession" is not just a wonderful keep-you-guessing legal thriller, it also has levels of love interest which keeps you guessing as well! I would recommend it highly to anyone who wants a fulfilling read for the soul, as well as light entertainment for the mind.

I received this book free from the publisher through the BookLook Bloggers <http://booklookbloggers.com> book review bloggers program. I was not required to write a positive review. The opinions I have expressed are my own.
Posted by beeinbosnia at 5:55 pm 2 comments: