This year in Jerusalem | And praised be the Lord

Jerusalem is the centre of the world :) 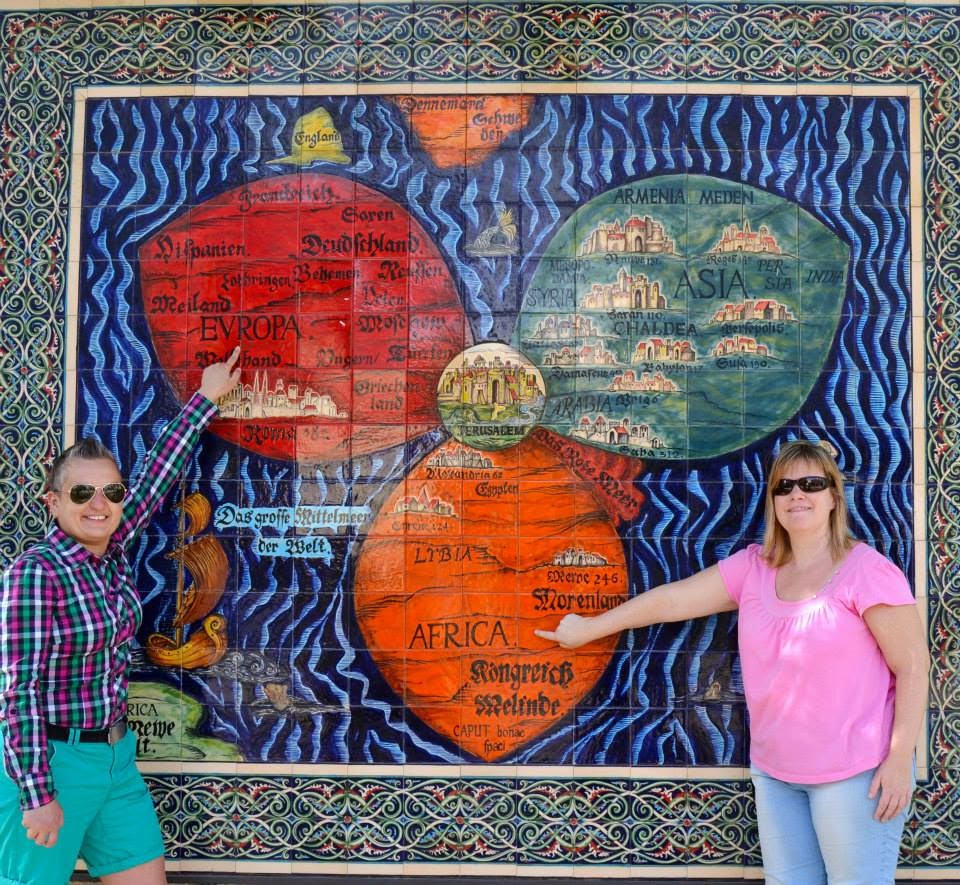 After always kind of dreaming that I would go one day to the Holy Land, but never actually believing that it would happen... my good friend Janice left Bosnia to go live there 5 years ago and was always inviting Ljilja and me to go visit her there... and I kept thinking "next year" and then another year would go by and we wouldn't go... And then sometime last year Janice let me know that this may well be her last year in Israel and if I wanted to come, I needed to get a move on. As I am turning 40 this year in June, I decided that it would be a good thing to do to start celebrating my 40th! And started looking at ticket options... As Janice was only free over Easter (and this year it was Passover, and BOTH Easters at the same time) I was actually surprised to find some really reasonably priced tickets (granted out of Budapest, a 6 hour drive away) and so the game was on...

We had a HUGE hiccup when Ljilja tried to apply for her visa (she needs one on her Bosnian passport, whereas I have my lovely British one!) and was told that the Embassy was on strike!! All the Israeli diplomats around the world went on strike and she was caught in the middle. Praise the Lord about 10 days before we were due to go, the strike ended and we were able to get her visa and we were good to go!

Before we went, I asked a few questions about logistics, including asking Janice about how to get from the airport to her house (they have shuttle taxis, and so to find out about that...) this was her reply:

Okay, this one is much more tricky so you might need to write it down.  First, after customs, you walk through the big double doors.  As you walk through them you have to do two things: first look for the person with blonde hair jumping up and down frantically waving their arms wildly with excitement. Secondly: listen carefully for the screams and shrieks of "Ljilja...Belinda... over here!!!!!!!".  Did you write all of that?

It was then that I really started getting excited about the trip! Not only do I go to one of the most amazing places in the world to visit, but I get to see my buddy Janice, what's not to like :)

I am not going to give a blow-by-blow of what we did while we were there as that would take forever (we did fit a lot into 7 days!), but thought I would just share the highlights (and there were LOTS of those)...

#Renewing my baptism vows in the River Jordan is definitely the MAJOR highlight... Ljilja and I renewed, Janice did the baptising! And it was a very special day for all of us... 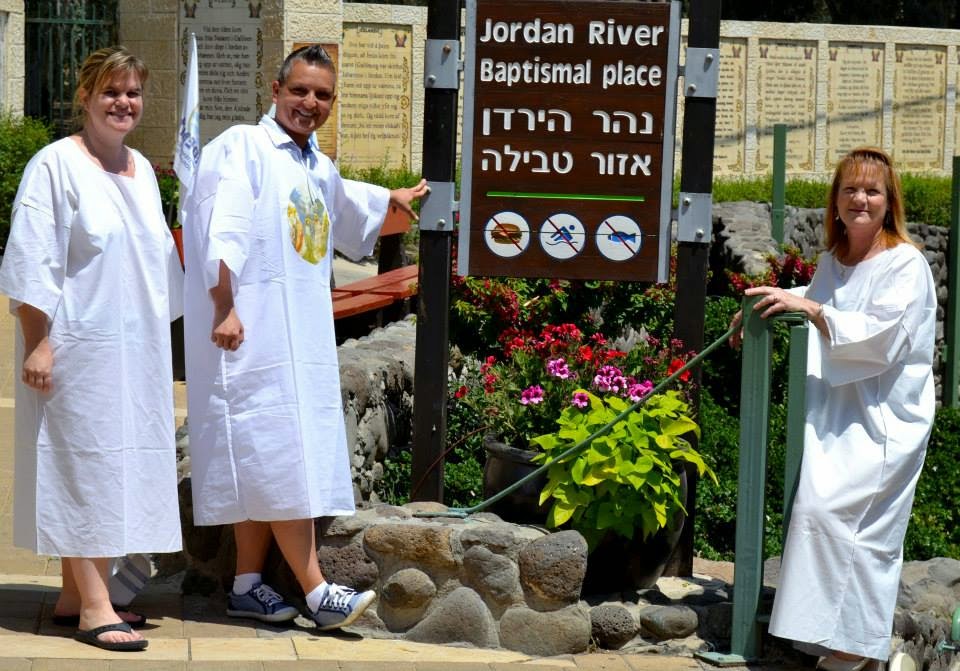 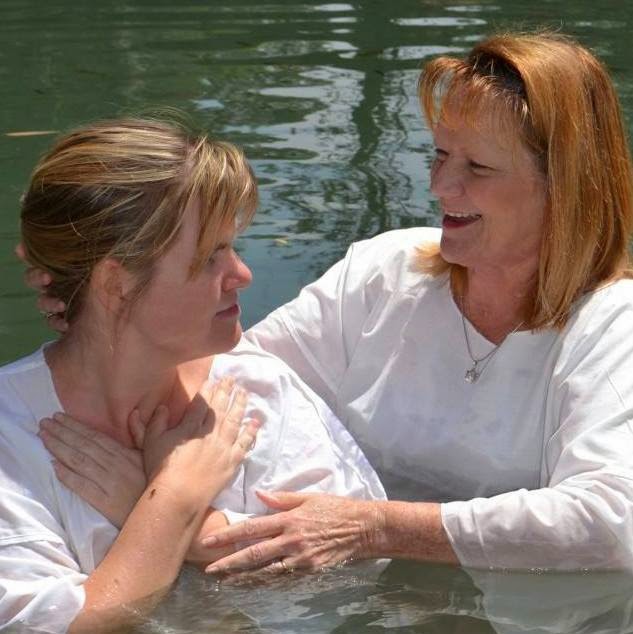 #The next biggest highlight for me was definitely the abundance of hummus :) Here I am digging in at the Lake of Galilee :) 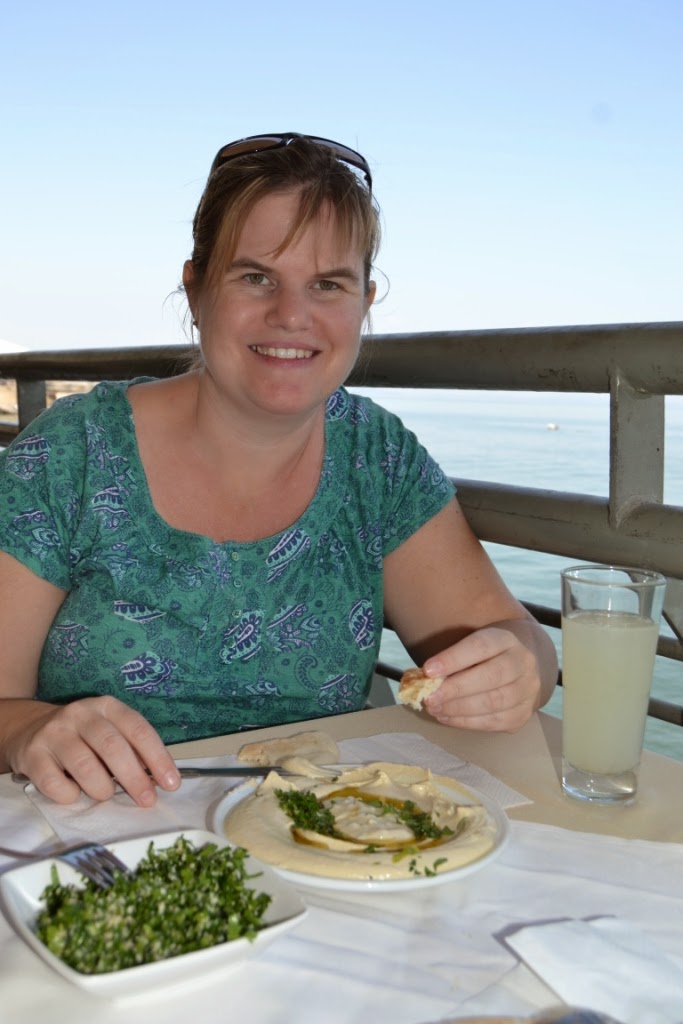 #Another major highlight was the Dead Sea: we floated... 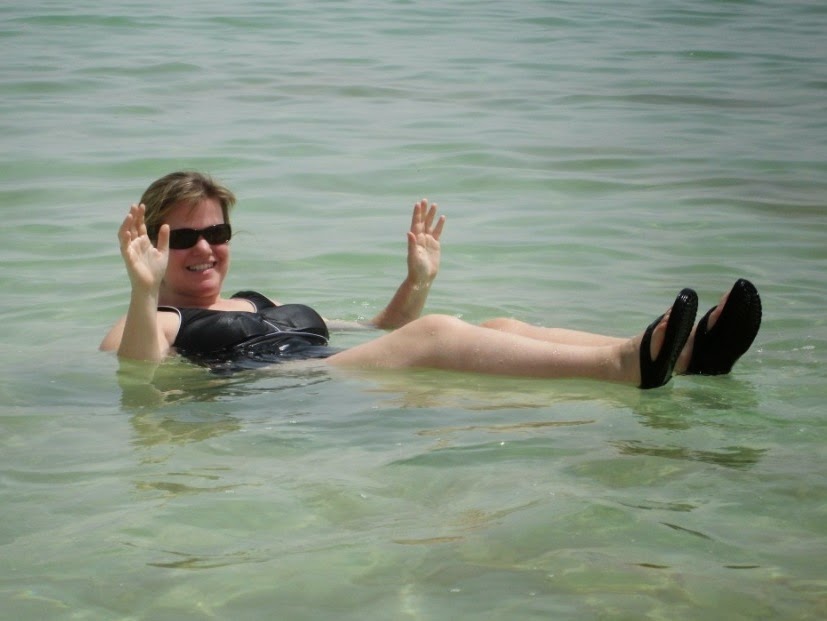 And also did the mud: It was a fantastic day! And we took the bus there and back and that was an experience in itself! :)


#We also spent one day in Tel-Aviv/Jaffa (as we had to hire a car to get up to the Galilee and River Jordan - and the minimal rental was 3 days - we took advantage!). And it was a lovely day: We even got to spend some time on the beach :)

View from the beach to the old city of Jaffa: 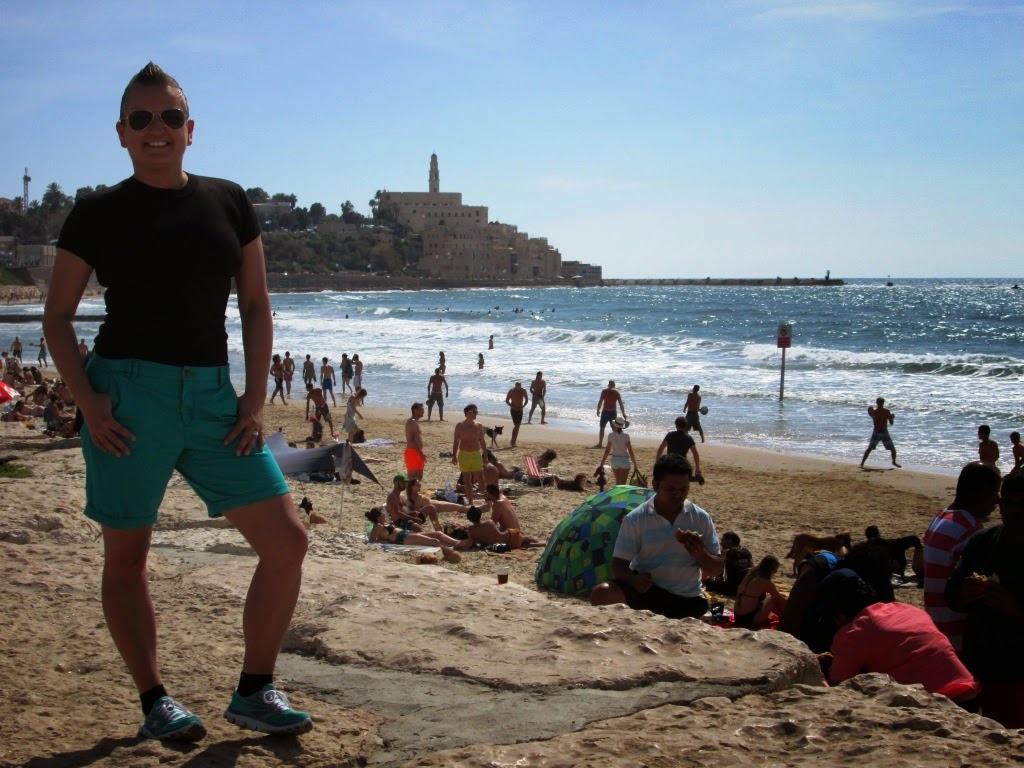 View from the top down: (and Ljlija looking great in both pics:) 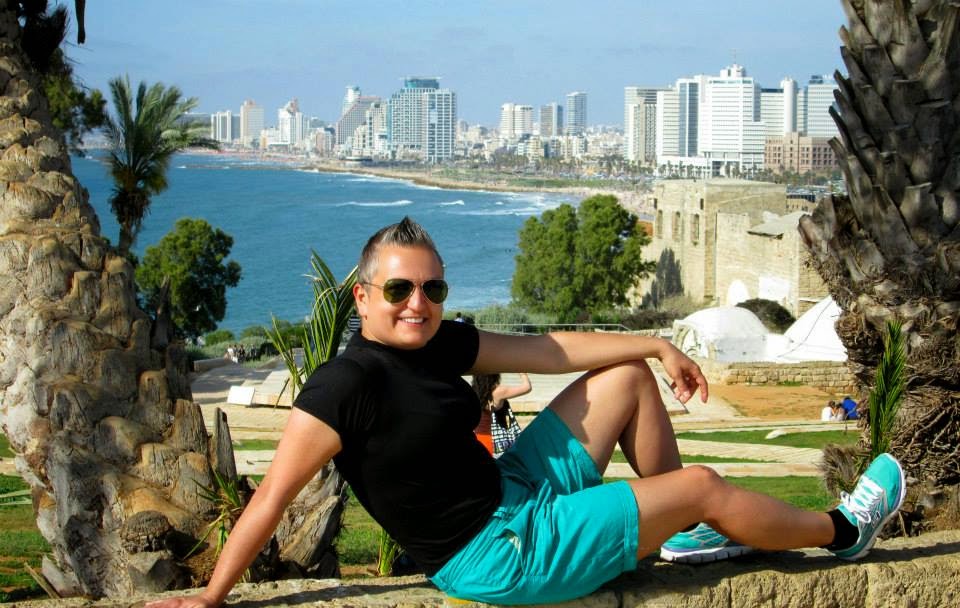 As we were staying in Jerusalem, we had quite a few opportunities to go into and around the sites of the Old City and there really is soooo much to see. The highlights were:

#Wailing wall: and we did go and pray here: 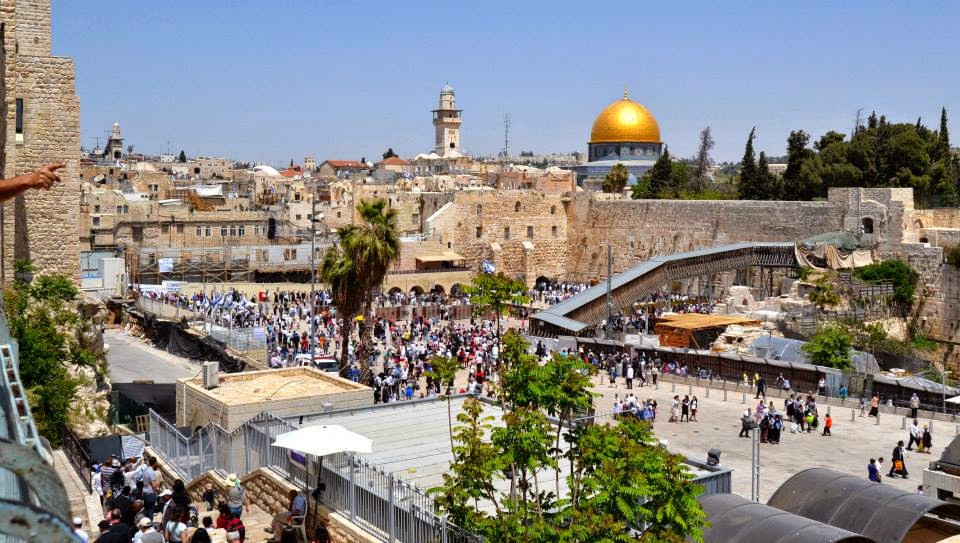 #The Garden Tomb: where many believers believe that Jesus was crucified and buried: 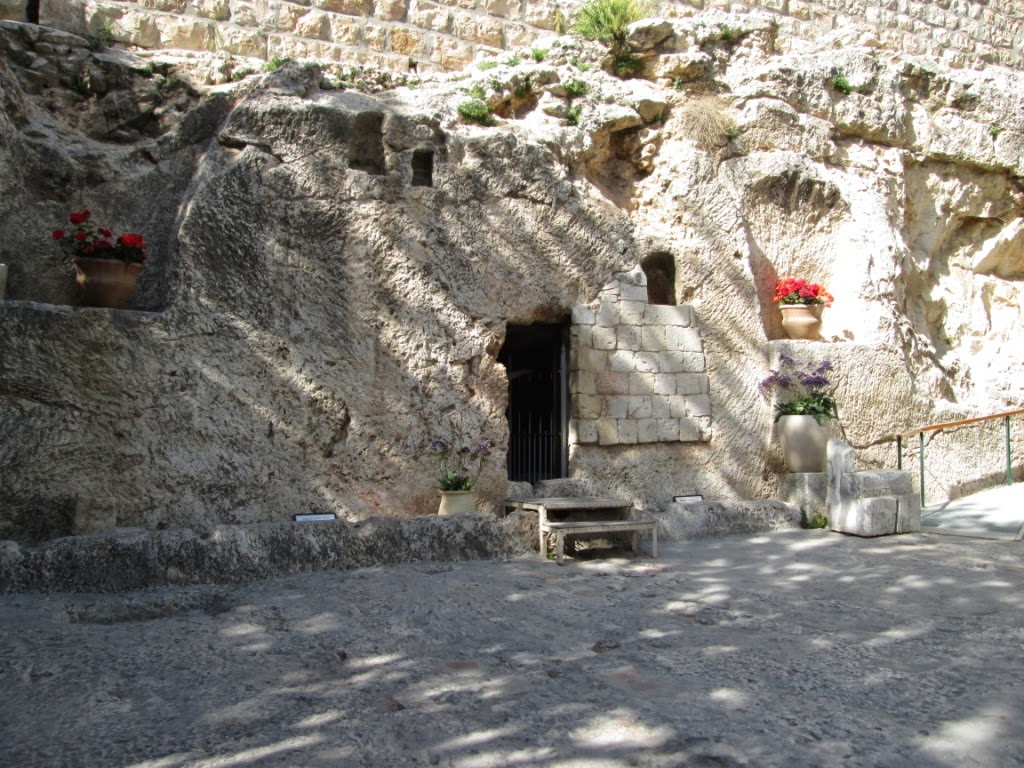 #The Basilica of the Holy Sepulchre: where others (mainly Orthodox and Catholic believers) believe He was crucified and buried and come from all over to be here for Easter: And of course we went down on Good Friday and joined in the madness... not recommended! But it was an interesting experience... 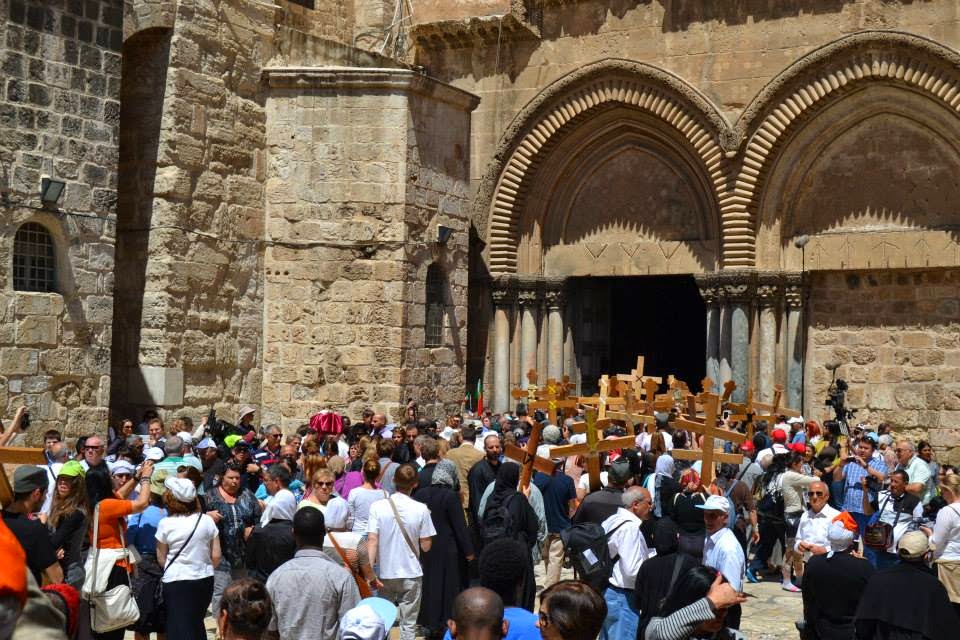 #The Garden of Gethsemane on the Mount of Olives: And an olive tree old enough to have been here when Jesus walked these hills... 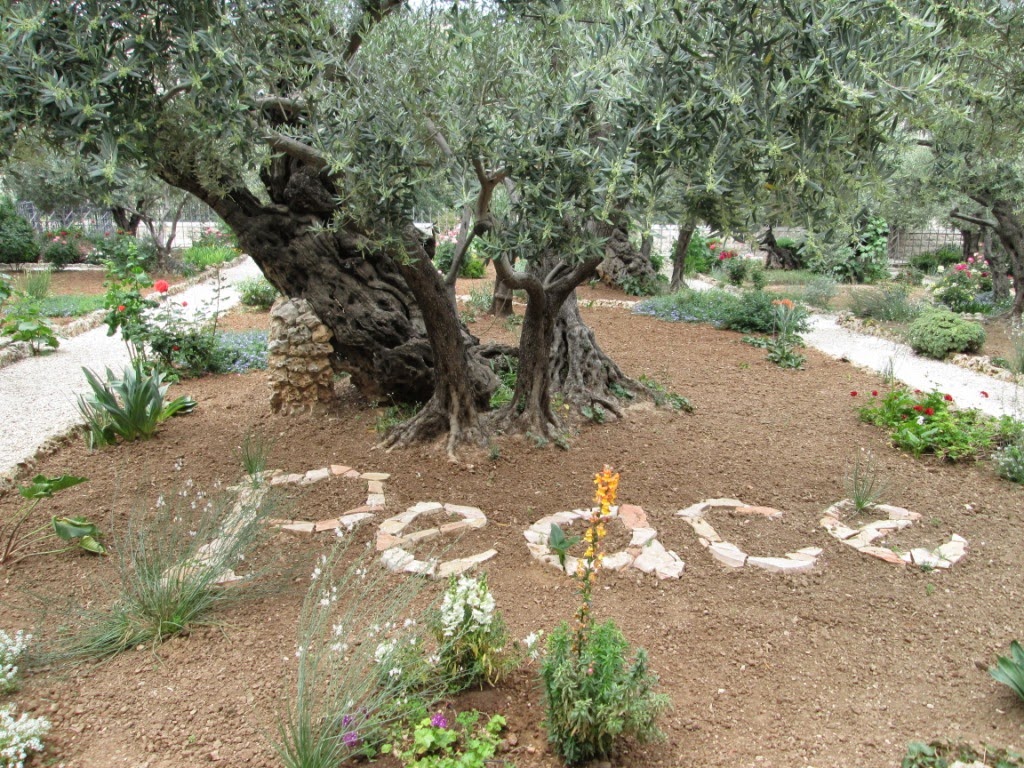 #For Easter dinner we were invited to join a family from Bosnia whose daughter was in Janice's class at the International School a couple of years ago. It was a typical Bosnian dinner, including pork and lamb and lots and lots of food. The husband works for USAID in the West Bank and they have been here 5 years, so it was nice also for them to have Bosnian company! After dinner we went for a walk along a promenade with lovely views of the old city: 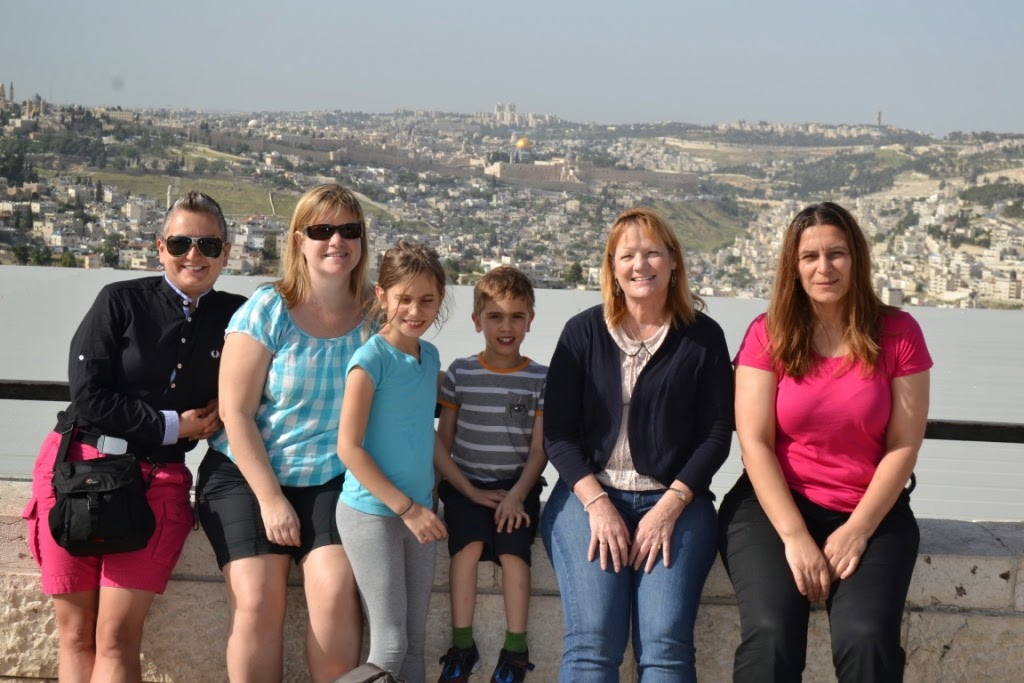 #Janice's tortoise "turtle" who came every morning for his snack :) He isn't actually her tortoise - he belongs to the complex where she lives, and has lived there a LONG time (over 60 years at least!) He reminded me of the tortoises my grandparents used to have! 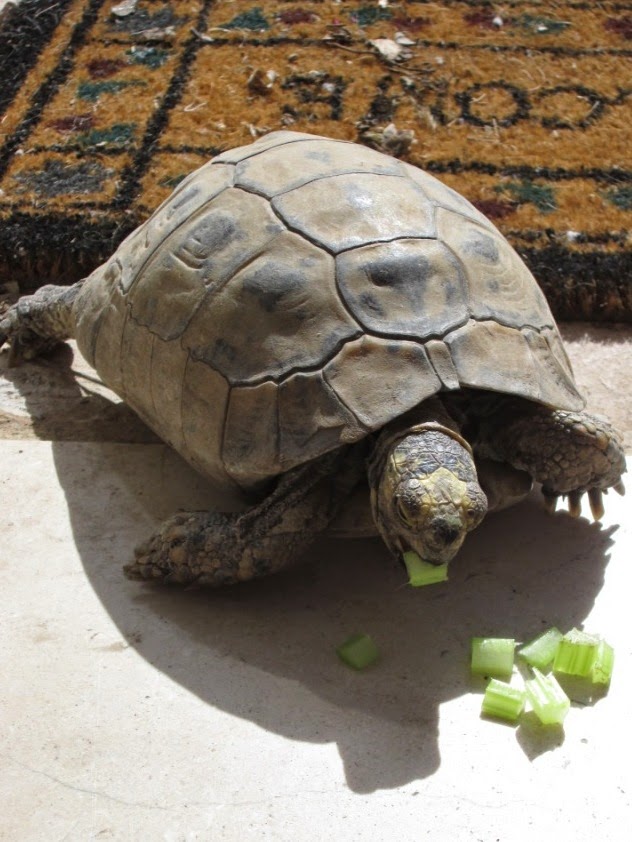 #The last day we went to Yad Vashem, the Holocaust Museum. I don't think you can call it a highlight, but it was something that I really wanted to do... It is really well done and even though I had been to the one in Washington, I was still overwhelmed once again by all the statistics and the individual lives that were affected on such a huge scale. You aren't allowed to take photos, but they had the following on the wall:

And it put everything in perspective for me once again. In the good times we need to praise the Lord. And in the deepest, darkest, hardest, most unfathomable times... He is to be praised.  And that is something that I took away from Israel - even though it is a country more-at-less at war with its neighbours, with soldiers at every corner and checkpoints all along the way, it is a place where the Lord is to be praised. Even though reconciliation and peace look so far away right now for the region. God is to be praised. In all of my circumstances, whether enjoying the sunny weather or trying to make sense of the Holocaust: He is to be praised. That is why people went to Jerusalem on the feasts - to praise His name. And that is what I will try to remember, having been in Jerusalem for the feast this year... that He is to be praised not just in Jerusalem, but wherever I happen to be and whatever circumstances I find myself in... And praised Be the Lord!
Posted by beeinbosnia at 4:48 pm 3 comments:

While I was in South Africa earlier this year, I was trying to explain in English my relationship to my friend Helen. It wasn't easy... We hadn't seen each other in 9 years as she emigrated to Australia, and we had never got our visits to match before now when we did it deliberately... and part of the reason I was in SA in my otherwise "off" year, was to see her (below together at the penguins) and her family. 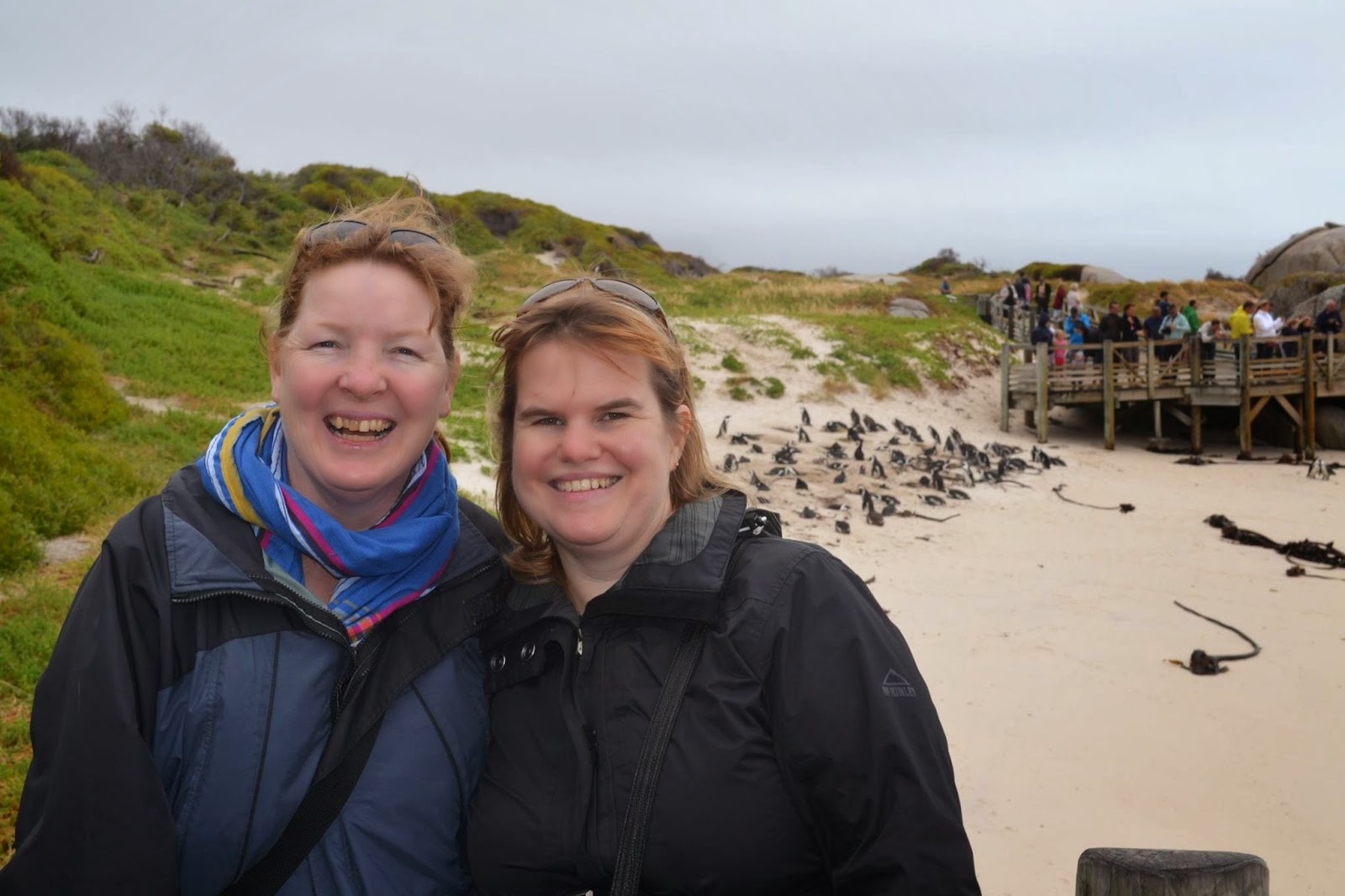 I was struggling to explain the concept of "kumovi" in English. In 1999, I was Helen's Maid of Honour/Bridesmaid, and that in Bosnia is a "kuma". If you are Best Man it is "kum". And forever you will be "kumovi" (=plural). It is almost a close relationship, almost like family once you are kumovi. And here simply saying the word "kumovi" conveys the importance of the relationship - if you are kumovi then it makes sense to go to South Africa to see her, as that kind of relationship lasts forever despite distance and other hindrances... So I was really struggling in English to explain our relationship, saying "I am going to see my very good friend" doesn't pack the same punch! 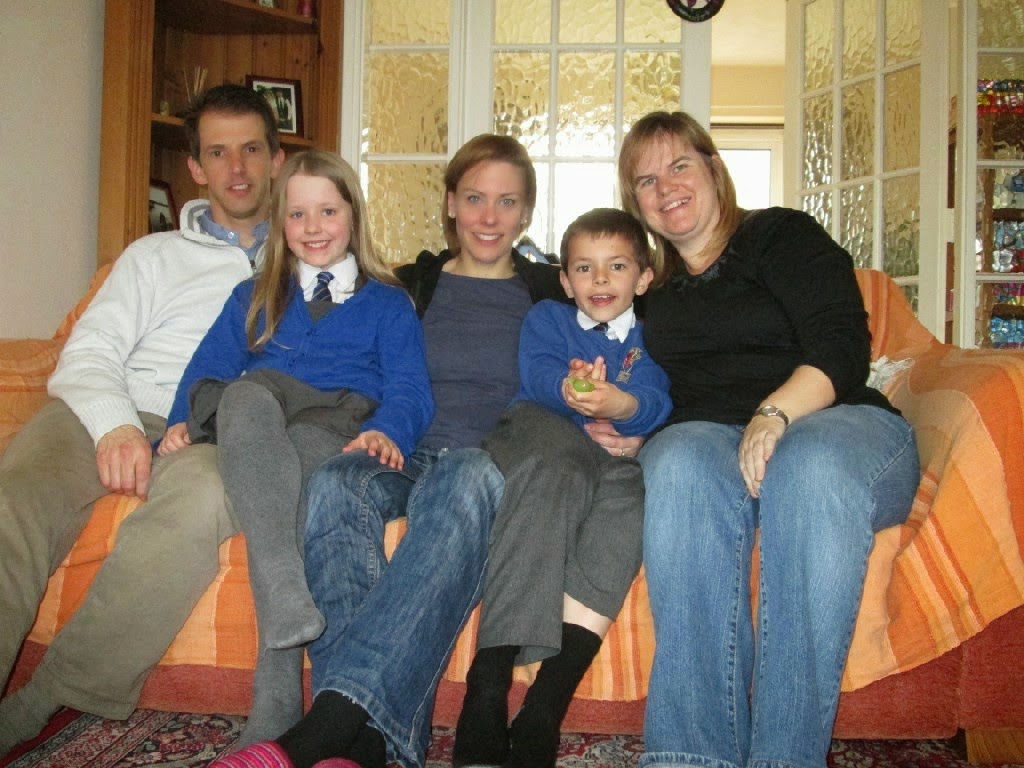 I like the Bosnian concept of kumovi, and I miss it in English...

I sincerely hope you enjoyed this little language and cultural lesson as much as I enjoyed giving it :)
Posted by beeinbosnia at 8:26 pm 6 comments:

Working with children is always fun...


On Thursday it was time to take the children from our reading club at the Children's Home to the library... there are more kids now in the club, and so it is a bit more a challenge, but as always it was a lot of fun!

In the below photo we seem to be overwhelming the lovely librarian, Vesna, just a teensy bit... we need to first return our books from last time and then find new books. The children choose (with our help) then Tanja keeps a record of what new books are taken out so if something gets lost we know what book each child has... (and unfortunately the books do get lost sometimes :( ) 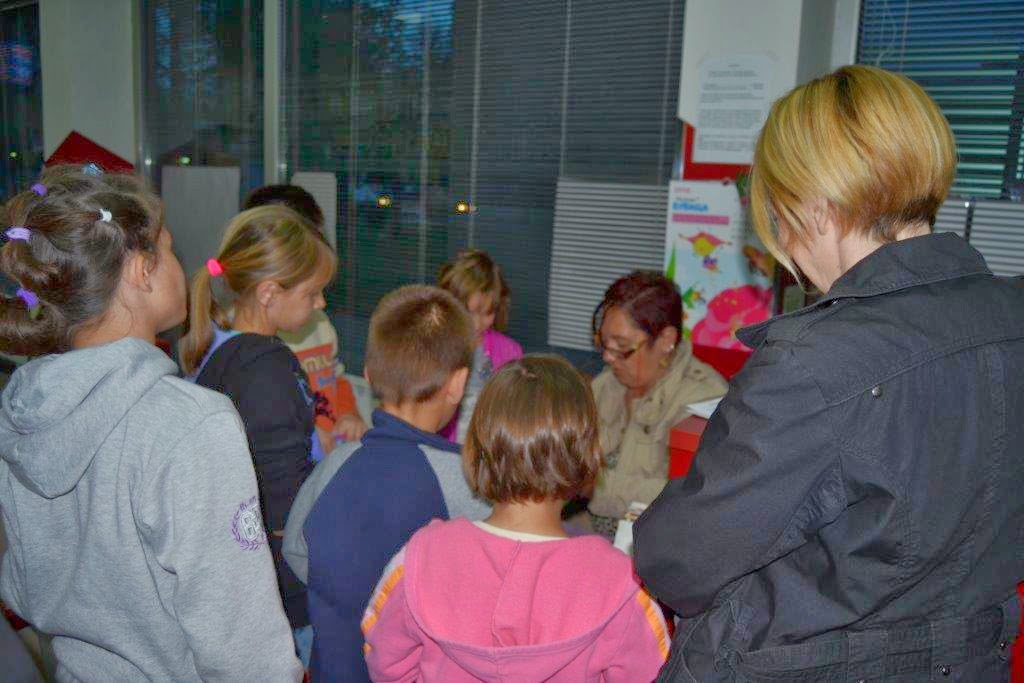 Once they have their books it is time for them to play with the volunteers in the library play room, which is a LOT of fun... and the volunteers are WONDERFUL! 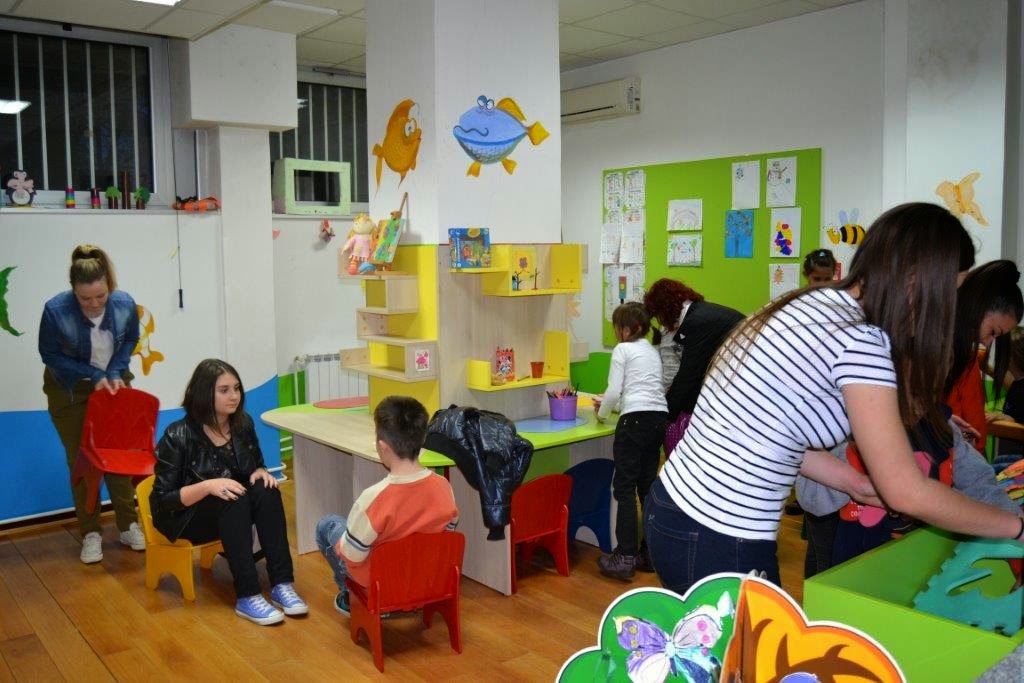 But, I think the best part of the whole trip for the kids is actually the ride to and from the library in the kombi/van (and now that there is more of us one of my colleagues come as well in their car)... we sing loudly along to the radio, tell silly stories, and just generally have fun... and every time we get back they want to keep on driving!!

Now, every Sunday, for the last 7 weeks, my colleagues (and with me helping some of the time...) have been running a wonderful workshop for some of our sponsorship children using material from Samaritan's Purse (who do the shoebox Operation Christmas Child packages). I enjoy going along as I help with the games (the fun part!) and the singing (which is also fun!). Today we played my favourite party game: eating chocolate with a knife and fork! And of course I didn't get any pictures of that...

I did get pictures of some of the more serious parts... Dragana and Ljilja leading a discussion on giving and receiving: 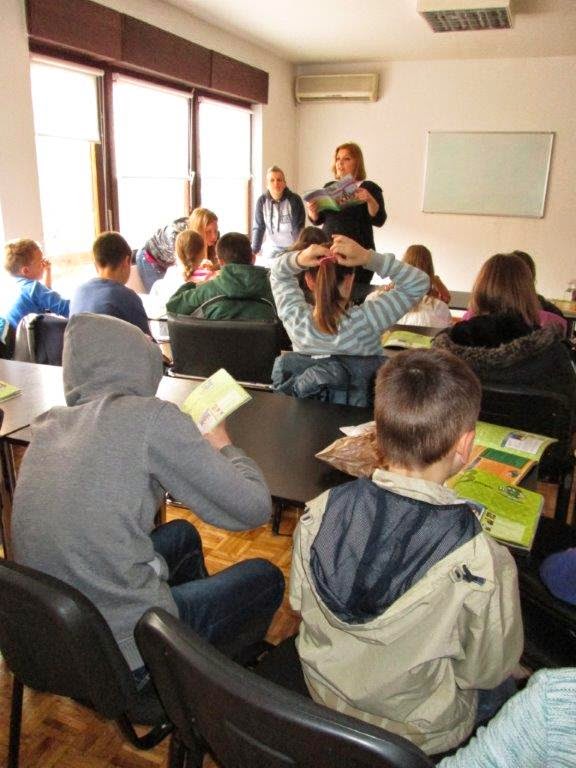 'A'* reading so seriously for all of us from the amazing material (which has been translated into the local language!). It has stories, games, activities, and is just really fun... and at the end of the 12 week program they get a certificate to say they took part :) 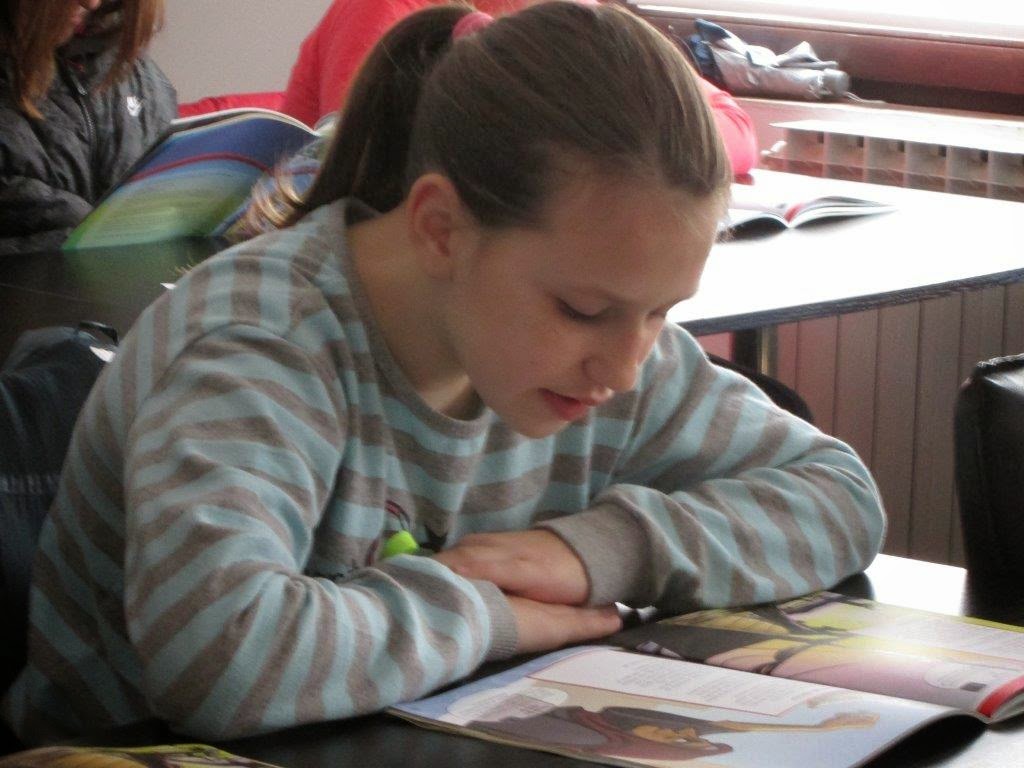 And here is at least one picture of us doing something fun - singing with actions: 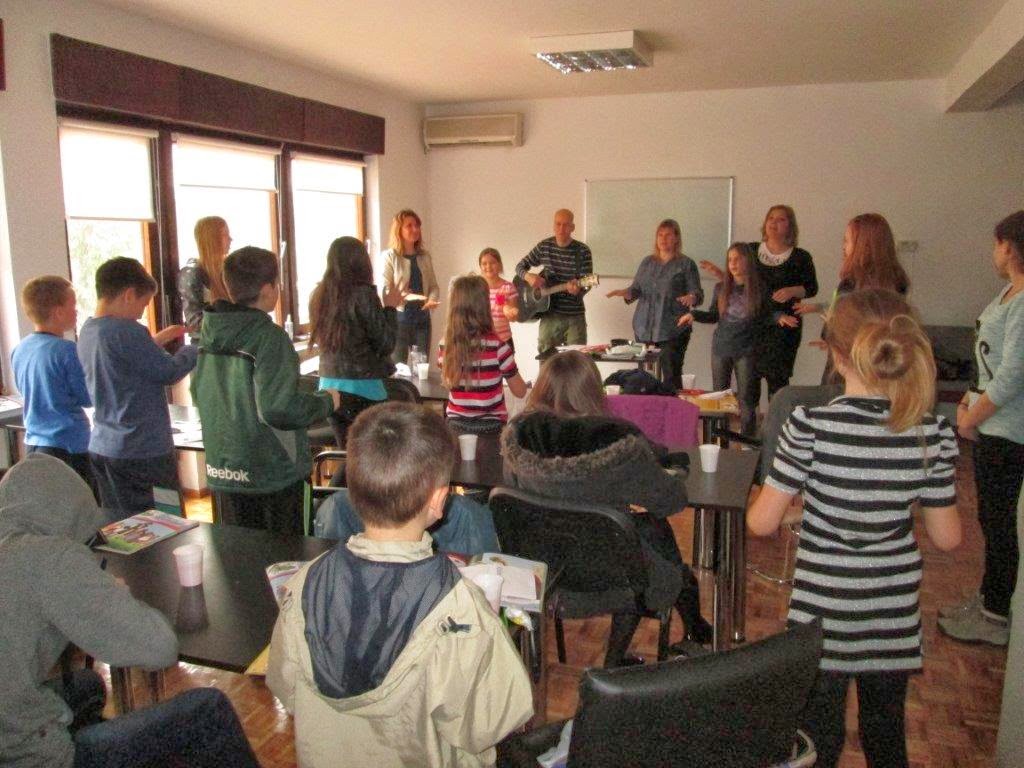 It is also fun because if we answer questions, we get prizes... and today that included some weird teeth-like sweets :) But the below photo is proof that I got an answer right! Yay! 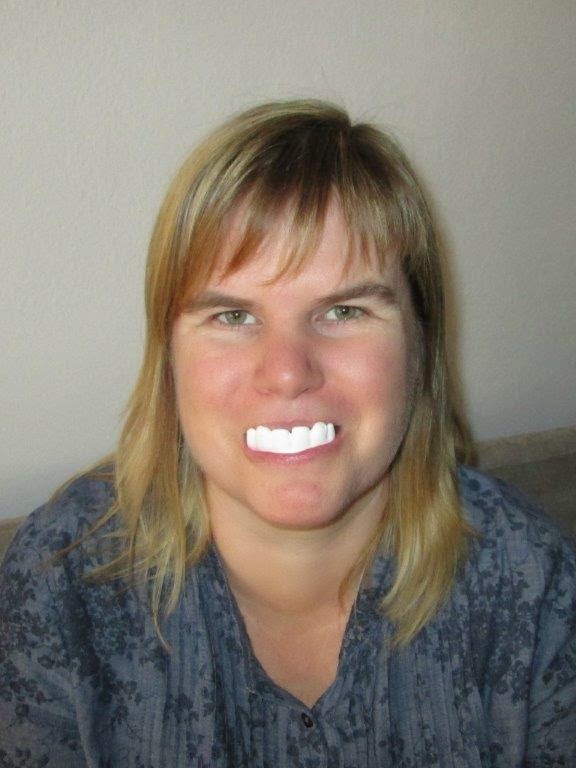 Now the bible tells us we need to become like little children...but even I admit sometimes I do take this a little toooo literally. However, when it comes to working with children, having a fun side does help :)

*due to child protection I am deliberately not putting identifiable pictures or names of children on my blog
Posted by beeinbosnia at 7:55 pm 1 comment: