Working hard for their money...

Well, not really. as both teams we have staying with us and helping are volunteer teams, so they are paying to come and work on our building!! Yeah, the "French" team, besides running English classes and other stuff are also helping our Finnish team (who came specifically to work on the building) to work on the building... Here is a before pic and a pic of both teams in front of the building as it looks now: much of the work has been done on the inside, but you can see the difference on the outside as well! 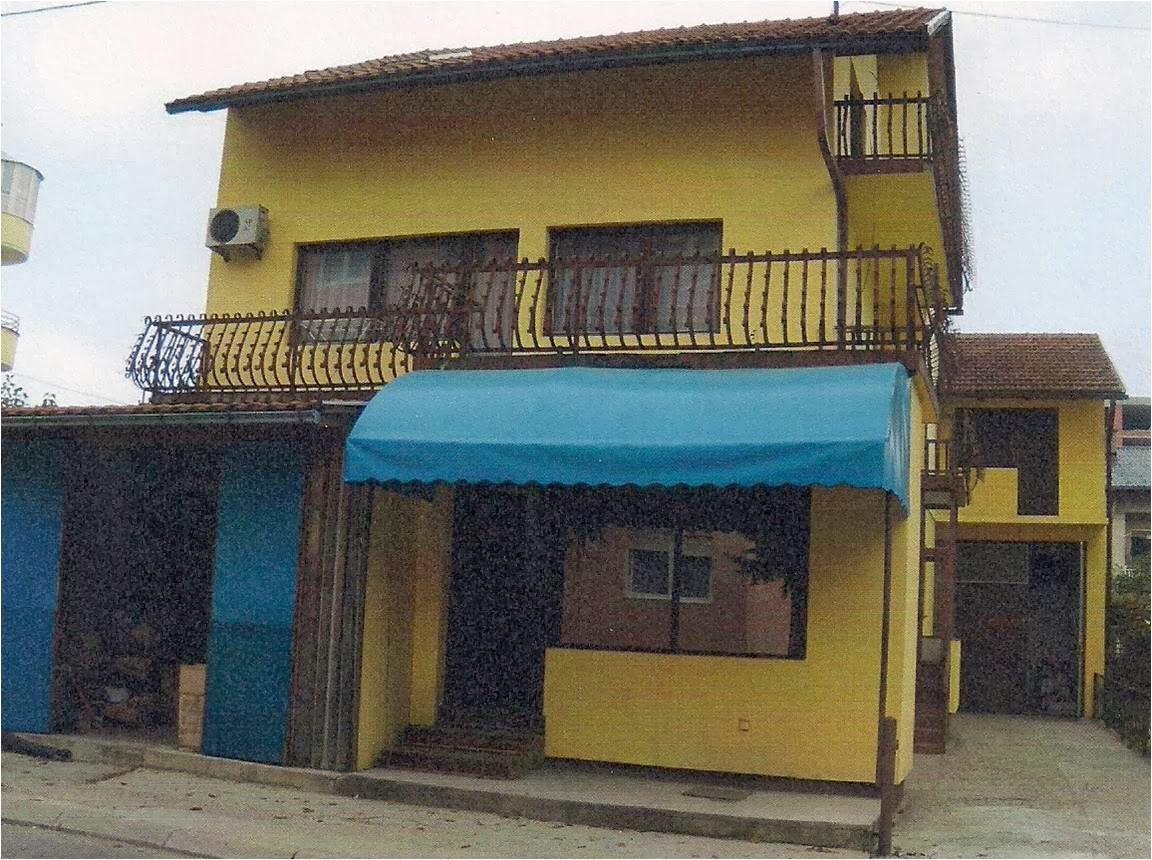 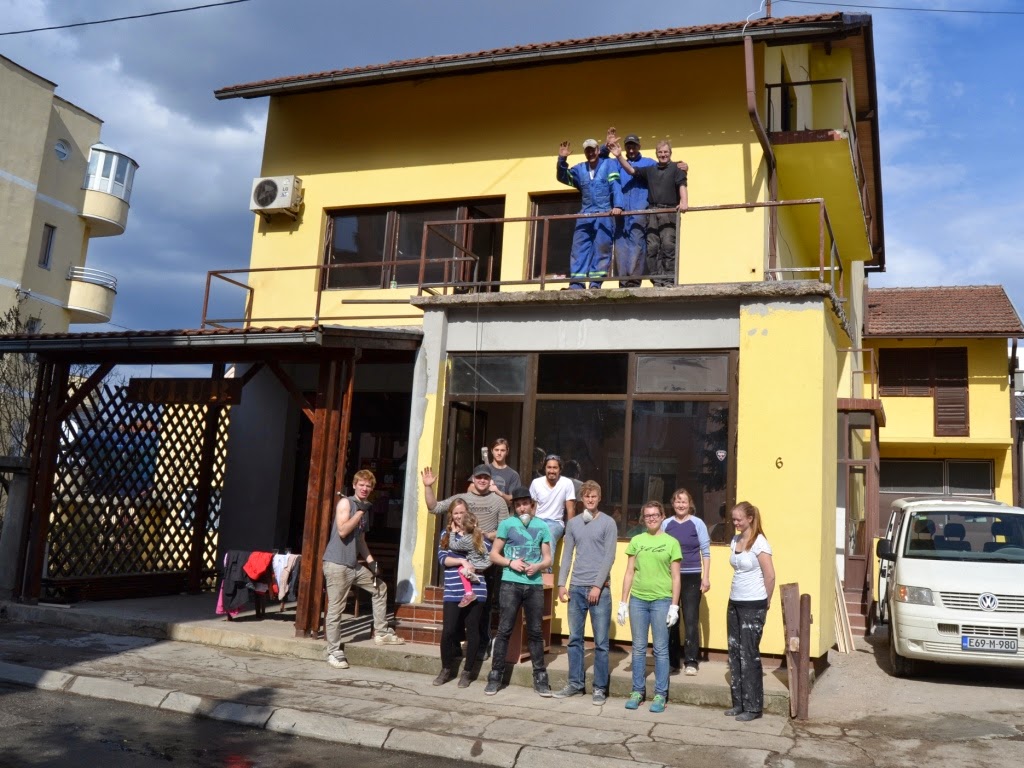 The Finnish team is made up of our ex-colleague, Miika and his family and friends - the Jarvellas visited last year (see here) and when they heard that we would have a new building committed to come and bring people to help work on it. Miika's dad and Sanna's parents and sister and another member of their church are all here and have been working really hard this week. My team has been doing their ministry and when they have time helping out with the clearing up and other fun stuff. Here are some pics: 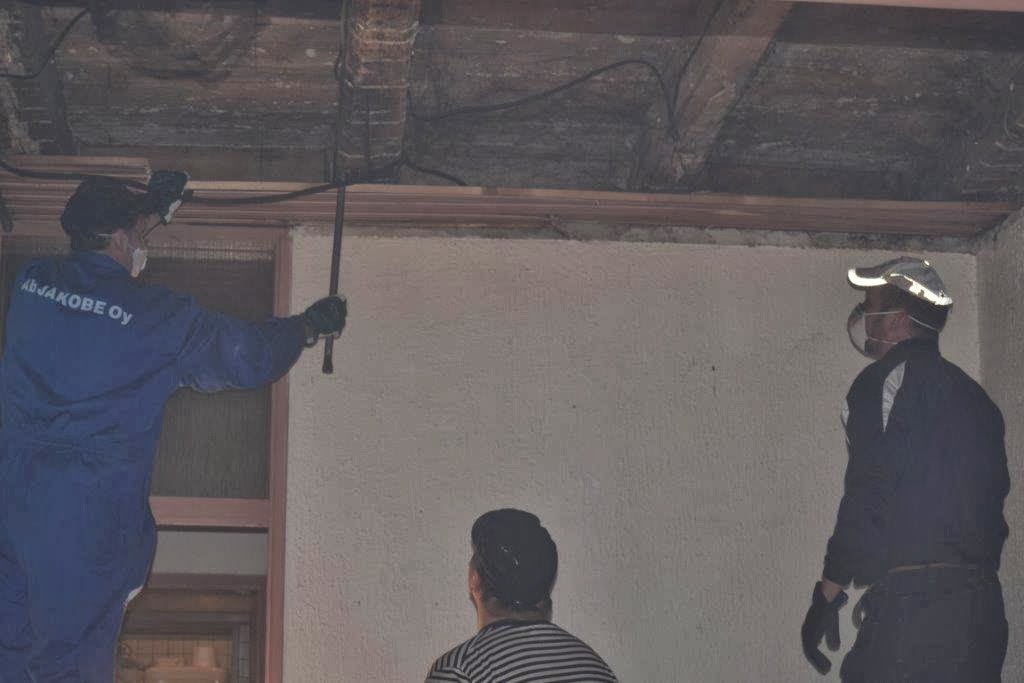 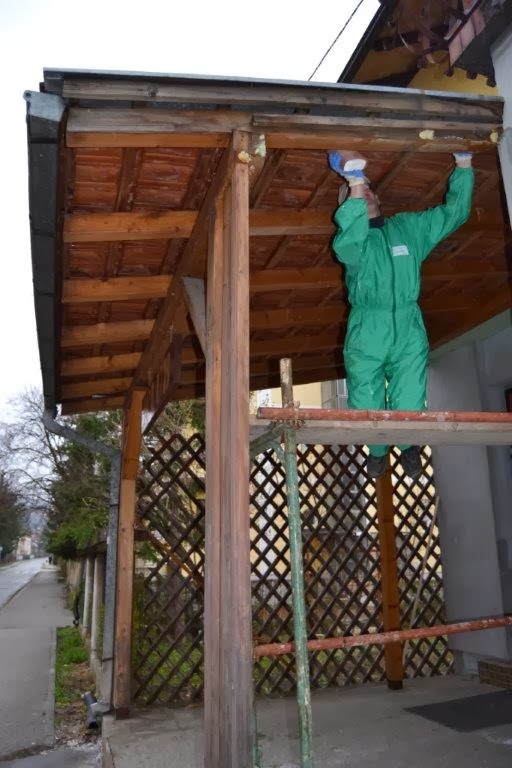 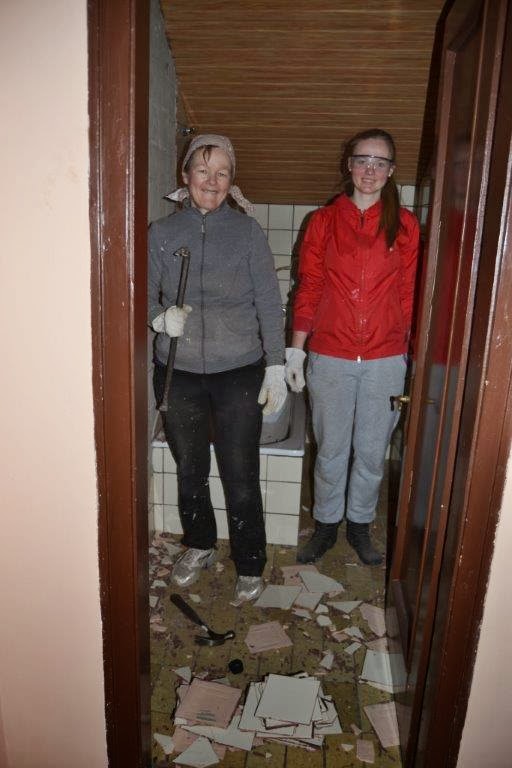 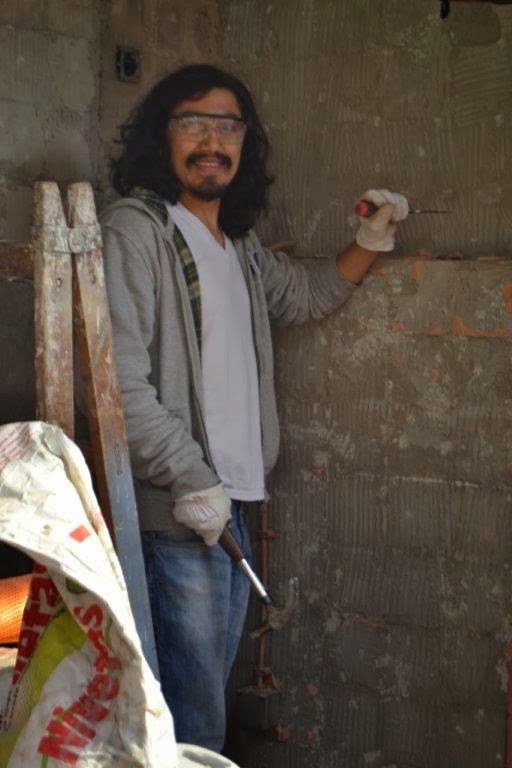 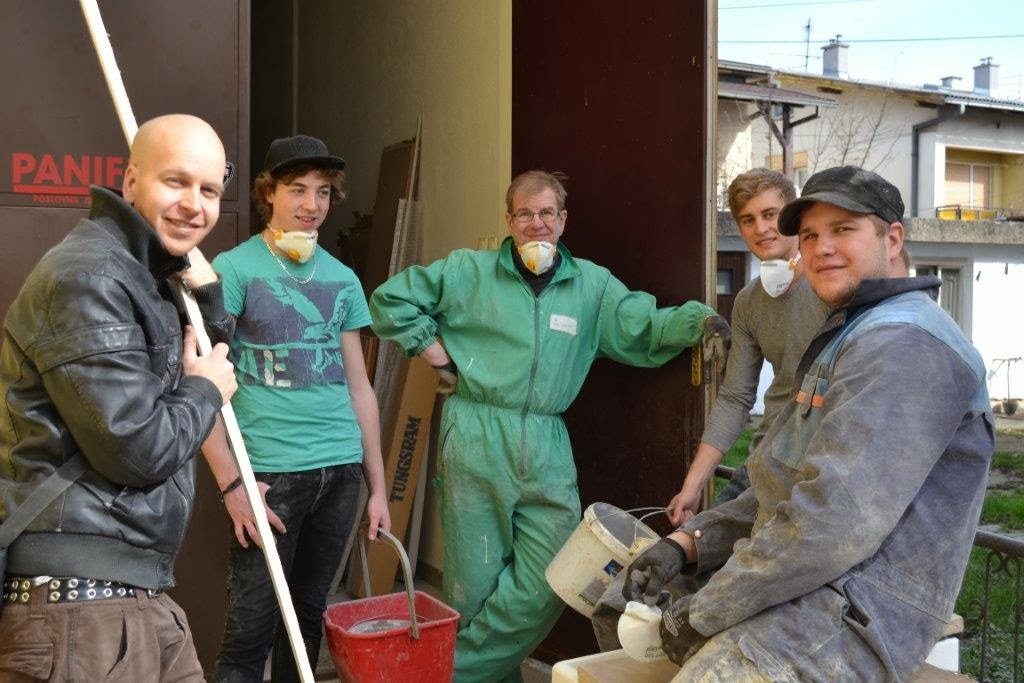 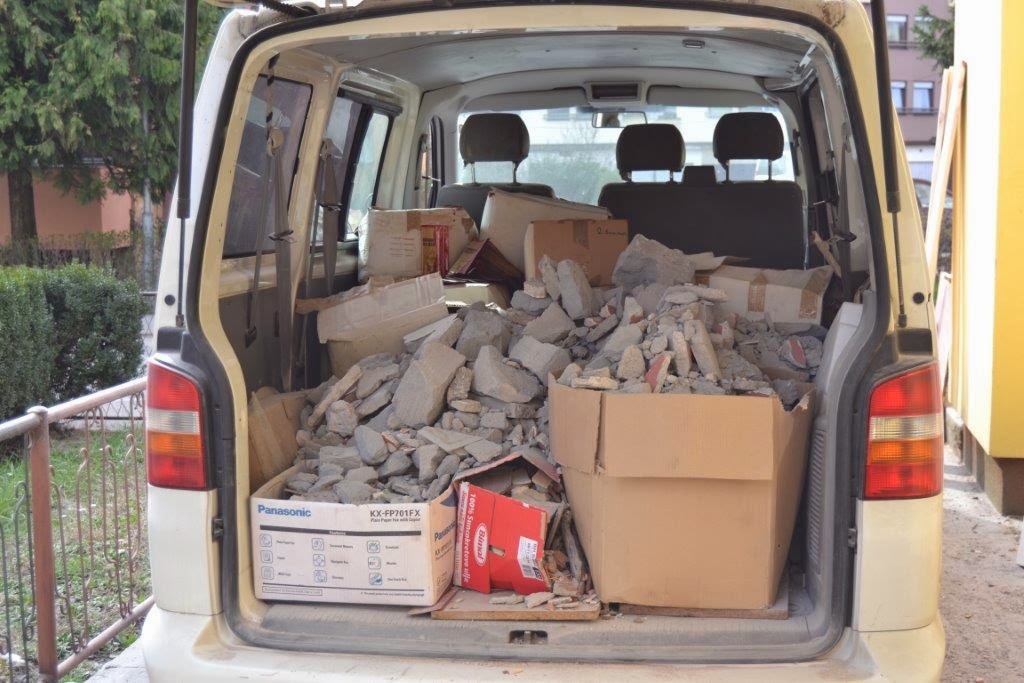 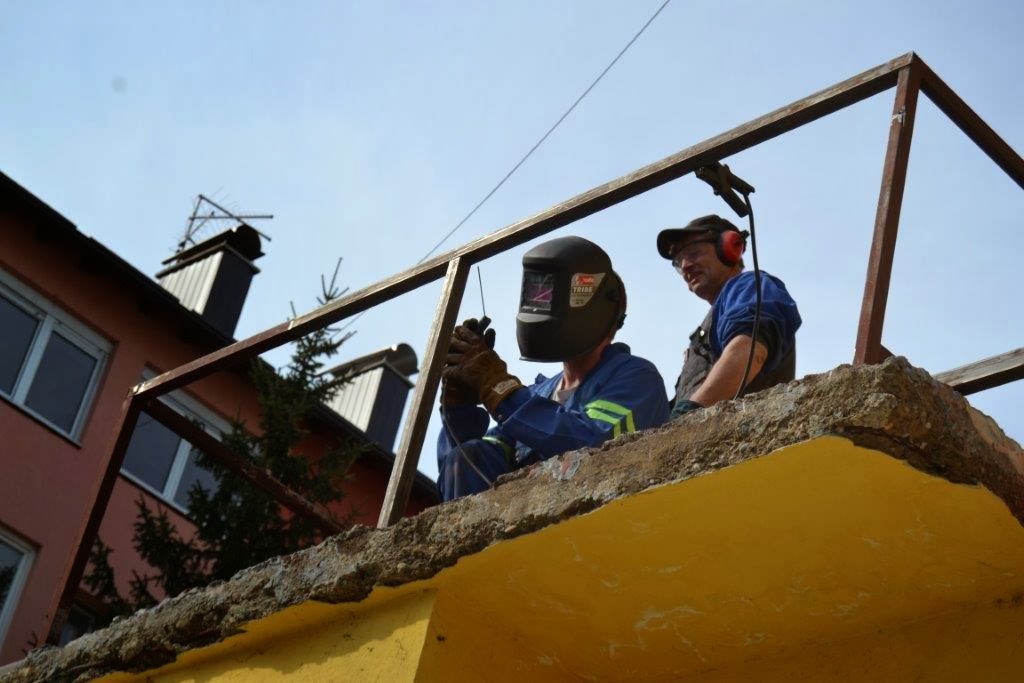 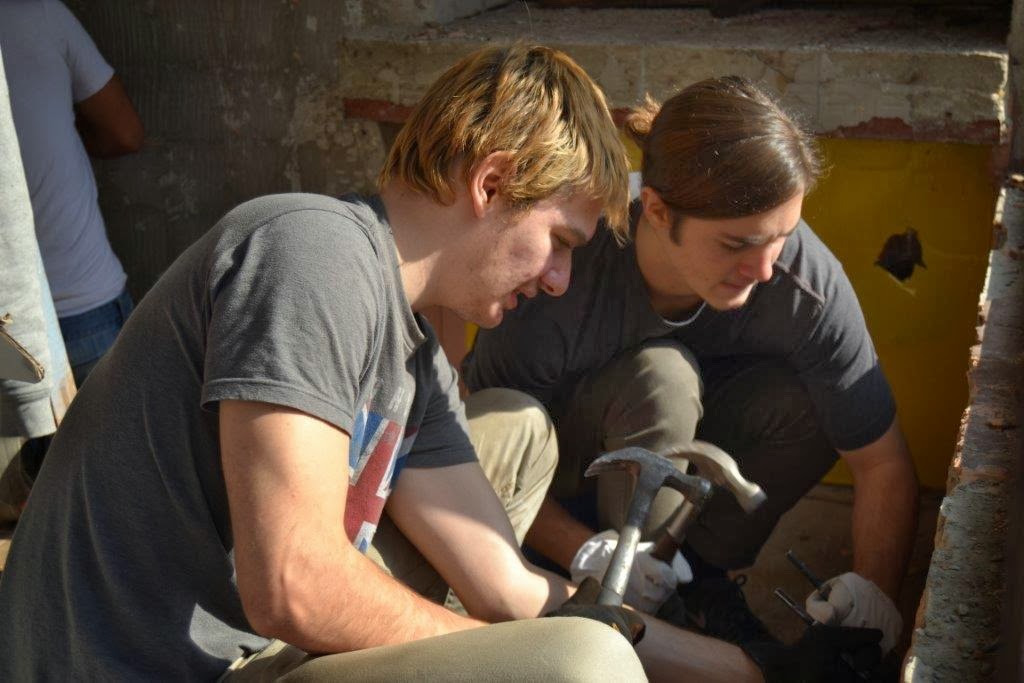 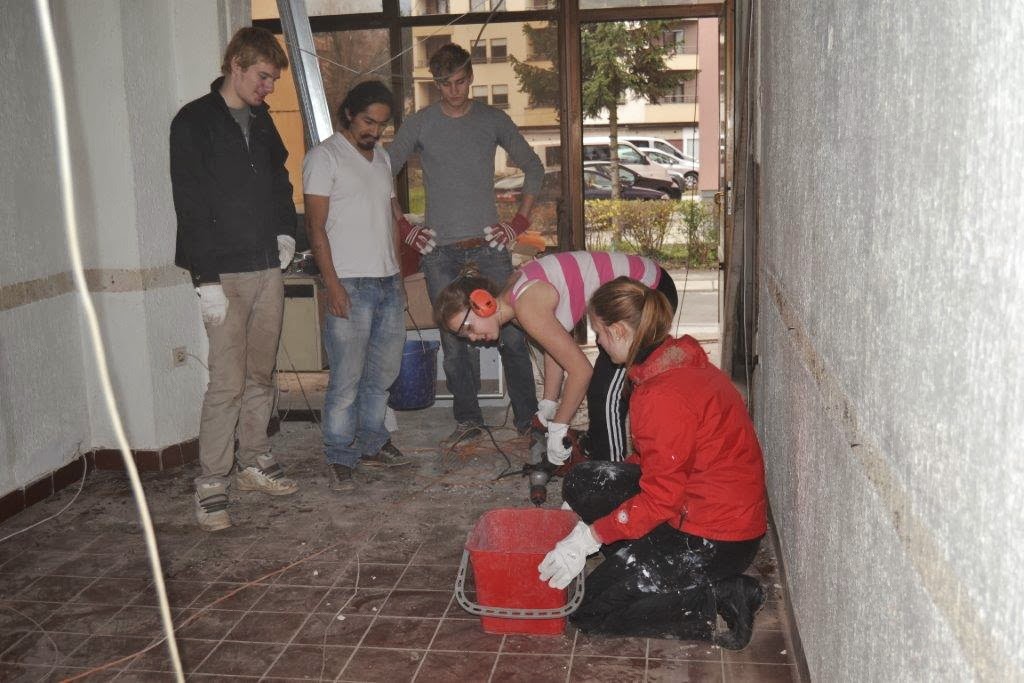 I think the last one is my favourite - that is Rami's daughter, Rebecca, with the sledgehammer, and I just love the way the guys are looking on :)

EKC Ihtus has continued to function despite being a building site, and so clearing up the mess and dust has been part of my job description this week :) But it is all worthwhile if it moves things along in our new building!! It is already a lot different from when we moved in, and it so great to see how things are moving along this week with both teams working hard on it!
Posted by beeinbosnia at 8:41 am No comments:

More happenings with the "French" team...

Today we went to the Children's Home to play with the kids and had a great time... the team mostly used the international language of football to interact with the kids, and are so popular they were asking when we were coming back, which is always a good thing!

Of course I didn't take a camera, and didn't get any pictures, so you will have to make do with the pictures from last night's International Cultural Night - we also had a great time with the more than 40 people who squished into our new place: 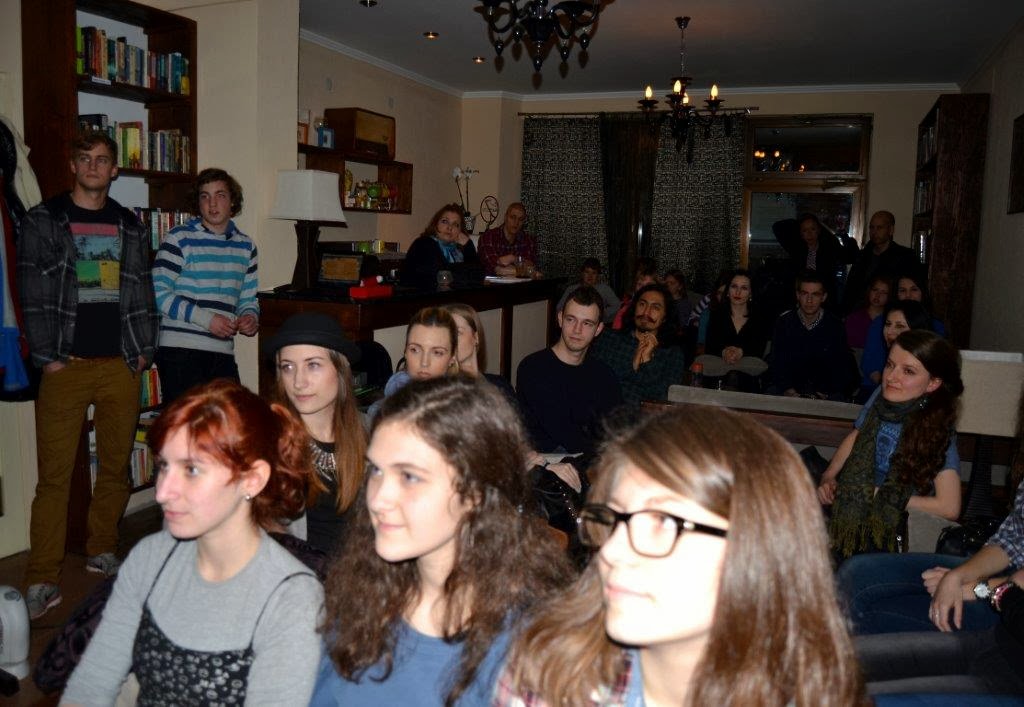 It started with some fun presentations about each of the team's places of origin - the 3 Americans are from Ohio, Texas and California, so it is quite representative of the USA's different regions!  And then we also learnt more about Canada, Germany and Columbia as well - the team did a really good job of keeping it light and interesting, and I even learnt a few things I didn't know before! 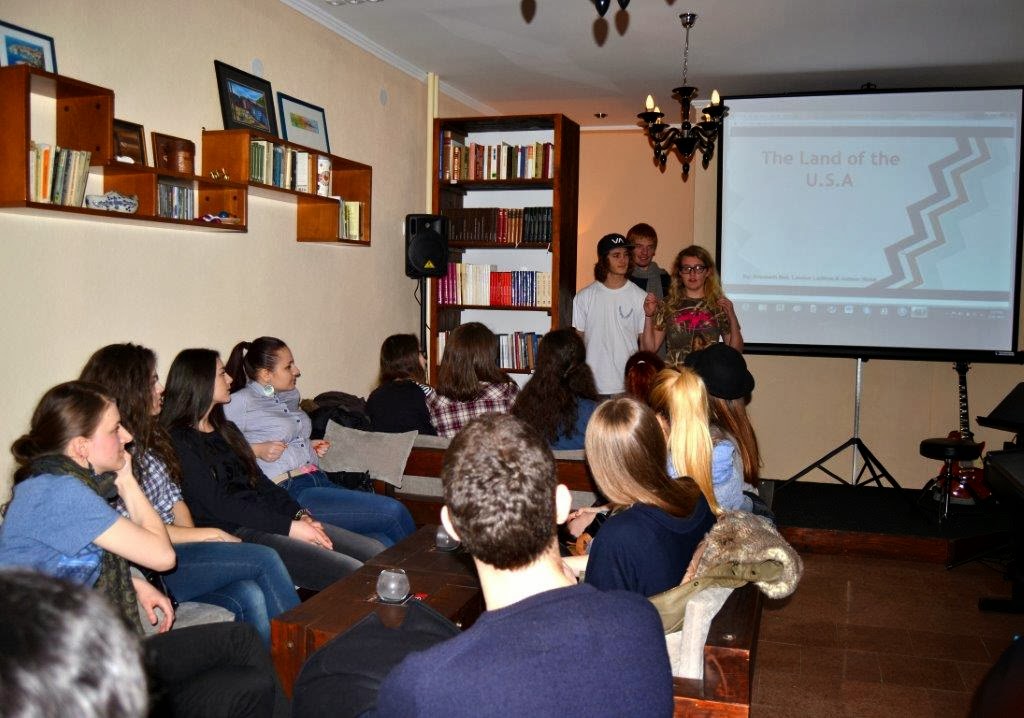 Our volunteer Natasa (second from right) came with her two roommates and a neighbour, and it seems as if they had a good time, as did pretty much everyone who came :) 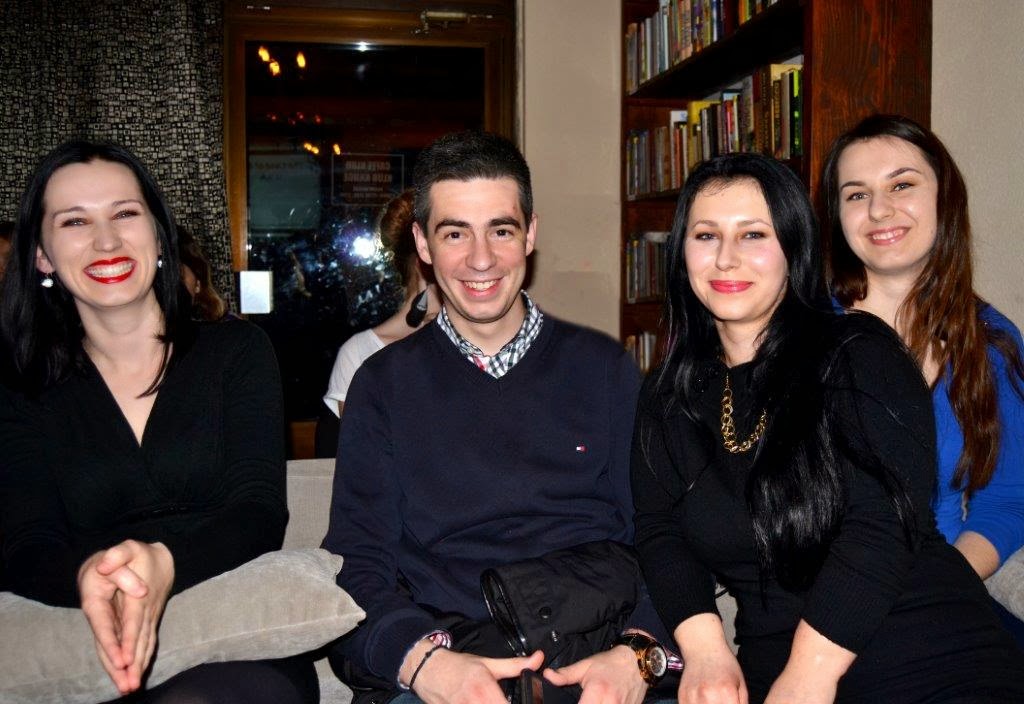 Then it was time to head upstairs and enjoy some of the lovely food prepared by the team: (and I helped out a bit with the brownies, because their oven is tiny!) 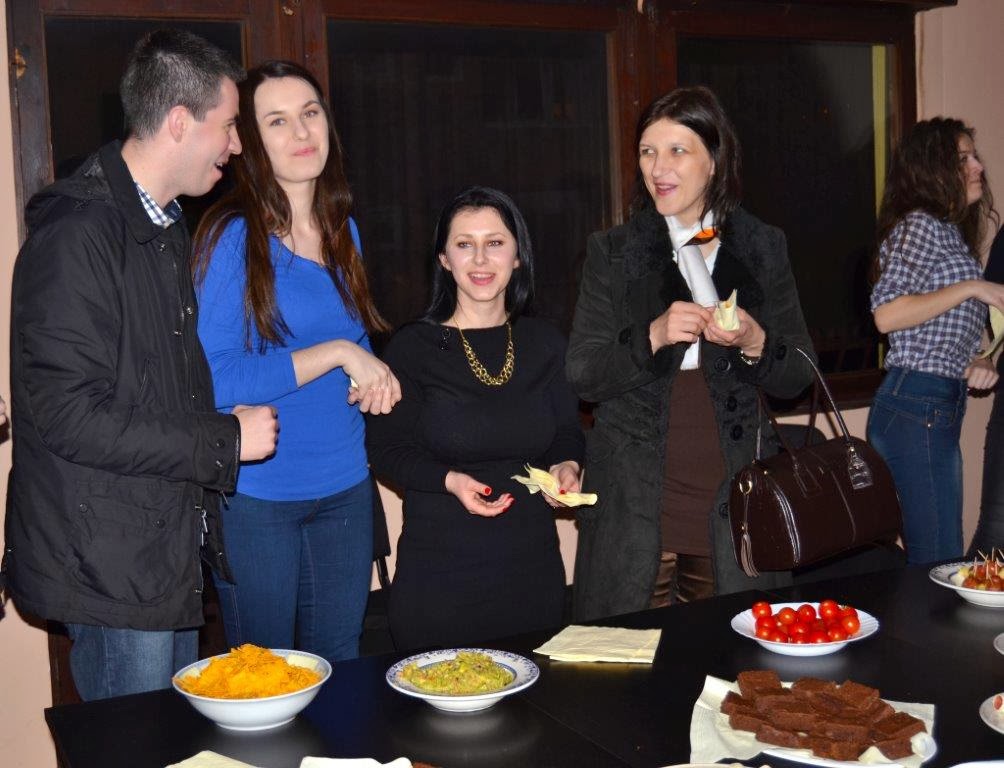 Then most people stayed to hang out with the team until late :) 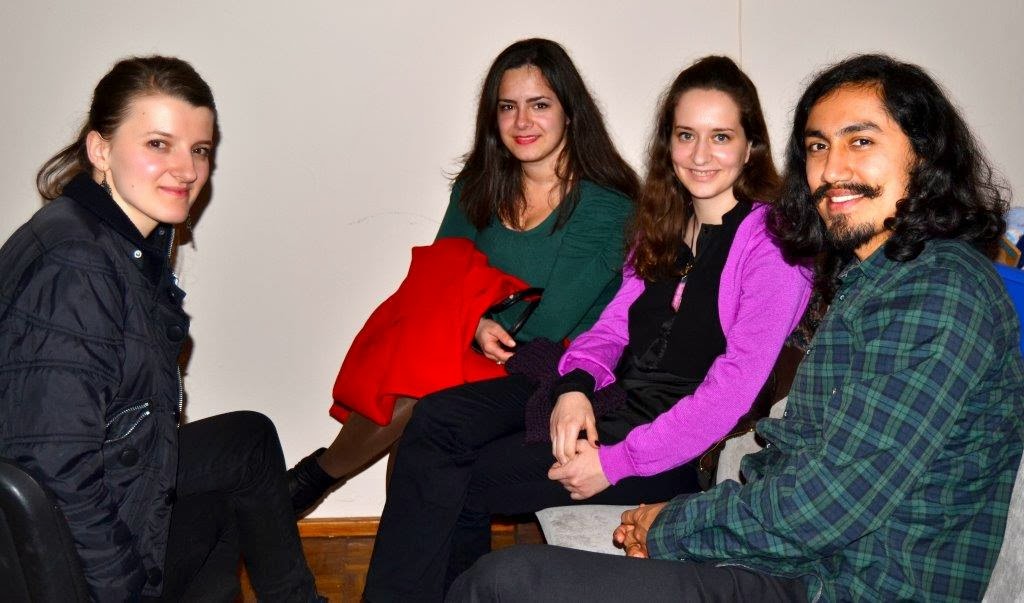 It was a great evening, and for the first in our new place went off really well! We have been doing a lot of other things as well, but these are the highlights from the last two days :) Hope you enjoyed the catchup!
Posted by beeinbosnia at 8:13 pm No comments:

Since I got back from South Africa in January, things have been a bit of a blur... we have been working hard to get everything ready in our new building! Yes, the Protestant Church "Hriscanska Zajednica" has bought their own wonderful, huge, big building, about 800m from downtown Banja Luka. It has been a long time coming, as the donors were willing to give us the money in 2012, but we spent 2013 jumping through various hoops to get it (and all that time the house that we found wasn't sold! Yay!)

The Education Culture Centre "Ihtus" has moved into the new building as the rent in the old place was getting too steep and so the first phase was to get things ready for that to be able to open in the new place. My colleagues were working hard even while I was in South Africa, but it really was a lot of work, but the place looks fantastic now. We had the "official" opening on Wednesday: with a band and lots of good people, it was fun! Here you can get an idea of what the new place looks like: 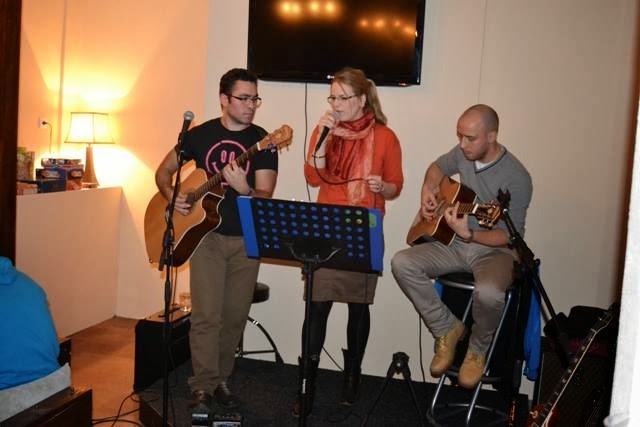 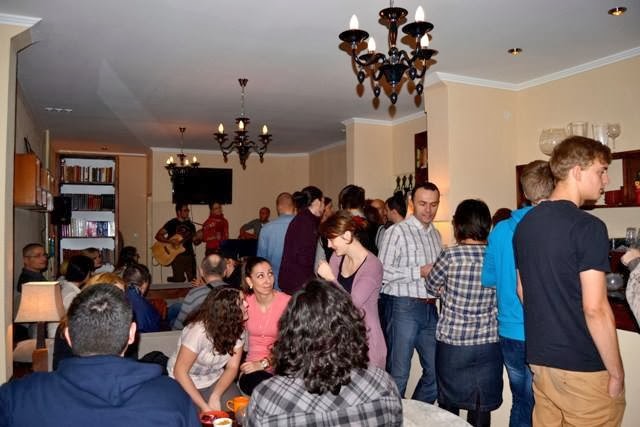 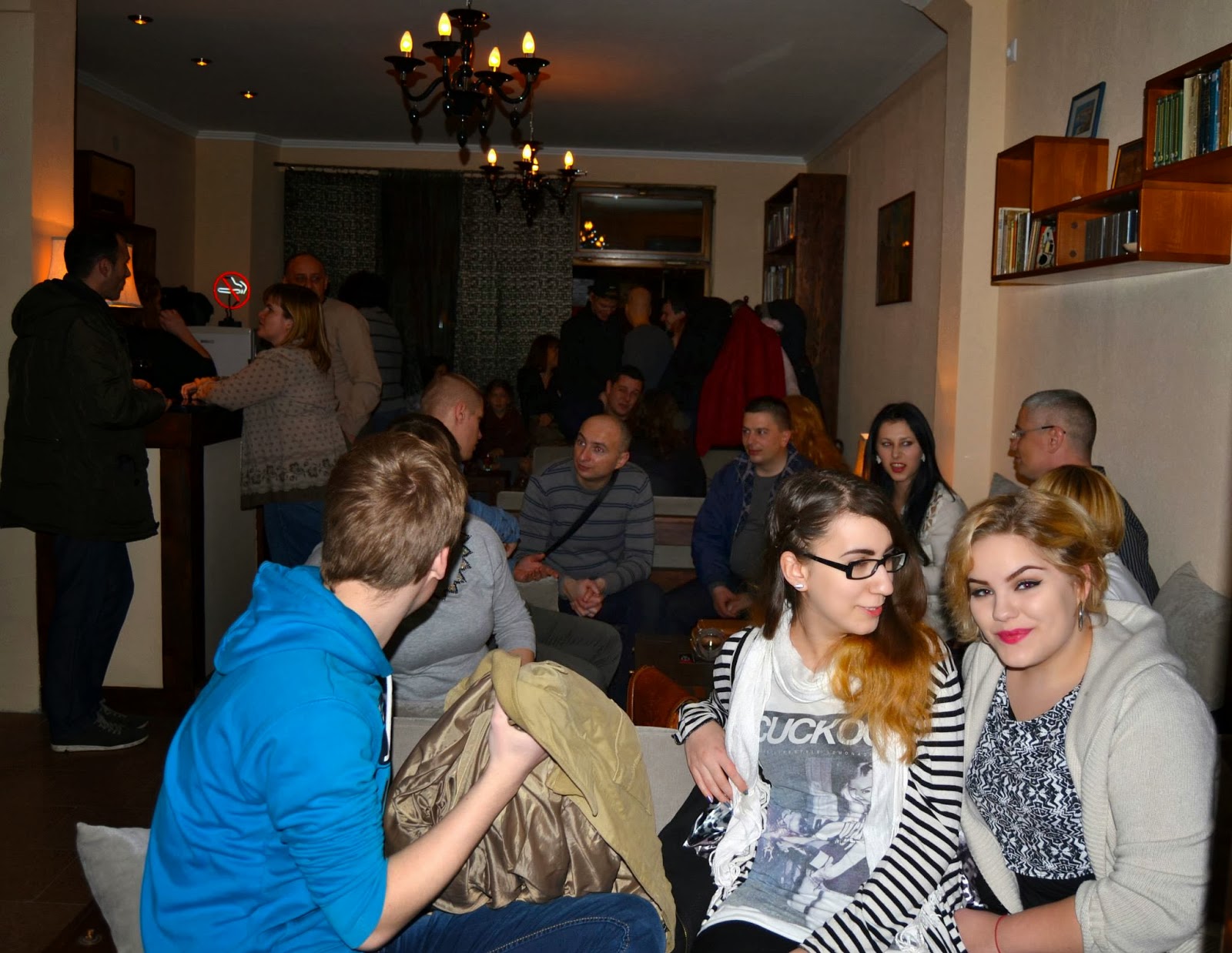 The second phase was to get things ready for the team who arrived on Monday - they are staying in the building, and we managed to get most things sorted out before they arrived, despite the fact that the old owner only moved out completely on Sunday (and the team are staying in the part of the building where she lived!) so Monday was beyond hectic trying to get things sorted!

The team has been helping with advertising and getting things sorted out in the building and last night we had our first English class with them, in the new classroom, which is now upstairs in the building. They are great fun and we had a good time in the class. I only had my phone, so the pictures aren't the greatest...but you get the idea... 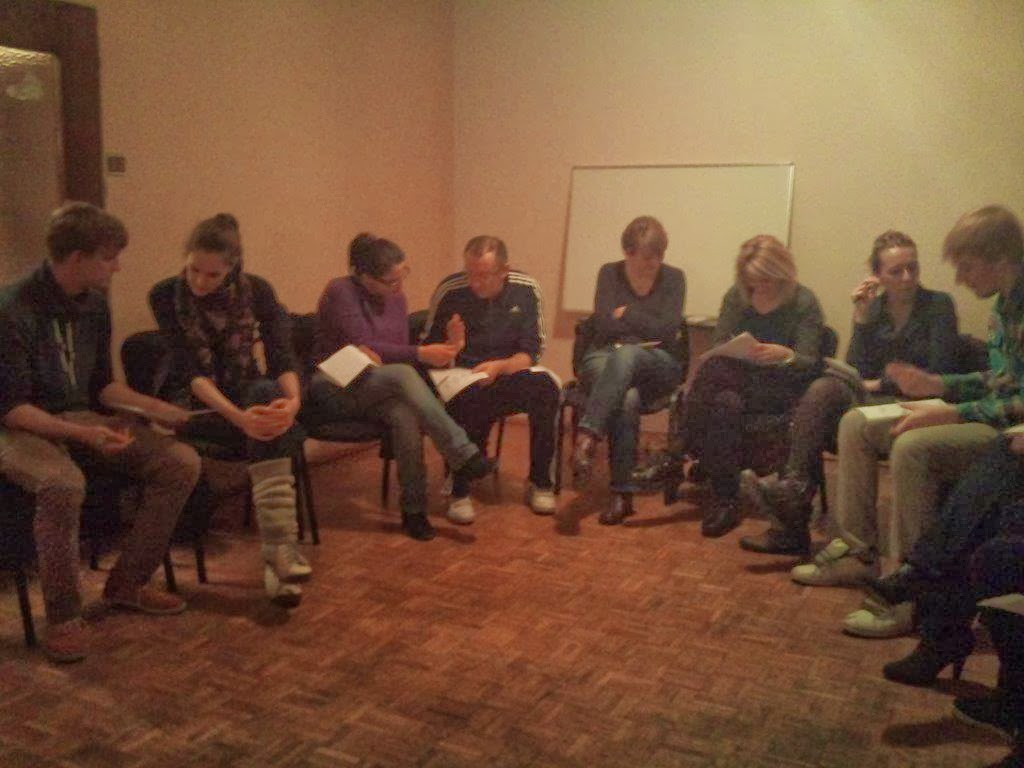 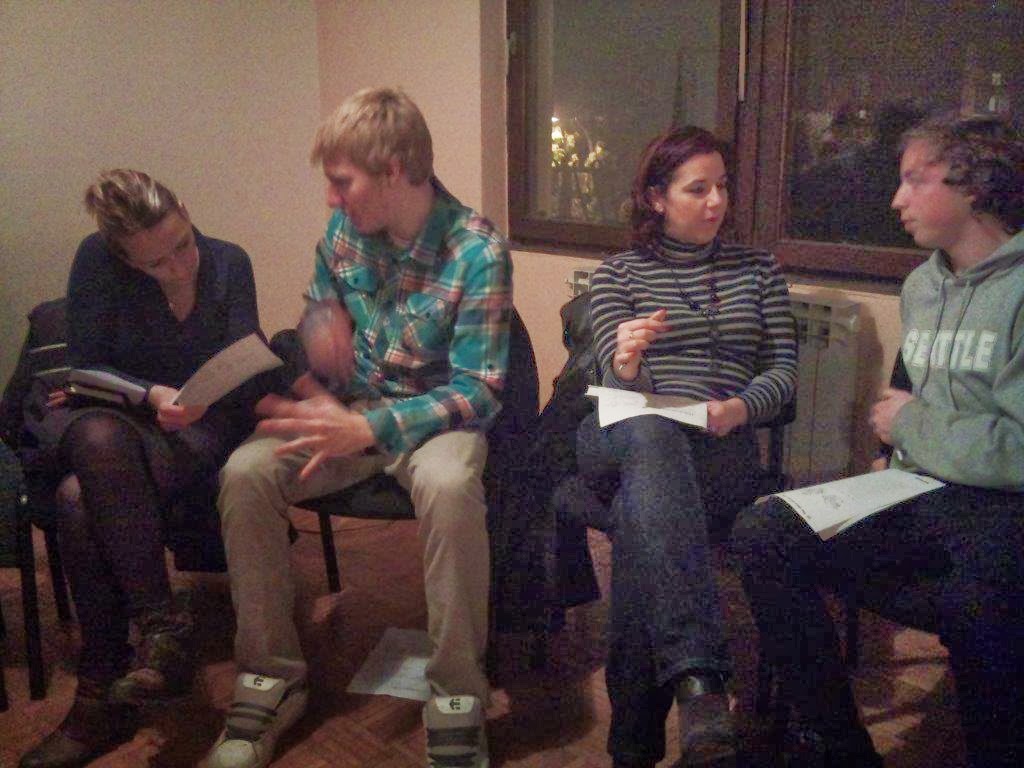 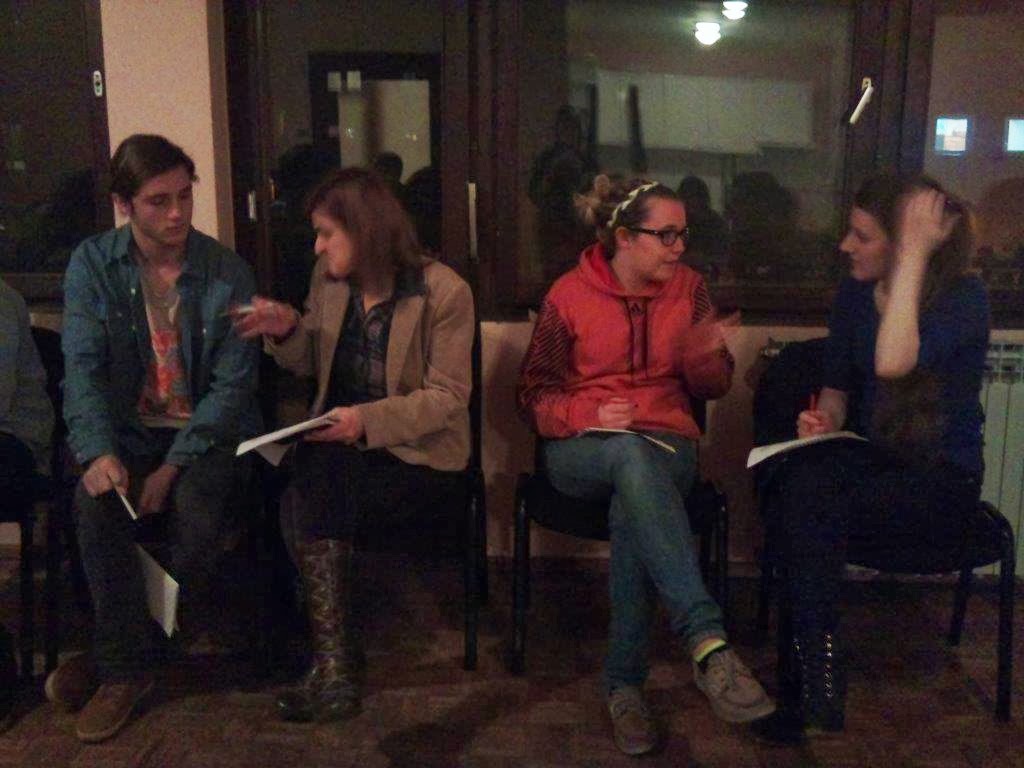 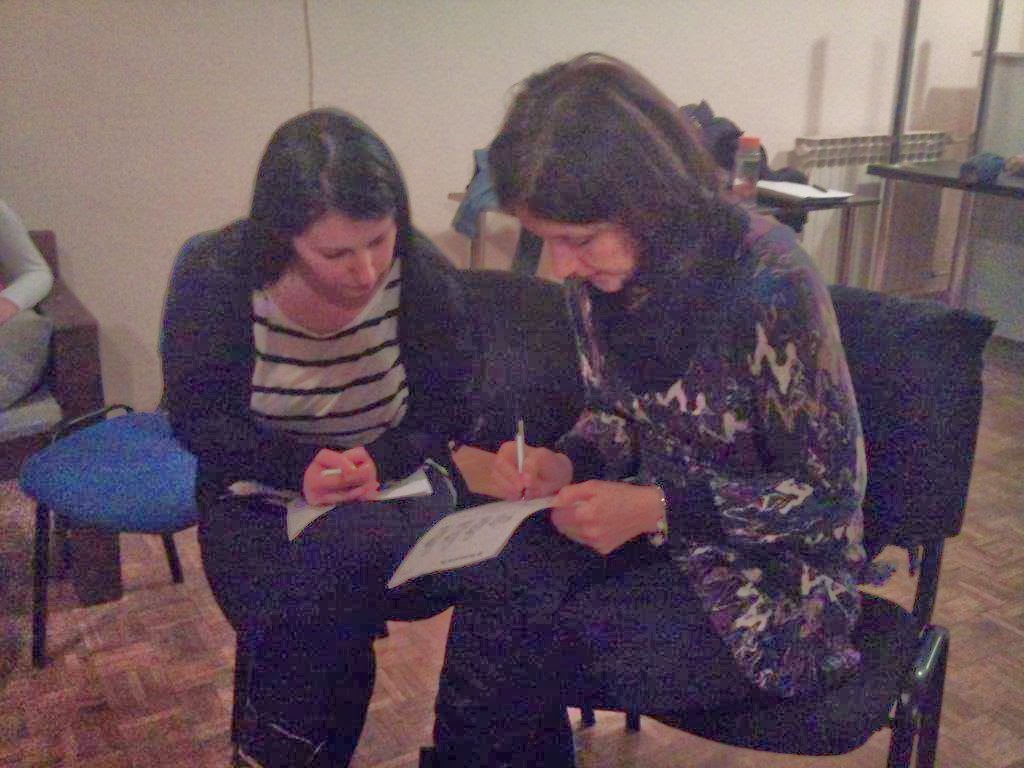 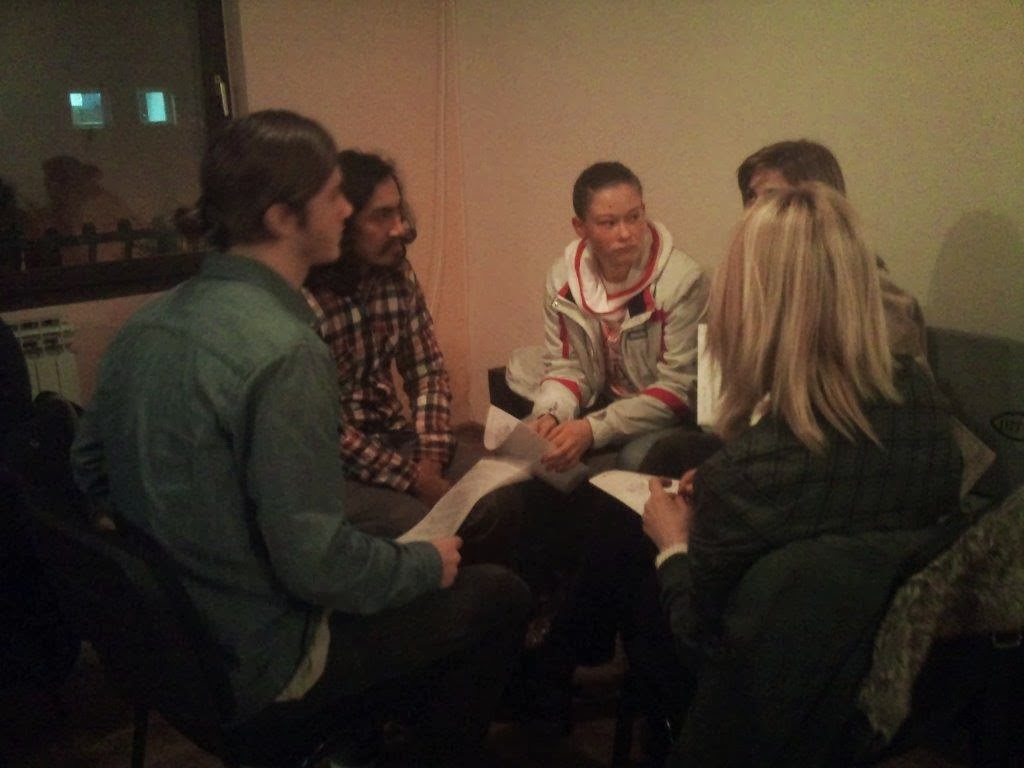 They were in Sarajevo helping there for a month before coming here and will go back for another week after being here. They are from Canada, Columbia, Germany and America and all under 24! One of them is missing in the photo below which was taken in Sarajevo when they were helping give out Samaritan's Purse Christmas boxes for Operation Christmas Child, (but I don't have another pic of them, so this will have to do) 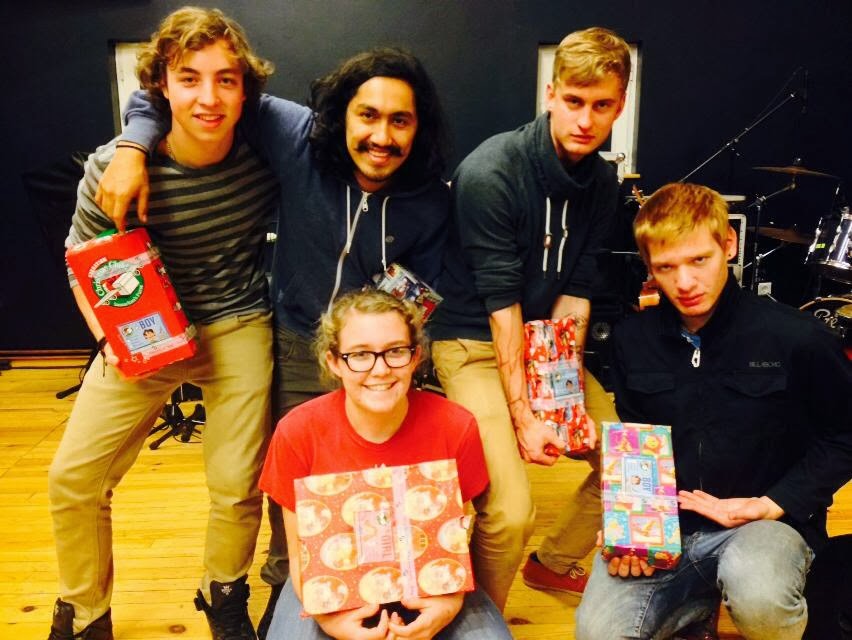 They are super sweet - and it has been fun having them so far. The first night they were here they played hide and go seek in the house and as there are 3 levels to choose from, they certainly have a lot of places to hide in... it is amazing what you will do for fun when you don't have internet :) Hopefully we will get it for them soon, as they are going through withdrawal... They will be here for another two weeks and I look forward to more fun times with them!

I will get more pictures of the house (and the team) when I get a chance...
Posted by beeinbosnia at 9:54 am 4 comments: