My brother arrived (from Canada) at the beginning of March with his 3 kids (he and his wife, Robin, are on the extreme left and his kids are the ones on the front left  - Hope, 10 months, Andrew, 6 and Luke, 8) and we have been having a LOT of wonderful family times... The below photo was taken on what the boys are now calling the "Family Tree day" as we got together with my late Dad's sister and two cousins and some of their offspring... the photo below was taken after some of my cousins had already left: we had a great day! 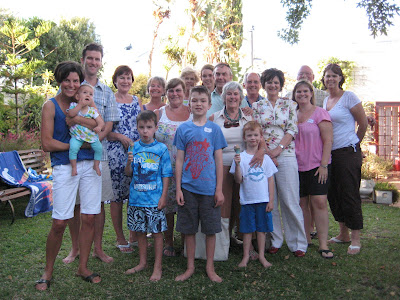 March has thus been marked by my brother's visit and as he came along with his (wonderful!) in-laws and also (a lovely) cousin of his wife's... we started calling it the "Canadian invasion" :) I can handle this kind of fun invasion! It has been BUSY, but also a lot of FUN!

Tomorrow we expect the arrival of my sister and her family so we will all be together in South Africa with all the kids for the first time EVER! So, looking forward to more family fun before I go back to Bosnia in just over a week!!
Posted by beeinbosnia at 12:51 pm No comments:

Booksneeze review: A Matter of Trust 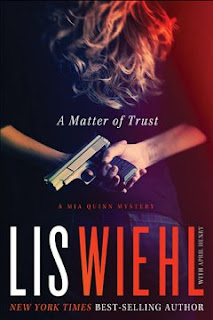 Lis Wiehl's "A Matter of Trust" starts with Mia, a recently widowed prosecutor, on the phone with her colleague and friend, when horrifically there is a sound of shot and then gurgling breathing sounds of someone badly injured. Mia  rushes over to her friend's where she finds the friend has been murder. This case is remarkably similar to another prosecutor who was killed 5 years ago. Assigned to be the prosecutor on the case along with handsome detective, Charlie, Mia is faced not just with her friend's death, but also many issues in her family as well.

As a newly single parent, dealing with debts that her husband left behind, Mia is also struggling to balance family and work. While she is busy investigating, Gabe, her 14 year-old son is involved in a "flash mob" at a local supermarket where the teenagers raid and loot, but are caught on camera. She also has to deal with the night terrors of her 4-year-old little girl Brooke. Having to balance the investigation and her home life makes Mia's character so realistic and makes for a more well-rounded thriller!

Last year in March, I was able to review three of Lis Wiehl's books and enjoyed all of them. The two that I really enjoyed were also written with April Henry, and so when I saw this one come up on booksneeze to review, I grabbed it.

And I wasn't disappointed... The story is not connected the the "Triple threat" series, but the style is very similar and I really enjoyed it. I would recommend this book to anyone wanting a good wholesome read which keeps you entertained and wanting to read more.

Disclosure of Material Connection: I received this book free from the publisher through the BookSneeze®.com <http://BookSneeze®.com> book review bloggers program. I was not required to write a positive review. The opinions I have expressed are my own.
Posted by beeinbosnia at 8:48 am No comments: