First of all, a disclaimer - I live in the Serb part of Bosnia, so the evenings I run reflect the "Serb" culture of Bosnia... and they eat a LOT of pork. (unlike the Muslims who do NOT). So, when we talking and praying about the evening, Scott, one of my support group said "we have to have pork if it is to be a genuine Bosnian evening". Because of the cost I had always gone vegetarian or with small amounts of meat: and focused more on the sweet deserts... but Scott was determined and so he organised and gave the meat and cooked it all as well... He is LEGEND!

He came at 3.30 to do it slowly. I kept him company at first, but when I went inside to finish the decorating, Nils and he had a great time doing all the cooking... 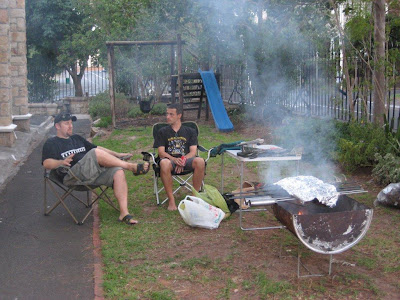 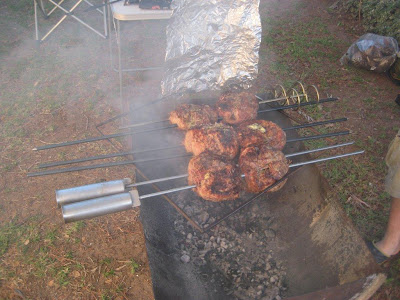 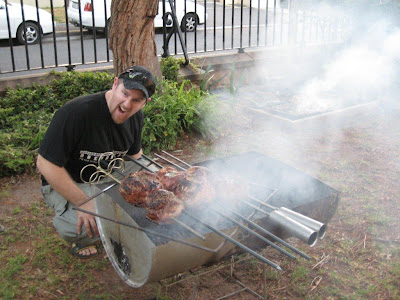 And it was DELICIOUS!!! We had also organised a whole lot of other food, and others donated their time to help make it (and some of them the ingredients as well!) so we had an amazing amount of food, and everyone managed to eat well. I had a great team in the kitchen and they plated up the food for everyone: over 70 people!! 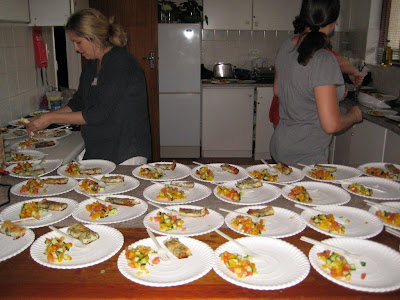 This meant I could concentrate on hanging out with the people who had come to enjoy the food, but also see me! So that was great! Here I am doing my main job of the evening... mingle mingle mingle! 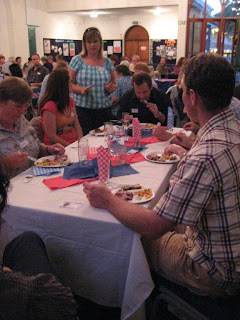 Here I am with Yolande, her husband, Jono, their little girl Talya and our mutual friend Leana: This is Talya's second Bosnian evening - she was with us in 2011 and Yolande's third... she took the photos in 2009. This is actually the 7th one that I have run, and they have all been fantastic, but somehow this one was the best one yet! 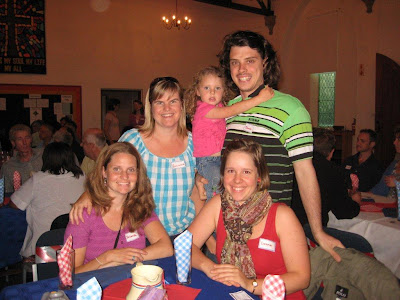 This time there were actually 4 people from the former-Yugoslavia. Misha and his wife Suzana (here with my friend Alexa) are from Serbia, but have been living in South Africa for 20 years. They brought traditional Bosnian/Serbian beans which were so fantastic that my cousin commented "who knew beans could taste so good?"! 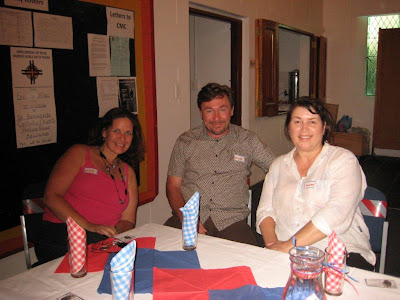 And there were also 2 Bosnians. One, Danijel, I met in Banja Luka before he came to South Africa to marry Carolyn (below with Danijel and her mom Evelyn). Danijel brought his friend, Milan (below right) who is also married to a South African. They also brought food along, which although it wasn't Bosnian, showed that they are believers in the Bosnian tradition "never go anywhere empty-handed"! 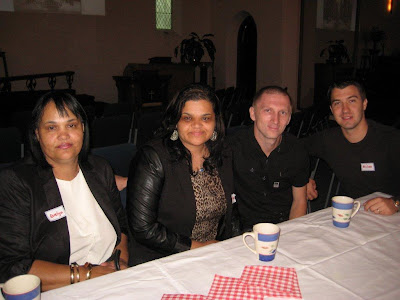 As I said, there was lots of food: the awesome pork, sopska salad, spinach "pita" (pie) and the beans for dinner - pictured below. And we also had desert of "bajadera" (fridge cake from peanuts) and "sape" (pecan nut shortbread)... yummy! 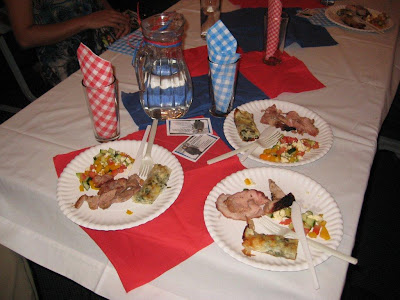 Keren giving out even MORE food... :) we all definitely ate really well! 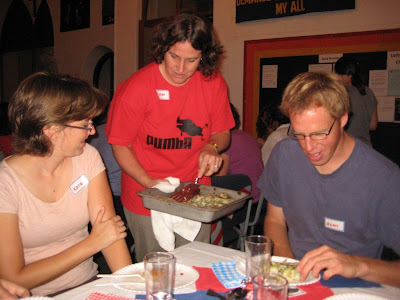 I then did a presentation of what I am doing in Bosnia - which was followed by a quiz. Now, I cleverly told everyone that some of the questions on the quiz were in the presentation, so everyone was listening very hard... genius! The quiz was great fun and Nils did a good job of being the quiz master! Below, Christina shows off her prize: Bosnian slipper socks and a voucher for one homecooked Bosnian meal of her choice (which is redeemable in Bosnia... so they have to come visit first :) 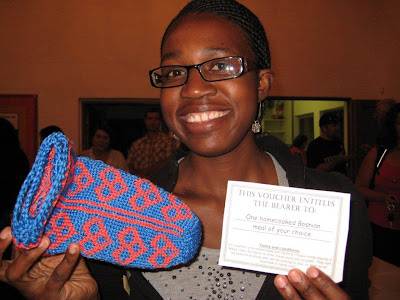 We ended off the evening with a time of prayer for Bosnia...and for what I am doing there. 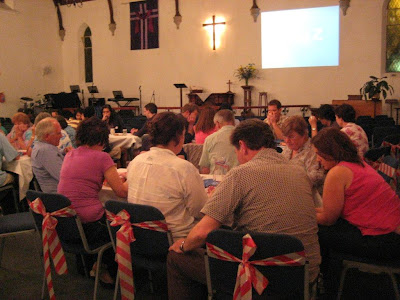 I have put a lot more photos on facebook and you can see them (even if you are not on facebook) by clicking here.

A BIG thank-you to all those who made this night happen...
I couldn't have done it without you!!
Posted by beeinbosnia at 2:34 pm 3 comments: 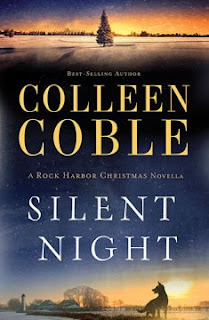 I really enjoyed Colleen Coble's Tidewater Inn so I was happy to read this short novella in time for Christmas. The main characters of Silent Night, Bree and her search-and-rescue dog Samson, also made a cameo in Tidewater Inn, and are featured in the Rock Harbor Series.

The story starts just before Christmas in the snowy wonderland of Rock Harbor on Lake Superior's Northern shore. Bree and her husband Kade are mourning their loss due to miscarriage, but looking forward to spending Christmas with their joint family. Kade's sister, Lauri, arrives unexpectedly and it eventually seems to be embroiled in something shady...

Bree and Samson get called out to look for a parachutist who has gone missing - and it seems that Lauri knows more about him than she is letting on. Although the parachutist is found dead, the trail also points to the his involvement in an unsolved kidnapping of a young student.

I enjoyed this short novel, especially as it was themed for Christmas (and I was reading it around that time!) and as in her books, keeps you in suspense wanting to read more, and leaves you feeling good at the end of the book. I haven't read any of the Rock Harbor series, but I do think I would enjoy them.

Disclosure of Material Connection: I received this book free from the publisher through the BookSneeze®.com <http://BookSneeze®.com> book review bloggers program. I was not required to write a positive review. The opinions I have expressed are my own.
Posted by beeinbosnia at 7:03 am No comments:

Sharing my story doesn't have to be hard work :)

It is not all holiday and free time while I am here, one of the things that I do is to share in my church and in the home groups about what I am doing in Bosnia. On Sunday I had the privilege to share the story of some of the people whom I have met in Bosnia and through that about what I do. It wasn't as great as the time I shared in Bosnian and had a (fake!) translator into English. She did such a great job that she was asked afterwards "how did you learn the language so quickly". People, she had a script! But I still think it went well on Sunday and people enjoyed it....

I have also been going to the various small groups and just sharing my story - accompanied by a really cool photobook which I made - and some biscuits/cookies that I had made called "sape" (which means literally 'paws': they are a wonderful version of shortbread from Bosnia!).

It hasn't all been work and no play... I was asked by my mom's group (who have adopted me as well) to come again and make cards with them. They send me a birthday card each year, and this year I got to make my own! Here are Debbie and I with our "same same, but different" cards: 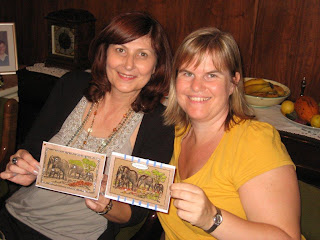 And then the whole group showing off their cards... lovely! 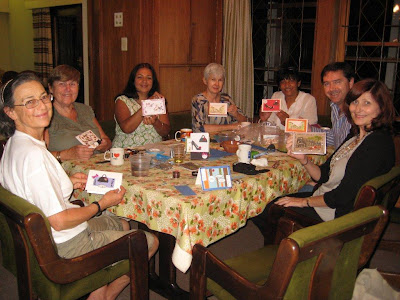 Then last night, the group that I have been part of for years (through many different variations) and attend when I am home joined up with another group so I could kill two birds with one stone so to speak... It was also more fun for both groups to spend time with each other - here we all are: 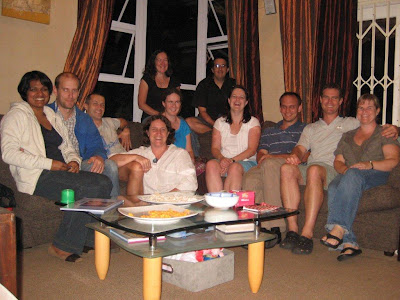 I look forward to the Bosnian Evening that will happen on the 21st of February at my church, Claremont Methodist. And this year I even have a former-Yugoslavian helping me with some of the food, so it will definitely be authentic!!
Posted by beeinbosnia at 12:06 pm No comments: