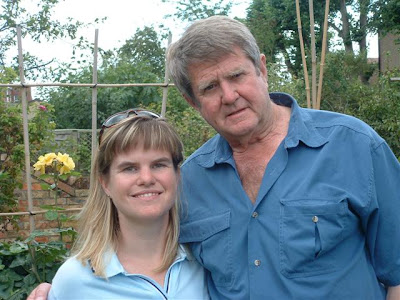 My dad passed away on Thursday the 9th of June at the age of 72 after a short illness, while my mom and aunt were by his side. He was already in a coma for a week before his death and the doctors fought a valiant fight against the pneumonia, but Dad has a condition called scleroderma which weakens the connecting tissues and many people with his condition die of lung problems.

Even though he was in a coma, the doctors still held out hope for a recovery and it wasn't until Wednesday that we were told he wouldn't make it, and that we needed to come asap. My brother (from Canada) and my sister (from England) will both arrive this morning, just too late to see him before he died. I will be getting on a plane later today and arrive tomorrow afternoon. At least we will all be there to help my mom through the funeral and the aftermath of his passing.

Born in Cape Town in 1938, Dad didn't have an easy life. His father died just after he married my mom and so my gran lived with them. He often said that his dad left him a watch, a raincoat, and a mother to look after and nothing more. Determined not to do the same to his children, he gave us all a University Education and bought two houses so that we would have a bigger inheritance: the second house is already in a trust for us children.

It has been amazing in the past few days as I have let people know that he is so ill, how many people have replied with "Oh I remember when..." about my dad. He was the kind of dad other people wanted for their dad... he was a really fun guy to have around. And he loved to entertain people with his stories and jokes and amongst other things, plastic bottle rockets!

He was always creating: he made us girls a "Wendy House" (playhouse) when we were small, and another one, complete with appliances and a slide into the pool for his grandchildren. He made us kids a pool table and a air-hockey table when were all teenagers. He got the idea for the air-hockey table when were on holiday in Durban as he saw how much we liked it. Despite having to drill over 5000 holes and it taking forever, he never gave up, and used over 11 drill bits to complete the job.

Even now he was always creating - you know those funny emails that you get sometimes with fun pictures and captions? Ever wondered what kind of person makes them? Well, one of them was my dad. He enjoyed entertaining people so much that when he couldn't make stuff physically anymore, he used his creativity to create those funny emails.

He loved Cape Town and loved showing people around the city. He had his own tour route which he would do with people - many of my foreign friends remember him for this reason.

Even despite some of the problems in our relationship over the years: especially when he couldn't understand how I would "waste" my University training and wanted me to get a "real job", I had a really great time with him this last time I was home. He seemed to have made peace with my life choice and was happy that I was happy. It was also great that he got to meet Ljilja, my roommate, when she came to visit in January, and see part of my world here.

Dad, I will miss you so much. It is a very different world without you in it. I wish I could have hugged you just one more time, but instead I will be placing this inadequate tribute to you and your life on my blog as a virtual hug from me to you. Rest in Peace, Dad. I love you. Goodbye.
Posted by beeinbosnia at 5:51 pm 10 comments:

On Saturday, after playing with all of the younger kids at the orphanage, the team and I went bowling with 7 of the older boys. I didn't even know there was bowling in Banja Luka, until the team asked if they could go with the older kids...and I did a bit of investigation and found out about this place. It isn't the game I am used to, which is the American 10-pin, but instead is a game that is played primarily here in Europe with 9-pins and a smaller bowling ball. It was still really fun! This is what it looks like: 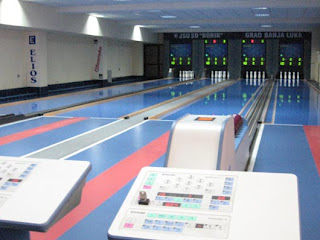 Here is the whole group afterwards: 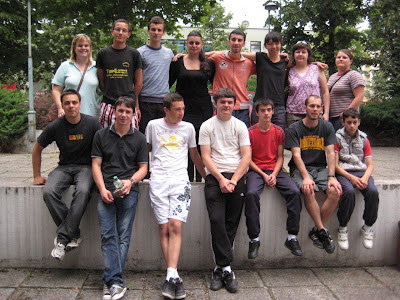 One of the kids that came with is one of my old-timers, Momir: He is now 13, but I got to know him when he was 9! Here he is showing us how it is done: 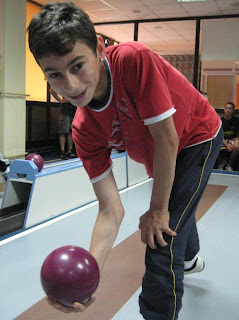 And here he is 3 years ago when we with the Dutch Go team at the orphanage in 2008: 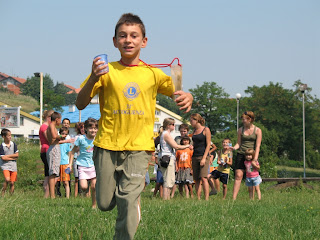 Still just as cute!!
Posted by beeinbosnia at 9:01 am No comments:

Fun week with the team...

It has been a good week with the team from YWAM Constanta. We have done a lot of different things... Some I have pictures of and others not so much. But here is a taster:

We went to a Roma ("gypsy") Village where we played with the kids and had a good time. The team did a drama and also talked to the people: Their language is originally Romanian and so they could understand a lot of what the Romanians were saying! It was really fun! 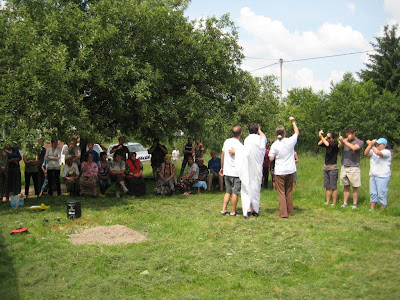 At the village, we also gave out some humanitarian aid, including some toys that we had: Here is little Lejla with her new Barney: Totally matches her outfit! 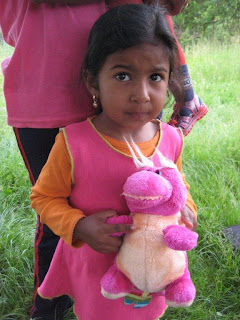 We also had a lot of fun at the English Class this week: one of the activities was the blindfold obstacle race: We who were blind folded had to listen for our partner's voice as they all directed at the same time: chaos but also good fun! 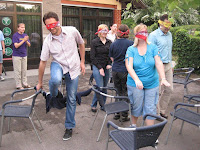 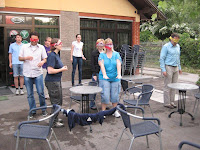 For the orphanage book club this week I read Max Lucado's "You are Special" in the local language while the team acted out the story... 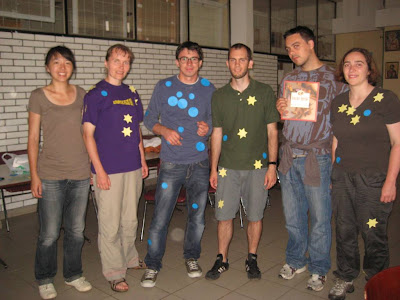 Afterwards I tried to take a decent photo with the 3 boys from the club, and even after trying over 10 times and eventually bribing them, I only got a decent one with two of them: Simo and David! But I love these kids anyway!! 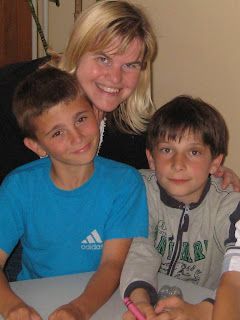 Posted by beeinbosnia at 8:59 am No comments: