As I mentioned in my last post, Ljilja's sister, Sladja, has been staying with us this last week while their aunt was in hospital for some tests (and everything is ok except for her thyroid, which is showing the signs of the same condition that I have -Hashimoto's thyroiditus). As the aunt was supposed to get out today, their uncle came back yesterday to sleep over and then take her back today. He brought his middle daughter (they have three), Saska, who is 3 1/2 and as cute as a button. Here is a great photo of the three "sisters" (here in Banja Luka they call cousins "sisters" as well):
And here is Saska pretending to sleep with our "promiscuous" bear (he sleeps with all our guests, so someone once said that makes him "promiscuous"! So that is now his name...This is actually model number two as the other one got shrunk in the wash...): 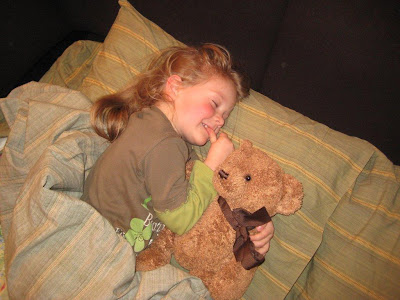 The uncle also brought his nephew, Marko (ie another cousin), and so the three of them were sleeping in the above bed last night. Saska has a cough and in the middle of the night she coughed so much that she threw up. The resulting ruckus even woke up my landlady upstairs, but I managed to sleep through it all!! (I also managed to sleep through the 3.6 earthquake that woke up all the rest of Banja Luka last week!).

Here is the happy family at Ihtus after the aunt got out of the hospital this afternoon:
Rada didn't get out early enough for them to make the 6 hour trip back to Bileci (which is near Trebinje where Ljilja is from), so Marko and Sladja are with us for one more night and Miroslav, Rada and little Saska will be staying with friends. It has been fun having the family, especially Sladjana, around and it will be very strange when they leave!
Posted by beeinbosnia at 10:30 pm No comments:

Many people ask me how long it took me to learn the language - and I always say "well, I am still learning!". Although I am fluent and able to do a lot in the language, there are so many nuances that I still find myself making a lot of mistakes. But the worst part is when I make a mistake repeatedly (unknowingly!) and no one corrects me:

Ljilja's sister is staying with us at the moment, while their aunt is here in Banja Luka in the hospital for some tests on her thyroid. Here they go into the hospital and do all the tests over a week to 10 days. I was telling people that she was here to do some "istrage". I told at least 3 people this. The FOURTH person was the only one brave enough to say that it isn't "istrage" (which is like a police investigation), but "pretraga"! Oh so close...

Over the weekend we "kidnapped" the aunt (who is younger than Ljilja as her uncle is only 3 years older than her) from the hospital during the day so she wouldn't be bored, and I told her about the "istage/pretrage" mistake. This prompted Ljilja to recall all of my other confusions of words, many I had forgotten. They say laughter is the best medicine, and Ljilja and her sister and aunt definitely got enough medicine at my expense!

I confused "preliv" (topping or sauce for icecream) and "proljev" (diarrhea)...I never wanted to ask for icecream sauce because of this... I couldn't remember the difference between "baksis" (tip for the waiter) and "baksuz" (unlucky person/bad luck), so I would leave the waiter "bad luck" and sometimes think that I was a "tip". And just yesterday I tried to say "patishpan" and it came out "pashtipan" (it is a kind of cake)... causing great hilarity!

Anyone who has learnt a new language in adulthood will know the joy and pain that comes along with getting something right, or getting something horribly wrong! I look at it this way: I get more right than I get wrong and in order to get it right sometimes I need to get it wrong... I will never forget "pretrage" for instance... but I wish that one of those first 3 people would have told me, so I could have learnt sooner!
Posted by beeinbosnia at 8:50 am No comments:

We started last night with our Advanced English Classes: It started smallish with 8 people, but many people tell me that they will come next week. We who made it, had a good time. We had discussions, games, role plays, the full gambit! The funny thing is that out of the 8 people, we had 2 Tanjas and 2 Alens!


I usually end off the class with some lateral thinking puzzles and riddles: Here is my favourite - see if you can get it! What is greater than God, more evil than the devil, the poor have it, the rich need it, and if you eat it you die?
Posted by beeinbosnia at 5:41 pm 1 comment:

We went last night to start up the Club at the Children's Home after an almost two month break. The volunteers went a couple of times while I have been gone, but then the Children's Home didn't want outsiders coming in during the flu season for fear of the kids getting swine flu. It was so great to see the kids again and they were all so happy to see us as well. We had a great group - 10 kids and 9 volunteers: so almost one-on-one attention for each child, which is something they crave. Before having a chance to share about the book that they read, each of the children must fill out a form showing what book they read and telling us a little bit about it. Here are the volunteers helping them do that:


Posted by beeinbosnia at 1:37 pm No comments:

A group of 5 young people came from England and Wales to visit us in Banja Luka. While they were here, they helped us put on a "British Evening" at the Educational/Cultural Centre "Ihtus". Here I am introducing the team:
The evening was kicked off with a "Pub quiz" about Great Britain:  Here are the different groups writing down their answers: 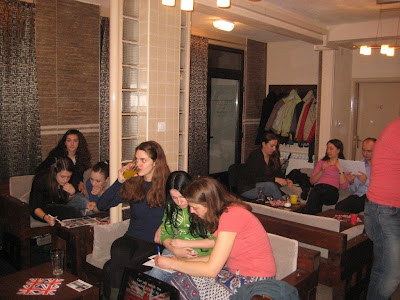 And the team that won were the "Chubby Bunnies":

The quiz was followed by scrumptious eats which we had spent most of the day making :-) Beside the below sausage rolls and cheese and pineapple sticks, they also had scones with jam and cream, and trifle! Everyone was also treated to a cup of tea with milk (very unusual here!) 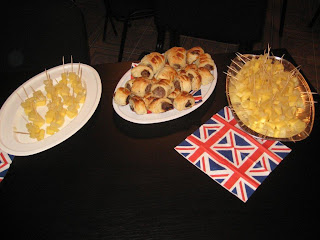 And to end off, Ester sang us some lovely songs: 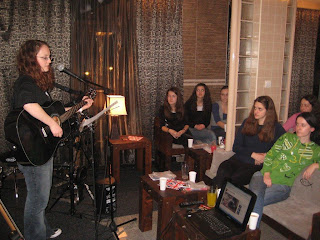 It was great to have the team, and the evening was a great success!
Posted by beeinbosnia at 8:41 am 1 comment:

I spent the last week of my time in South Africa at a retreat on the Hartbeespoort dam near Johannesburg - the views from the retreat centre were magnificent: 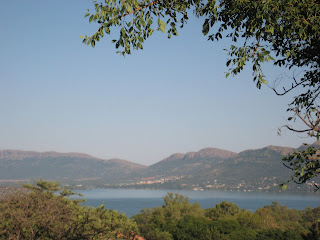 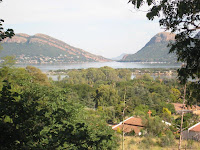 The retreat was run by two lovely ladies, Jan and Mintie, and a wonderful staff from all over. This is the 3rd one of these retreats that I have been on and the first time I actually managed to get my picture with them: 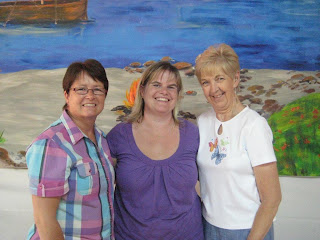 The lovely mural which was in our meeting room and depicts Jesus on the shores of the Galilee was painted by Estelle and Elma (left): 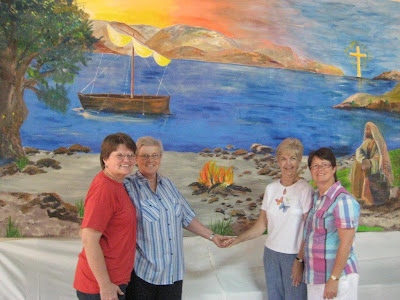 There were 30 singles on the retreat (all ladies!) and we had plenary sessions in the morning and then free time in the afternoons.The theme of the week was the Beatitudes (from Matthew 5) and Jan who was the main speaker got those of us with different languages of the Bible to read it out in our language - either our mother tongue, or the language of the country where we are working. I didn't have my Serbian Bible with me, but I did have the Serbian translation on my computer so I copied that out so I could read it out (below). It was so nice to be able to hear God's word in languages from all over the world - including Cantonese! 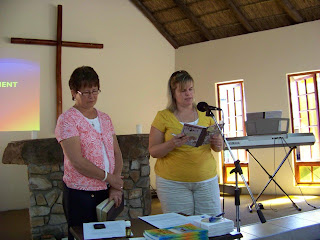 We also had small group times in the evenings. I was in a great small group as is evident from the below photo :-)
It was such a great way to transition from Cape Town to Banja Luka, and I am so glad that I ended up my time in South Africa in this way!
Posted by beeinbosnia at 4:12 pm No comments:

My heart is in two places...

This is my last night in Cape Town before I start heading back to Bosnia. I can't believe that almost 3 months has passed since I arrived! I will be at a retreat near Johannesburg for a week and get back to Banja Luka next Friday. This week has been about saying goodbye again to all my friends and family whom I won't get to see again for almost 2 years... I have even started saying "so, see you in two years" which is kind of weird really, but that is my life!
I am blessed by the fact that I do still have a lot of friends in Cape Town and that they do want to see me and spend time with me when I come. It has been so nice reconnecting with them and with my family that it, of course, makes it harder to leave again... but leave I must and I have good friends and "family" on that side which help me look forward to going back: but the reality is that my heart is in two places - once again I am neither here nor there
Posted by beeinbosnia at 9:50 pm 1 comment: