Neither here nor there...

I remember the first time I came back to South Africa for furlough/holiday/vacation/sabbatical/whatever you want to call it... I felt like I was neither here nor there. I wanted to even write a book called "neither here nor there" about the experience (and still may one day!). This strange "reverse culture shock" is still the case, although I find myself being better at adjusting between the two: it is like a switch in my head goes on here and I act more South African: go barefoot, not stress about going out with wet hair, put my handbag on the floor amongst other things. And the same goes when I go back...

But, when I am here I miss there and when I am there I miss here... it is hard. Luckily, part of what I am doing while I am in South Africa is sharing my life in Bosnia to people here*, and so I get to share and talk about what goes on there, so it is a part of me here. (and of course in Bosnia people ask me all the time about my life in SA so the same goes there).

Also, people usually ask me where is "home": well, I say I am going "home" to South Africa when I am in Bosnia, and now I find myself thinking that I will be going "home" to Bosnia in 5 weeks... so both are "home" and neither...I am neither here nor there... I guess the best answer is that home is ultimately not here in this life, on this earth... And actually we are all neither here nor there...


*If you are in Cape Town and interested in finding out more about what I am doing: there will be a Bosnian Evening at Claremont Methodist Church on the 22nd of February at 7pm...
Posted by beeinbosnia at 9:28 pm 2 comments:

We did such a lot with Ljilja and Sina while they were here (see part 1 for more) for two weeks: and after a week we discovered that there was actually a Cape Town Big 6 and we had only done one of them: the Waterfront:
Here with Table Mountain (and its tablecloth!) in the background: 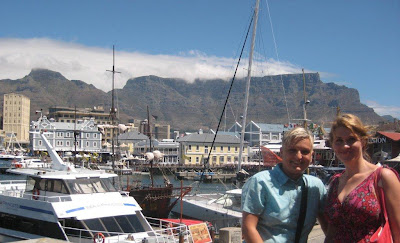 We discovered this when we went up Table Mountain on Saturday night, as Table Mountain is also one of the Big 6. My aunt, Jan, took us to the top to celebrate her birthday with a sunset picnic and it was more than perfect. No wind (for those of you who don't know Cape Town - this is unusual!) and the sunset was the so breath-taking: pictures just don't do it justice:
Happy Birthday Jan!! 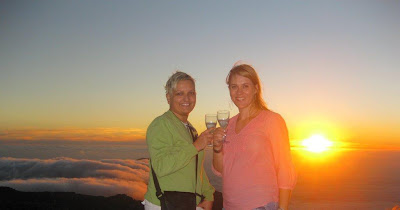 Robben Island was number 3 on the list: this was where Nelson Mandela (and many others) were imprisoned during the apartheid years and it is a sober reminder of the not-so-good stuff that went on in South Africa in the past...
But not for us to get too serious: Here we are hamming it up near Nelson's cell: 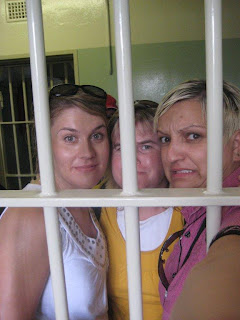 Another feature of the Island (which is in Table Bay) is that it has stunning views of Table Mountain: 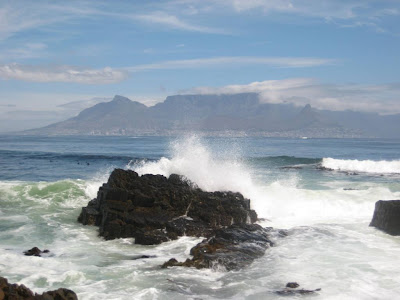 We then had a beach day (yay!) and waited for the wind to die down for my dad to take us to number 4: Cape Point. Most people think it is the southernmost tip of Africa, which is actually Cape Agulhas about 200km East: and in fact we even heard some guy confidently telling his wife "this is the southernmost tip of Africa", but were too scared to disillusion him! This picture is actually of us and Cape Maclear and the Cape of Good Hope: but we didn't have any group pics in front of the actual "Cape Point": but you get the idea of the beauty of the place!! 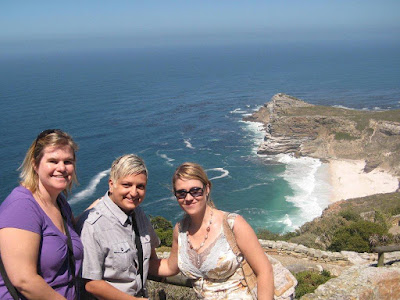 And here we are at the southwestern most tip of Africa: Cape of Good Hope: 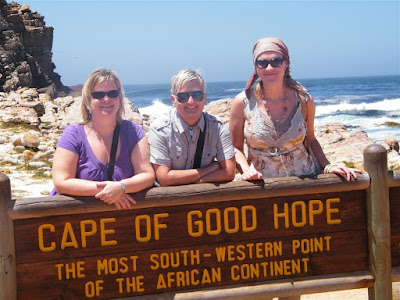 And dad took us for a picnic lunch at Buffelsbay which is stunning: 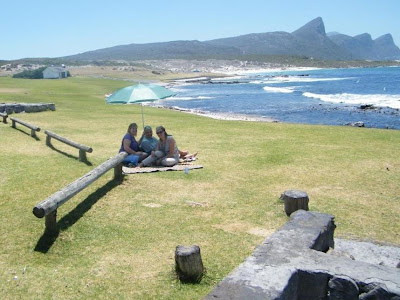 And luckily we had already encountered these guys on the road above Buffelsbay going away from the beach: they can be quite dangerous. Signs everywhere saying "Beware of the Baboons" didn't make an impact on our foreign guests: Ljilja wanted to take a better picture and so tells Sina "put down the window" and Sina starts doing it until Dad and I both scream in unison "no, no no nononoooooooo"!!! Luckily they didn't get in the car, but they can be quite aggressive as tourists have fed them and so they associate cars with food... 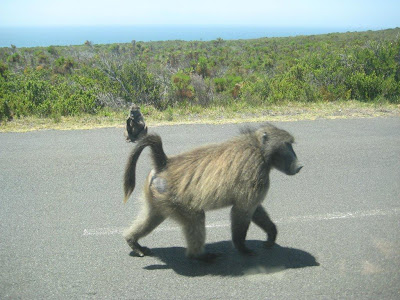 Next on the list was Kirstenbosch: our beautiful Botanical Gardens: Mom took us there and we wandered around before having brunch at the Tea garden. 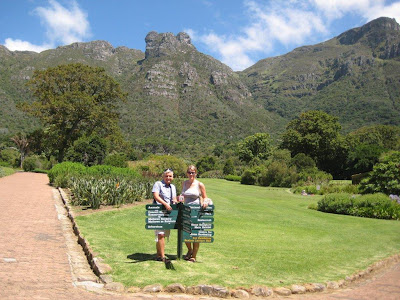 And to round off the Big 6 of Cape Town and so Sina could experience some winelands: we went to the Constantia Winelands. More specifically Groot Constantia and Buitenverwachting: Here they are at Groot Constantia: so pretty! 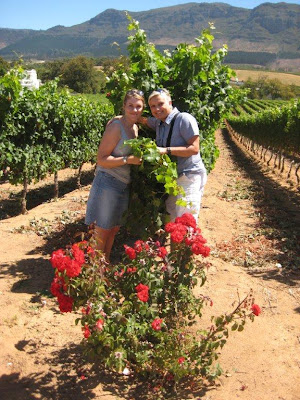 We did spend one day visiting Khayalitsha, one of the townships (poorer suburbs), so they could also see that side of Cape Town: thanks Heather for the tour!

We all had such a wonderful time with them, and I know they both left with fantastic memories of their Cape Town adventure!
Posted by beeinbosnia at 11:14 am 2 comments:

Ljilja (my roommate from Bosnia) and Sina (our friend from Finland) arrived on Orthodox Christmas (which is what Ljilja celebrates: the 7th of January) and so we celebrated with a lovely "summery" Christmas meal... and they got to see where I got my crazy side from... Christmas is not Christmas without silly hats! 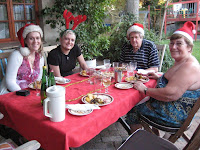 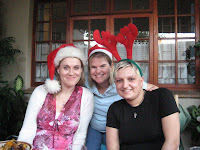 In the 5 days since they arrived, we have done an amazing amount of sight-seeing and also managed to do some shopping and relaxing by the pool... 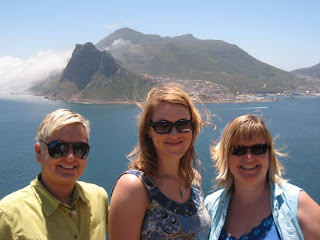 Milnerton/Table Mountain: we will have to go back on a clear day! 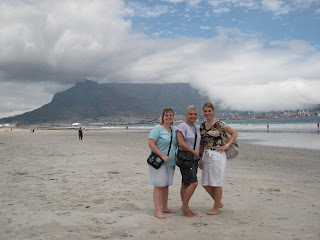 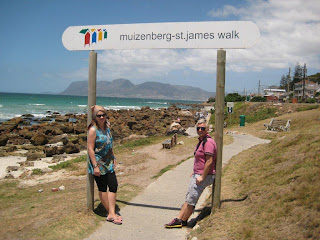 Boulders beach with the penguins: 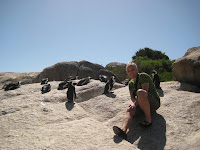 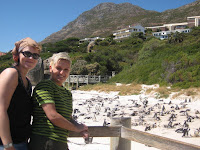 There are many more pictures and experiences, but we are having such a great time, that I don't have enough time to catch-up with my blog! But I hope you enjoy this little taste of their visit so far...
Posted by beeinbosnia at 9:50 am No comments:

With the boys enjoying the cricket, my mom, sister, niece and I went to have tea at my grandmother's house today. Four generations: (the fourth one, my mom, is taking the photo!) 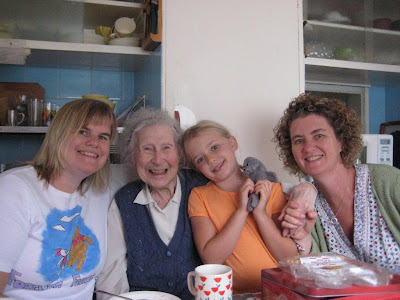 One of the attractions of my gran's house is that it is right opposite a PARK! So, Amy and I took advantage of this and spent time enjoying all the different things the park has to offer... Sammy the seal joined us (he is her "class seal" and the idea is to take pictures of him travelling around the world with the different pupils in the class: so he came with Amy from England to South Africa). Amy loves having her photo taken: can you tell? 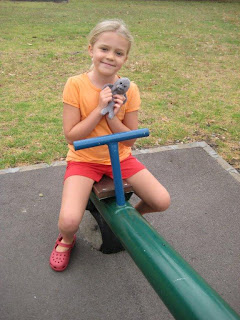 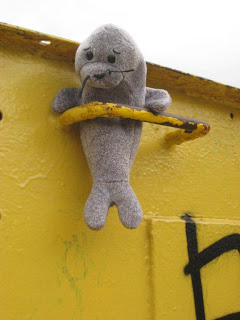 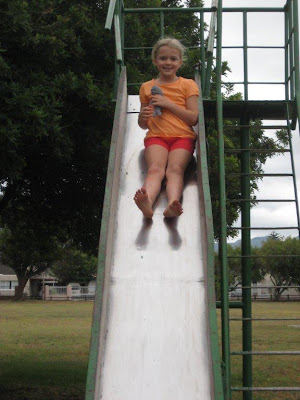 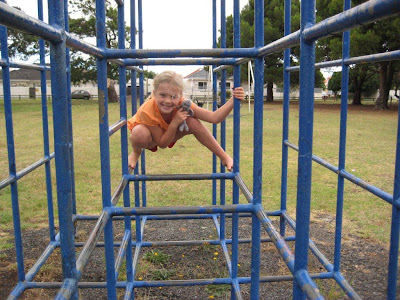 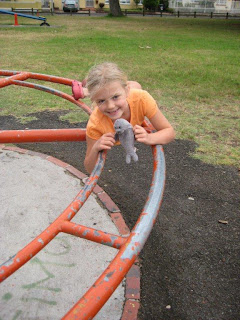 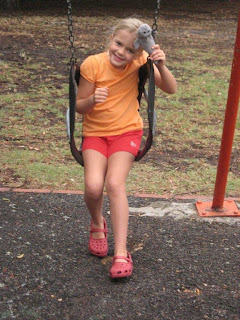 Posted by beeinbosnia at 5:21 pm No comments: