Iris and Justin do Cape Town...

I first met Iris and Justin when they came to Bosnia with the GO Team in 2008. They returned this year with a Bless team and the news that they were planning on coming to SA in December for a wedding... After conferring with my parents, they were invited to stay with us while in Cape Town and as it was over Christmas to have Christmas with us!! Here we are in our garden: 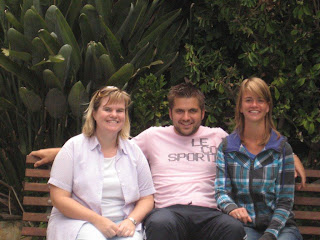 They sent this pic out as their Christmas Card to people in cold, snowy Holland: 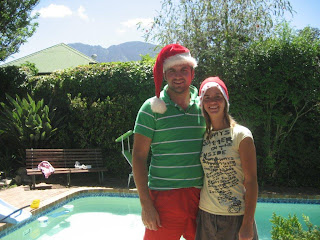 While they were here, they learnt about Cricket through watching it on TV with us, and not only that, but at my friends' house learnt how to play pool cricket! Their only comment was that the bat is heavy and it isn't as easy as it looks! 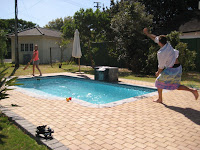 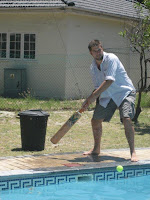 They returned to Holland today after what I think was a really nice stay! They got to do a lot of cool stuff while they were here, and also had a relaxing much- needed holiday. They are planning on bringing more teams to Bosnia, and I look forward to working with them again!
Posted by beeinbosnia at 9:15 pm 1 comment:

The true meaning of Christmas... 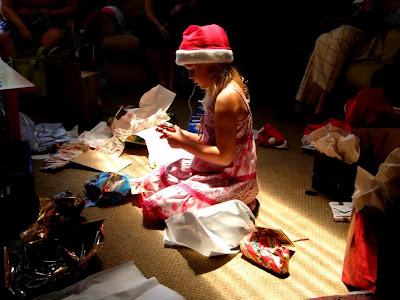 Let us not forget that the real gift at Christmas is that Jesus came to this earth to be our Saviour... forget about all the other trappings and keep focussing on that! (The photo is featuring my niece, Amy, and was taken by my dad during the Christmas present opening time... love it!)
Posted by beeinbosnia at 6:40 pm No comments:

I haven't been in South Africa for Christmas since 2002... I usually come in January every other year, and so miss the warm Christmas I grew up with...
So, it has been really special to be here with my family to celebrate our Saviour's birth. I have immersing myself in Christmas concerts and carol singing, and it has been really fun! And of course being able to swim and be in warm weather when it is literally freezing in Bosnia is not too shabby either!

Today there was 14 of us for dinner at my parents' house, including my friends, Justin and Iris, who are here visiting from Holland. When everyone arrived, it was time to open the piles of presents: 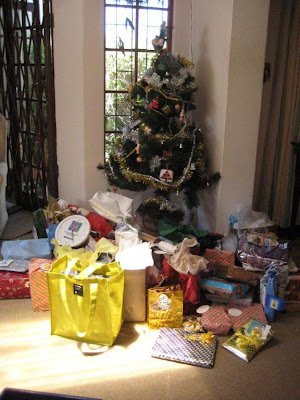 Here is my (almost) 90-year-old gran with Santa's helpers (aka my niece and nephew), James and Amy: 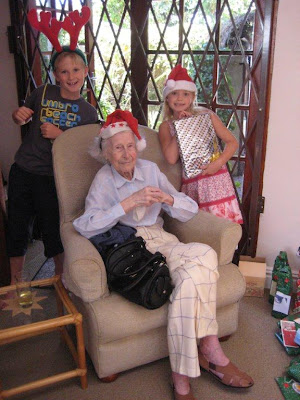 After the presents were open, it was time for lunch, complete with Christmas crackers and silly hats! 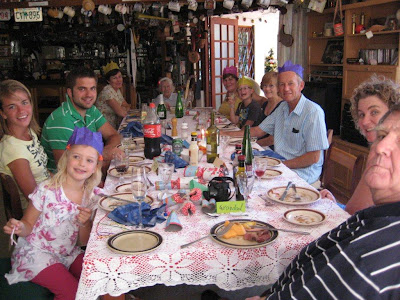 And if you were wondering where I get my whacky sense of life from, you don't have to look further than my gran :-) Pictured here with James' flashy glasses! 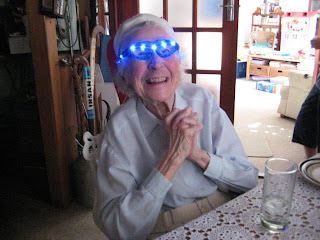 Posted by beeinbosnia at 8:09 pm 3 comments:

Yesterday I went to a braai (a barbecue in South Africa is called a "braai") for my friend Graeme's 40th birthday. I have been friends with Graeme for over 20 years, which is quite scary! It was great to spend time with him and his wife Nicole, celebrating his special anniversary. They organised for a marimba band (from the school where Nicole teaches) to come and help us have a fun evening... They played (very well) for us, and then we could have a go: Here are the first group of brave tryers: (Graeme is on the left): 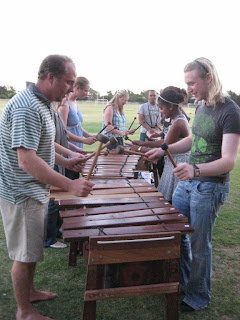 I had to give it a go too: although I was only brave enough to do the base part, and it isn't as easy as it looks! 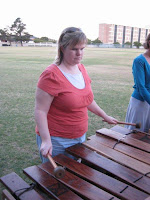 Posted by beeinbosnia at 8:34 am No comments:

Where the streets have my name...

So, my luggage finally arrived and of course the had broken the zip on my suitcase!!! I wrote to them and hopefully they will get back to me soon...

I went tonight with my Dad to go buy something off Gumtree (the equivalent of Craig's list) in a suburb of Cape Town I have never been to - Kirstenhof - and discovered two streets with both my names on them! And they are within two hundred metres of each other!!! How cool is that? 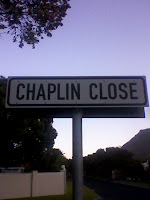 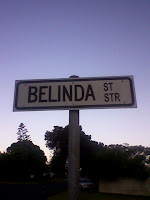 Posted by beeinbosnia at 8:40 pm No comments:

I am in South Africa, but my luggage is in Germany...

It took me 48 hours to get from door to door: I caught the bus to Zagreb on Wednesday morning and had lunch with my friend Juliana, before heading to the airport. Then the nightmare began...my flight from Zagreb to Frankfurt was diverted to Munich because of heavy snow. We all stood for 3 hours from 9.45pm-12.45am waiting to get rebooked and hopefully a hotel of some sort... No such luck. I got almost to the front of the queue and they told us that they were shutting down and would open up at 5am again... no hotel and by the time I got to the beds (camp cots in the airport) I almost didn't get one...(I am sorry to the person whose stuff I moved off the bed - you not snoozing, you loozing)... Eventually the next morning after about two hours of sleep, I got rebooked on a flight direct (with another airline) from Munich to Cape Town which got me here Friday morning (sans luggage!)

One of the things that fascinated me was the fact that there was a whole group of us who bonded in the queue, people from Slovakia, Australia, Croatia, the US: all stuck in the same situation and making the time go faster by talking to each other about everything and anything. And we didn't even know each others' names: and yet we were all excited when we all finally got rebooked or found another way, etc... I know I will never see any of them ever again, but for those few hours we felt like family. A kind weird estranged family maybe, but family nonetheless...

Now I am catching up on sleep and just getting used to being in this strange, warm, windy weather, trying to figure out what to wear (luckily I have some clothes here!) and praying that my luggage (which was pretty much 80% presents) does eventually get here!

And next time I will go via Istanbul... no snow!
Posted by beeinbosnia at 3:35 pm No comments:

After 6 weeks of Advanced Classes, we had our "graduation" tonight. We decided to have 6 weeks of classes, not "Club" and at the end to give an actual Certificate. 8 students out of the 15 that started, came each week and received their "Certificates". Over the 6 weeks, we have worked through a lot of good stuff: from discussions about the Chilean miners, to blonde jokes, and similes and idioms... we also played some fun games and just generally found ways that we could have fun while talking in English! David and Eliska have been faithful helpers, and it has been a really great group, as the below photo shows!!! 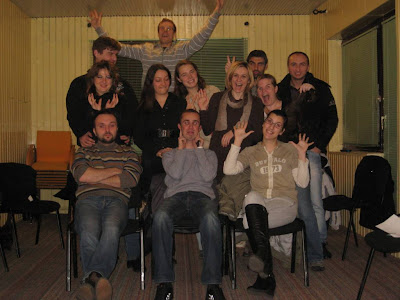 This group was a trial run to see how this format will work in the future, and it has shown to be successful. With the English Club I was never sure how many people would show up, and it made it hard to plan. With the classes, I knew that I would have a nice group of people and so was able to plan a lot better, and have more interesting activities... at least I hope so! We also did some of the fun games and activities that we did at the Club: "lateral thinking", for instance, is a firm favourite... I look forward to starting up another Advanced Class next year!
Posted by beeinbosnia at 10:07 pm No comments:

Here is a really goofy pic from last night. I so enjoy these kids and the volunteers who come along to help us with the club: 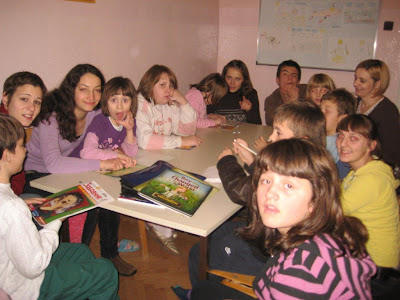 Over the weeks that we have been running the club, besides going over the books they have read and reading a bit to them, we have been doing little activities each time in order to make this poster: 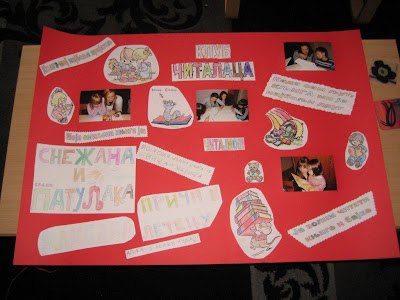 It is trying to get other kids to come along and read with us. It says things like "I love reading books and fairy-tales", "A book-my best friend", "when I am angry, a book is my best friend" and "let's read". Also some of their favourite books are on there "Snow white and the 7 dwarfs" and "Alibaba" among them. We also gave out some prizes last night (each time they read 5 books, they get a prize!) and that may be an even bigger incentive... but whatever way we do it, we are trying to get the kids at the Children's Home to fall in love with reading and make it a lifelong habit!
Posted by beeinbosnia at 2:40 pm No comments: