Once I got into this book by Kim Cash Tate, I couldn't put it down. The intertwined stories of the three best friends clearly show the message not only of God's faithfulness to us, but also our need to be faithful to our husbands and wives and to ourselves. Without understanding how our unfaithfulness can hurt not only each other, but also ourselves and ultimately God, we will not be able to live the way God intended. I love reading books like this one: a nice, wholesome novel, but also filled with meaning.

An interesting feature of the story for me is that two of the friends are African Americans and this is what sets this story apart from other literature for Christian women. It shows a different side, and one that I really enjoyed. I got involved in all the characters and enjoyed seeing how they ended up. I would highly recommend this book to any woman looking for a fulfilling read and one that keeps you involved.

I am writing this review for Booksneeze, but the opinion is my own.
Posted by beeinbosnia at 8:47 pm 1 comment:

I am safely back in Banja Luka after a wild time in the UK. I was really busy firstly with the Effective Communications Workshop in Harpenden and then also at the retreat for single Christian workers south of London at Pilgrim Hall: (where we had lovely sunny, but cold, weather almost all week!) 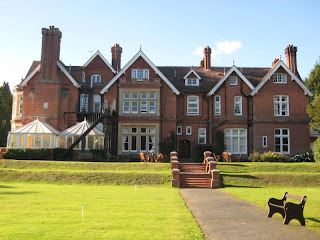 There were 30 people from all over the world who came to the retreat. Here I am in the traditional clothing from Nagaland (which is a part of India): which one of the ladies who is from there leant me to try on: 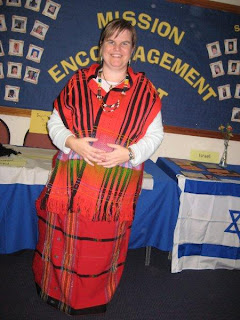 And here I am with some of the ladies in their traditional clothing: 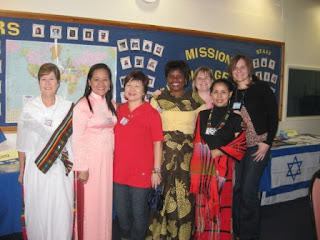 Besides wonderful times at the plenary sessions in the morning, we also had small groups in the evenings, where we could hang out and share and pray together. My group was hilarious and we had a fabulous time hanging out together: below is a photo of us: Lisa, myself, Jane, Dorothee and Barbara... 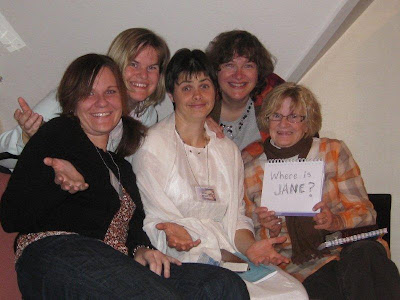 You might be wondering what the "where is Jane?" is all about... well let me see if I can explain. One night Jane was sharing about how she had got lost on her run that morning and had panicked that she would be late... so she made a shortcut through some brambles and cut herself up quite badly. She is English, and at one stage, like the English do sometimes, she said something like "Oh, Jane you have really done it now" and "Jane you are going to be late" while she was telling the story.

Then Lisa said to Barb "oh I saw that you fell down today, are you ok?". Barb, who is American and a great lady, while being a bit klutzy, said "oh I do that all the time, that is nothing! In fact in Hungary {where she works} I get up as quick as possible so people don't come to help and it is embarrassing. But when I fell down onto that lovely carpet, I just wanted to stay there and rest awhile as it was so nice." Anyway, we had a great laugh at that, and it helps you to get a picture of our lovely Barb...

We talked about some other things and were then getting into the serious stuff: discussing the fact that we don't need to panic when we get lost as we are never alone - God is with us always... And again discussing the morning's incident when Jane was lost and alone... Then Barb pipes up "but where is Jane?": she had thought (because of Jane talking about herself in the third person) that Jane had been running with another Jane (there were two on the retreat) and throughout our discussion was thinking to herself about what happened to the other Jane!! So, we had to take the pic!!! Hope you enjoyed the story :-)

Another fun thing that happened on the retreat was that a few of us got together on the last night to sing a song (with our own words) to the tune of the "Sound of Music" song "So Long, farewell..." It was inspired by the staircase in the "Baronial Hall" at the place we were staying: 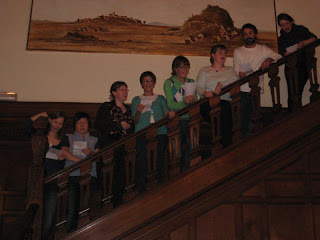 Every night I went up the stairs singing the original song...and so thought we should do the original, but when I got others interested they suggested we write new words and one even volunteered to do it... and without much practice we managed to do a pretty good job, even if I say so myself...and it was a nice fun way to end what had been quite a sad evening because of the reality of leaving this great group of people.

In the afternoons we were mostly free, so I did some walking and reflecting and inspired by the photography class at the Communications Workshop, some photo taking: This one reminds me of the photos of my ex-colleague from Finland, Lea: 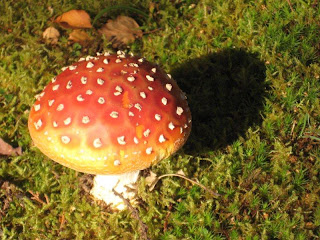 And this one perfectly sums up the retreat week for me: a time to reflect on the road that I am on: and even though I can't see the end of it, I know the one who will be with me on the way!. 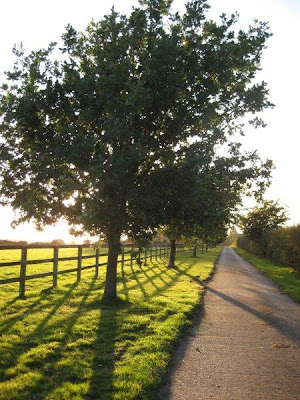 I am thankful for my family, good friends, wonderful times here at the workshop and good news coming from my Canadian family. For more details go here

And I am grateful for how much fun my nephews had this weekend: They have really been missing each other, and so it is great that finally were able to get together: Here is a great photo from the hospital: 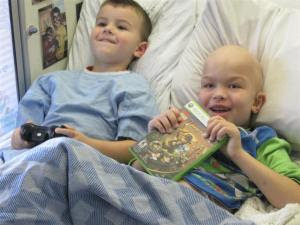 Posted by beeinbosnia at 12:13 pm No comments:

I have been in England since Wednesday, helping to set up for and now run an "Effective Communication Workshop" here at the YWAM Harpenden base just north of London. This a EuroCom workshop focusing on making people in YWAM more effective in their communication in all areas: design, web, writing, photography, etc. It covers a lot of everything over three/four days and then we break into smaller groups to cover some topics in more depth. The group is made of 14 people from all over (12 different nationalities represented!!) and they are a LOT of fun.

Besides handling logistics and other stuff, I also taught on "writing" today, and had a great time. even though I am not an expert by any means, I feel like I can share some of the tidbits I have picked up about writing over the years... After teaching some basic principles, I gave them a writing assignment. They had to write for 10 minutes on the topic of "the first time..."
Here they are getting down to it: 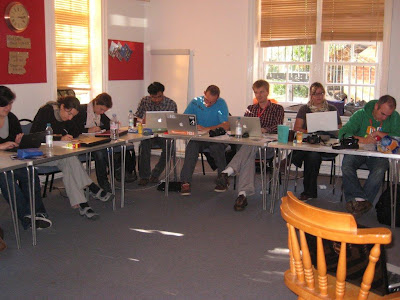 Yes, we have a lot of laptops!! 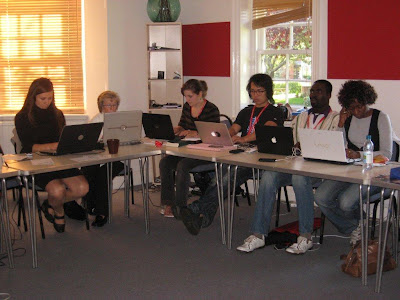 Here is Aneesh from India reading out his story, which described the first time he encountered snow. Thanks to Rob Darby for the great photo. 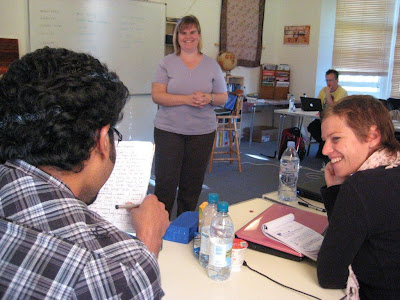 I am really enjoying being with this group of wonderful people and not only "teaching" them, but also learning from them along the way. I will be running a workshop (we break into smaller groups) on "writing/interviewing" later on in the week and I look forward to seeing how fun that will be.
Posted by beeinbosnia at 11:42 pm No comments: