Off to the UK

I leave in the morning for a trip to the UK. I will be there 10 days, and traveling to visit friends and family from London to Stoke-on-Trent to Oxford and back to London. I am so looking forward to catching up with friends and seeing my sister and her kids!
Posted by ywamce at 10:05 am No comments:

So last night I finally finished the beginner's English class, which we ran through one of our projects last year. We finished with actual classes at the end of November, but as this was the first time for me teaching Beginners I didn't pace it well enough and we didn't finish the actual book. One of the class, Sladja asked me if we could finish the book together and as she was the hardest working and really wanted to, I was all for it!

We met together each week in a cafe and went over the lesson and we finally finished it last night! Here is a pic* of her working hard in our unusual setting: 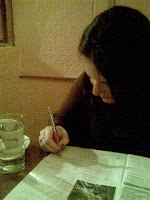 It was great for me to see how much she had learnt in the year - from literally not knowing even "my name is...", last night in the "test" I gave her, she and I were able to talk about her family, her likes and dislikes, and other basic stuff. I figure even if only one person really finished the course, it was worth it!!

*this photo was taken on my new spiffy phone camera. I eventually gave up on the "express delivery" and went into their client centre and got the phone direct! I am so enjoying having a phone I can actually use! (and the features like camera and radio are fun to use too!!)
Posted by ywamce at 10:58 am No comments:

So, we started in October 2005 with the Church registration. We wanted to be registered as "Evangelical Church-Christian Fellowship" here in Banja Luka. One of the conditions for registration is that we have to have 300 signatures from people who support the registration. We took a long time to get those signatures - almost 11 months. Then it took a while to get all the paperwork in order (our lawyer was learning along with us what all was needed). We finally sent all the paperwork to the Ministry in Sarajevo only in April 2007.

This was when we found out that there was already a denomination called the "Evangelical Church" and we couldn't be registered as that without their approval. We took steps to get that approval from them, and to cut a long story short, in the end they were unable to give it to us in the time that we had available (the Ministry having given us a deadline). So, as suggested by the people (who are very nice) in the Ministry in Sarajevo, we decided instead to change the name on the application to "Protestant Church-Christian Fellowship" which is in essence the same thing, but "Protestant Church" hasn't been taken yet!!

Then we found out in December 2007 that as we had changed the name we had to get the 300 signatures AGAIN... and this time in TWO WEEKS!!! We eventually got an extension of two more weeks because of the holidays, but that still meant we only had ONE MONTH...

The deadline was today. After all of us frantically getting signatures all month, we thought we had it all together yesterday, but then we counted up the pages and somehow one had gone missing and we were one short (and each page has 15 signatures on it). This meant that we now had to find 15 more signatures from somewhere when we have already sucked most wells dry... Ljilja and I figured out some people, and managed to go and get 9 signatures from them, running around all of Banja Luka - but where to get the other 6? Ljilja remembered one more friend, and sent him a message. He phoned back and said "well, I am here with my girlfriend and her parents and we can also go over and take from my parents as well" - so there was our 6~ PTL!!!

So, we got all the papers into the lawyer and she will send it on to Sarajevo. Now it is just a matter of time (and prayer!) and we will be registered!!! Finally!
Posted by ywamce at 1:27 am No comments:

Ok, I suppose that I should be used to it after being here 7 years (almost- in 2 days is the anniversary!), but even I had a laugh at this one...

I need to get a new cell phone. My one has developed the interesting habit of turning itself off and on when I use the "7" key (and some other keys as well, but EVERY time I push the 7 it turns itself off and on). Now try writing an sms without the 7 key and you will see why this is a problem. (I must boast that I did manage to send Ljilja a message by substituting z for s, l for r and b for p and she actually understood it!!!) But because when the phone turns itself off and on it loses whatever you have written in the message this just got too frustrating and I have now given up and decided to get a new phone...

Now after shopping around the best deal I can get right now is through my network by signing up for 2 year contract. As I am already on contract, it just makes sense to get the phone through them. They have an "Express Delivery" service to your house if you phone a number. So I am thinking "express delivery" means like "same day" or at least "next day". I phone and I order the phone and give my details and it takes forEVER and then the lady says "and your phone will be delivered to you in 5-8 working days". I say "what?" and she says "we send it through Fed-Ex and they take 5-8 days to deliver."

Now I am going to England next week and the reason I need the phone now is to take it with me... so this is not okay!! Anyway in the end they said I can phone Fed Ex and get it delivered in time, so it shouldn't be a problem - but I just think it is great that "Express Delivery" actually means "5-8 working days" who would have thought!?!!
Posted by ywamce at 10:07 am No comments:

Today I went over to celebrate Serb Orthodox Christmas with Dragana and her family. Here is her dad lighting the traditional candle (in the wheatgrass symbolising new life) with Mirjana, Dragana and Sergej (her nephew) in the background. Check out the BIG homemade bread in the foreground... 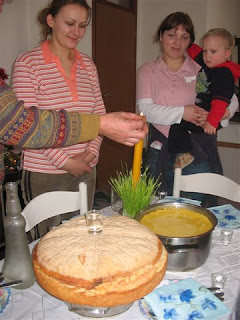 This is all of us toasting with home-made plum brandy! Dragana's dad, Jovo, Mirjana (her sister-in-law), Rada her mom, Dragana, Sergej and I. 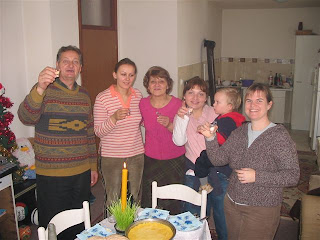 This is a pic of Dragana's Dad and brother breaking the bread (which contains one coin which someone has to find and her dad found it!). 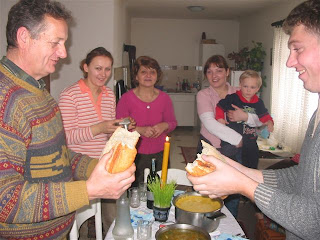 We then sat down and enjoyed a very BIG lunch of soup, cicvara (which is made of corn four, white unprocessed cheese, egg, oil and milk and is something that is only really made on Christmas!), pita, roast pork, dried meat, cheese and salad. This was followed by cake and pumpkin pie, which I made from the butternut that Dragana's father grew from me (I made it as a kind of thank-you!): 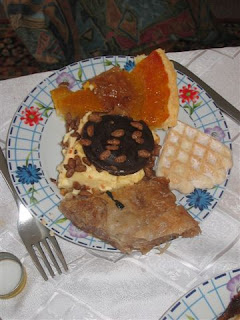 Posted by ywamce at 5:00 am No comments:

I went to "Badnja Vece" (Christmas eve dinner) at Aleksandra's house. It was just her, her mum, brother, gran and I. The "Badnjak" is the Oak Tree that is found and cut on Christmas eve. They are either taken to the church where they are decorated and then burnt in front of the church or brought into the house and decorated and a bit of it burnt. This is supposed to symbolise the fire that was burning in the stable to keep the Christ child warm and reminds them of the light and warmth of Jesus in our lives. It also symbolises the old being burnt and done away with, to start a new year afresh.

The meal is "posno" ie no meat, milk or eggs as it is the last day of the 40 day Christmas fast (which is broken tomorrow!). I was a big hit because I figured out how to make my oatmeal unbaked cookies in a "posno" way and if you have tried them, you know that they are good!!

Here are Aleksandra and I in front of the Badnjak: 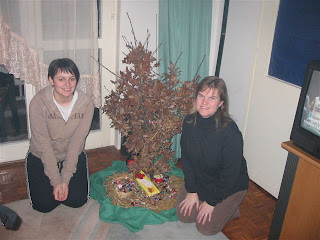 And her brother Vladen (otherwise known as the white ghost arsonist) lighting it on the balcony. 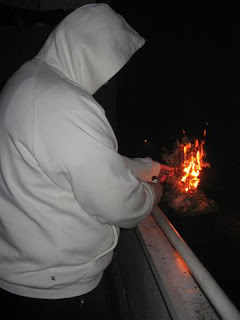 Posted by ywamce at 9:55 am No comments:

Today after church the Ukrainians, Sergej and Ira, organised a great Christmas party for the children. We were divided into two teams. Here is my team, the "Pastiri" or "Shepherds": 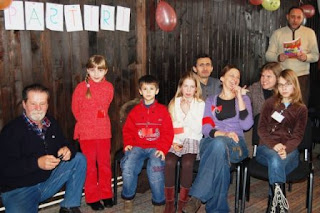 We played a whole lot of games and our team won!! One of the games was "pin the clothespin on the Christmas tree" (otherwise known as me!): 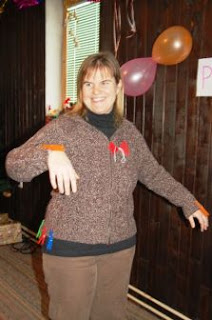 All in all the kids had a fantastic time and the adults along with them! It was a good way to celebrate Jesus' birth!

Posted by ywamce at 5:43 am No comments:

Arty pic of me and Janice with Ljilja's lovely pizza! Mmmm! 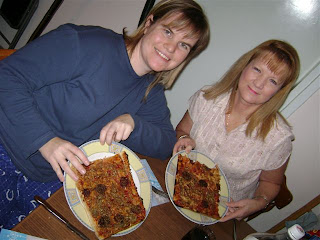 Posted by ywamce at 6:25 am No comments:

Here is the tree lined street in the snow... isn't it pretty? 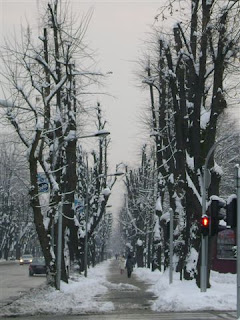 This is me on the street in my new jacket which is just perfect for the cold winter we are having!! I got it at the market for 50KM (about R250), so very good deal! 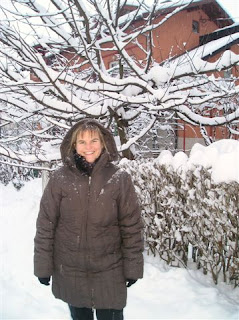 Posted by ywamce at 5:16 am No comments:

We celebrated New Year's at our house with Janice (who came up from Sarajevo to celebrate with us) and Lea (from Finland). Miika and Mirjam (also from Finland) came to drop off Lea (who is the teacher for their four daughters) and to hang with us at the beginning of the evening before heading home to celebrate with their girls. Here is a picture of all of us: Mirjam, Lea, Miika, Janice, me and Ljilja. 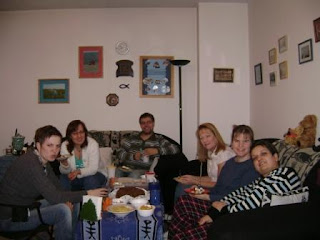 We were going to go to the square to watch the fireworks, but it was SNOWING so hard (and it looked really sad on the TV) that we decided we would stay nice and warm inside our lovely warm apartment!! It was a nice, quiet, relaxed, pajama party way to bring in the New Year...
Posted by ywamce at 8:05 am No comments: