This is an example of how we need to not go with our assumptions about people - and to give people the benefit of the doubt!!

When I put washing in the machine I usually manage to leave one of a pair of socks in the basket. It is something I usually do, and it drives Ljilja crazy! The other day when I was putting the washing in, I made very sure that I put all of the socks in, because I knew that if I didn't I wouldn't hear the end of it...

Ljilja was hanging out the washing and found one pair had only one sock (and of course it was hers!) and was ranting about me not putting both the socks in... as this is what I NORMALLY do! I went to the machine (because I KNEW I had put them in), and of course found the missing sock there... so I said "next time before you want to accuse me of something, check the machine".

And it just hit me, that we often assume things about someone (yes I had done it a LOT in the past, so it was a good assumption) without checking the machine first!!! And this is a challenge to myself and to readers of this blog to not always think the worst about people, as people do change - but rather to "check the machine" and give them the benefit of the doubt!
Posted by ywamce at 12:38 am No comments:

We decided to have a YWAM Bosnia meeting in Sarajevo this past weekend as many of the YWAMers in Bosnia are going to be leaving for a few months and it was either have it then or not have it until next year. There was a meeting for Samaritan's Purse shoebox packages on Friday, also in Sarajevo, so I decided to go down for that with Miika (from Finland) in his Toyota Landcruiser and then stay for the meeting on Saturday and come back on the bus on Saturday in time to lead worship for Sunday service.

My other reason for doing it this way is that Sinisa (who is without car at the moment - loooong story) needed to go a conference in Serbia and so I offered him my little Peugeot so he could get there. Now my car has been to Serbia and I haven't!! Will have to remedy that! (it is the fact that I need a visa that has stopped me from going!)

Miika and I left at 5.30am on Friday and of course we got to the meeting on time at 9am and even the people organising the meeting hadn't yet arrived!! We, from Banja Luka, got there before everyone from Sarajevo! The meetings were good, but as the only reason I was there was because someone from our church had to be at the meeting, otherwise we wouldn't be able to actually get the packages at all, it was more "I have to be here" than "I want to be here". It was nice seeing people I haven't seen in a long time though, so that made up for it.

The YWAM meetings on Saturday were really good and I was glad I had made it to them - especially to see some people whom I haven't seen in an age and a half. I left at 3pm to catch the 3.30pm bus back to Banja Luka. And on the bus I remembered why I HATE taking the bus especially through the mountainous roads of Bosnia (I don't mind up to Zagreb as it is all highway). I had some books and sermons on tape that I listened to, so that helped, but, well, "never again" sprang to mind quite a few times.

I luckily got the bus driver to drop me off along the way (so it was a 5 min walk to home, as opposed to 30 minutes from the bus station - remember no car) and I realised that there are some advantages to taking the Bus in Bosnia. They really don't mind dropping people off along the way!

The whole way along the road I remembered the conversation I had last year with an EUFOR (ie International) soldier who was complaining about having to go to Sarajevo all the time. I was ready to commiserate with him how terrible it was going by car or train or bus, so I asked him "how do you get there?". After his answer "helicopter" I didn't feel much pity!! But the whole 5 and half hours back from Sarajevo I was wishing I had got his number!!!!
Posted by ywamce at 11:11 am 1 comment:

Photo with mom at Dragana's 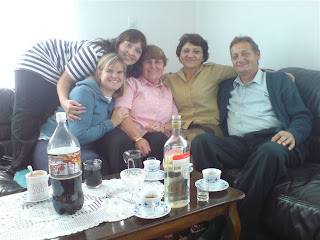 This is a photo of us with Dragana and her parents when we went for "cake" at Dragana's house. We had a great time with them and mom really enjoyed herself. She tried the Rakija - plum brandy - which was made by Dragana's dad and the Bosnian coffee and got treated to baklava and another cake which Dragana made. In the end it was hard to leave as they took to her so much!!
Posted by ywamce at 2:25 am No comments:

Mom has come and gone in what was a whistlestop 3-day visit. It was great having her here - despite the fact that it rained a LOT while she was here, and was pretty chilly. Despite the horrible weather, I did get a chance to show her around Banja Luka, to introduce her to people that I work with and play with and show her a good time as well! 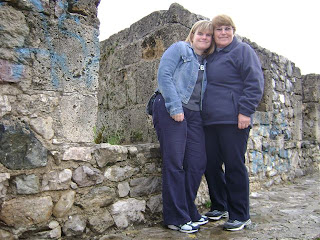 Here we are at the Kastel Fortress (it is a self-timer photo, can you tell?) on the Banja Luka "tour". 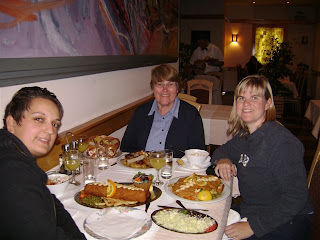 Here we are with Ljilja out for lunch at the restaurant Vrbas. We ended up taking most of the food home for lunch the next day as well! It really was WAY too much food!

It was sad to say goodbye again after such a lovely visit, but I am just grateful that she actually made with all the hassles with visas and passports-I had really given up hope of her making it at all, so even if it was short, it was a real blessing!
Posted by ywamce at 1:58 am 1 comment: