Ljilja and I needed to paint our two bedrooms (the other rooms having been done 3 years ago), and we realised that if we didn't do them now we would be able to do them at all (our schedules are going to get even busier very soon!), so we bit the bullet and did the job...

We started on Wednesday and spent all of Thursday and then some of Friday... and well we finished the painting part - now it is just the cleaning up afterwards - and of course we keep finding things to do... like varnishing part of the parquet floor in my room (which was for some reason unvarnished). This is actually pretty easy, but as I can't sleep in my room until we finish and we have to wait 12 hours between coats (and we undercoated with colour), I will still be a refugee for another night... (Haven't slept in my bed since this started - either on matresses on the floor in the lounge or now in Ljilja's room).

Anyway - we mixed our own colours (did I mention that all this only cost us 40KM - or about R180!) and I think we did a fantastic job. Our neighbour across the street thought we were joking when we told her that we had done it ourselves!! She thought we must have had help!

Ljilja's room is as planned, red and yellow, my room is green in two different varieties with yellow edgings - and looks fantastic - but this all came about by accident. I wanted two walls green and two walls yellow - and I started on the yellow edgings with a brush while Ljilja did her room. But then we ran out of yellow. We only had enough to do the whole of my room with yellow edgings (by putting tape over the yellow) and did that. Then we didn't mix enough of the dark green- and instead of mixing more and not getting it right we decided to just go really light to make it look like we did it on purpose... Anyway, even if I say so myself, it looks great... I can't wait until we finally clean up the mess so we can invite people to see it!

Here are some photos for your enjoyment:

Ljilja's room - with some framed pics of Trebinje (her home town) in her special red frame. 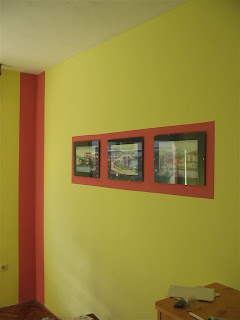 This gives you and idea of my room... 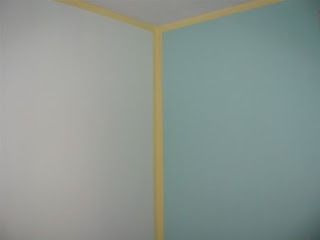 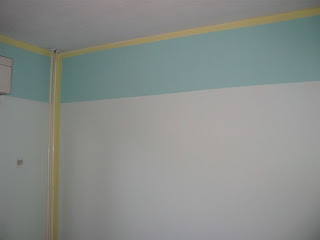 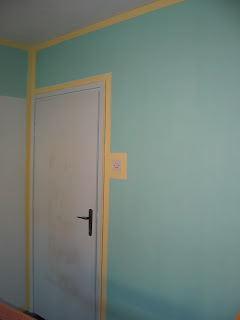 And no we don't have some obsessive-compulsive disorder which means our house is in a mess - we just had to put the stuff from our rooms somewhere else!! And luckily we were able to find place to sleep somewhere!! 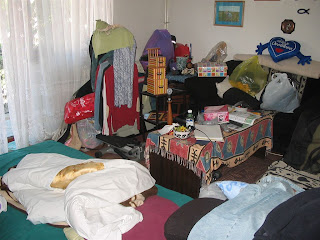 Ljilja and I travelled down to Trebinje this past weekend (Trebinje is her home town - and is about 6 hours drive away on the Bosnian/Hercegovinian roads) to attend Sladja's wedding. Sladja stayed with us quite a lot and became almost like a "third roommate" We were very glad to be able to go to her wedding and it was a special day!

The wedding started at 9am with us guests (250 of us) meeting up at the hall where it was held. We were there, eating and drinking (this is a Serb wedding!) until 10.30. Then the groom's family went to go get the bride from her house. We she arrived with fanfare and flags, etc we all stood up and clapped (and some of us cried-including her a little bit) and then carried on eating and drinking (except me for those wondering - other than juice!) until 11.30 when the magistrate came and held the "official" wedding at the hall. There was also live music - the band played all day and into the night with only two one hour breaks...

Here are pictures of the food we had to eat in the morning (mmmmm) , Sladja's arrival and of the happy couple with best man and bridesmaid at the magistrate's wedding. 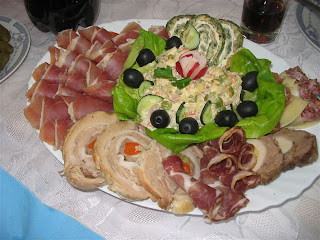 Sladja's arrival: She is between the djeverusa and the djever - her husband to be's closest female and male relatives, in this case his sister and cousin. Spot the Republic of Srpska flag with the apple on top - and the accordian - which thankfully only went as far as the door... 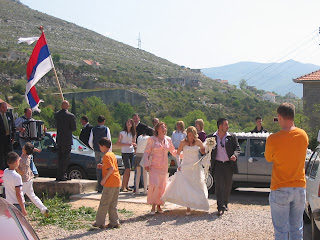 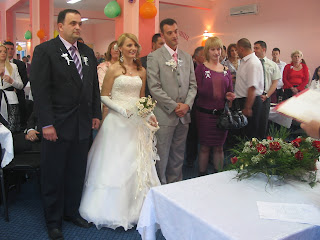 After the first wedding we sat and ate and drank again until it was time to go to the church wedding (at 1.30). We all drove in a long line with decorated cars (with ribbons) hooting and throwing sweets at the children that we passed (we had loads of sweets so this part was really fun!). We got to the church and enjoyed the trumpet players outside until the wedding before us left. Then it was time for the ceremony which was very intricate and interesting... I include a picture of part of it where they wear crowns here. 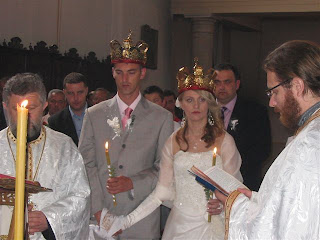 After the church wedding we went to his parent's village for some ceremonies to be held there (including throwing some stuff over the house and such - interesting!!). And then we drove back to the hall -all of this in a long line hooting and throwing sweets - we were almost an hour in the cars, so this was an important part of the day as well!

We got back and had lunch (at 4pm!) which was amazing and then after cake and coffee had a bit of a break from the festivities while the bride and groom went home to change - we just hung out and ate and drank some more... (spot the trend). At 8 other people joined the party (about 100-150) and we danced until the wee hours... I even picked up how to dance the traditional "Kolo" and word quickly went around for people to look at the "African" doing the traditional Bosnian dance!

Here are Ljilja and I when we were just hanging out. Ljilja did take some pictures of my dancing - but as we were going so fast (!) none of them really came out :-) 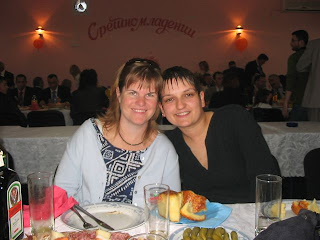 All in all it was a great (although extremely long) day and it was a never-to-be-forgotten exerience!
Posted by ywamce at 9:57 am 1 comment: 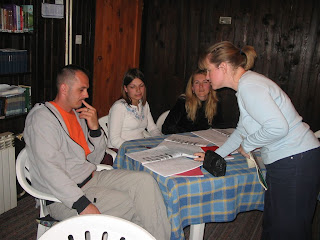 I am teaching a beginner's English class for our one Humanitarian Aid project and boy is it different from teaching upper levels. Some of them have NEVER EVER said a word in English before! Until now that is! They are catching on quickly and I am enjoying myself. Below see two of the more "advanced" acting out with me how to introduce people to each other in English... Yes, the one girl is on roller skates! 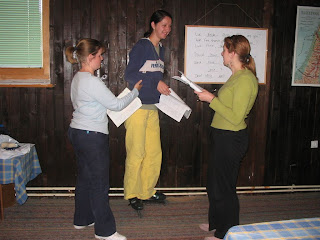 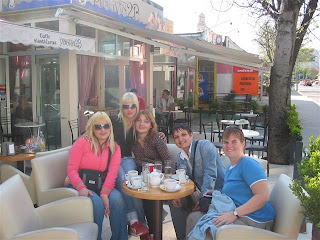 Easter has been really fun as Ljilja's sister Sladja and her friend Ljubica have been with us for the weekend and they are "show and program" together. Sladja is 5 years younger than Ljilja and completely different in so many ways - she and Ljubica have kept us mostly rolling in laughter with their antics. Here we all are with our friend Dragana in our favourite place in Banja Luka - Pingvin 2B. Ljubica and Sladja (in black) are the two "hot" blondes, Dragana, then Ljilja and I.
Posted by ywamce at 10:30 am 1 comment:

I arrived safely in the lovely country of Bosnia on Saturday after a 48 hour trip back... I had 24 hours in the UK in between flights and spent that with friends at the YWAM base in Harpenden (as I was flying out of Luton which is quite close).

My flight from London was delayed so when I arrived in Zagreb, Croatia, I only had 45 minutes in which to get through customs, get my luggage, get money from the bank machine and catch the bus from the airport to the bus station in order to catch the bus for Banja Luka! (the next bus being 4 hours later). I thought I had NO chance, but PTL I prayed that if the Lord wanted me to make it that he would make a way... and I got through customs and got my luggage, got money from the machine in time to JUST catch the airport bus (which goes every 1/2 hour). When I arrived at the bus station with my 40plus Kgs of luggage an angel porter guy helped me (for a payment!) and I literally just made the bus for Banja Luka!! Without the porter it would have gone before I got there. I was so grateful as I don't know if I could have lasted another 4 hours!!

I got to my Banja Luka home and my lovely roommate had made my favourite food (Bosnian pie-one lot with potato and the other with spinach - the funny part was that normally I make the spinach one, so I had to tell her how to make it over skype from SA. Here I am an African teaching a Bosnian to make Bosnian pie!!) and had balloons up in the hallway and everything was clean and spiffing... very nice welcome indeed!
Posted by ywamce at 6:56 am 1 comment: