English teaching can be fun... 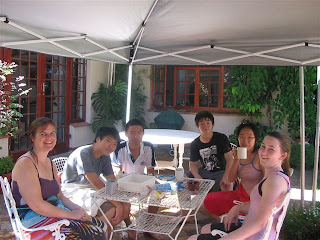 I decided for the last day instead of class, to have the students over for a "pool party" at our place. So here we are:Me, Justin, Sean, Al, Jenny and my cousin, Lauren (commonly known as "Rolen"). At the end when we took them back to the school, Al said "teacher, very fun day", so I think they had a good time!
Posted by ywamce at 9:16 am 3 comments:

This week I have been teaching for the practical part of my TEFL (teaching english as a foreign language) course. My class of 5 Korean teenagers has been difficult at times, but quite fun. It has been really good to put into practice what I have learnt and actually see the results even in 4 days in the improvement in their language.

The way that we teach is called the "communicative method" which is all about getting them to speak and use the language as much as possible. I was quite worried as I observed them last week and they spoke a lot in Korean, and not that much in English. ON Monday and Tuesday it went okay, but not great. But, from Wednesday, I got my 15 year old cousin, Lauren who happens to be homeschooled and speaks a bit of Korean (she had Korean friends and picked it up) to come and help out... It really helped keep them focussed and kept them speaking English (as they knew she would understand some of what they were saying! - I call her my secret weapon!). But she had fun and the class enjoyed having her, and I liked having time to hang out with her, so all in all it has been a good plan.

I have found myself starting to speak in clipped Korean style English which is so bad, though! Anyway, it is over tomorrow (we will come to my folks' place and have a "swimming party" instead of class - aren't I the coolest teacher!) and then I will be more focussed on doing stuff with my church and getting to see everyone whom I have seen yet!!
Posted by ywamce at 5:10 am No comments: